The Lookout Tree: A Family’s Escape from the Acadian Deportation 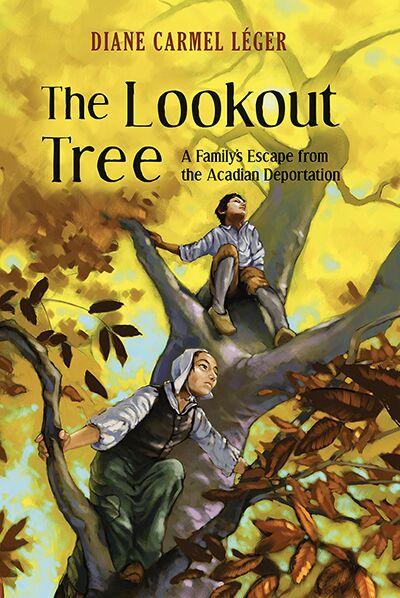 The Lookout Tree
A Family’s Escape from the Acadian Deportation

Acadian author Diane Léger first published La butte à Pétard in 2004, and it has now been translated into English as The Lookout Tree. It tells the story of the author’s hometown, Memramcook, which was destroyed by British troops in 1755 as the Acadian Deportation began. Those Mi’kmaq and Acadians from the Bay of Fundy area who were not killed or deported were forced to spend years hiding from colonial militia and British regulars. Central to this story are brother and sister Fidèle and Prémélia, who find themselves left behind with no other support aside from grandfather Pétard, his friends Kitpou and Rosalie, and a supernatural spirit the Mi’kmaq call a bouhine. The struggle of this small group to avoid capture—and eventually welcome back some of those family members and friends who were deported to the thirteen colonies or the Caribbean—spans more than two decades.

Classroom Connections: This is an engaging story that has a half-dozen black and white illustrations to accompany the text. Léger has crafted a tale that will appeal to young readers (the heroes are children or adolescents for much of the storyline), and the book includes a map, an explanation of old and modern place names, an author’s note detailing some of the background history, and a short glossary of Mi’kmaq and Acadian terms. It should be noted this novel would fit with many provincial curricula in an interdisciplinary fashion (in Ontario, for example, one of the two Grade 7 History strands is “New France and British North America” which includes numerous opportunities to deal with the expulsion of the Acadians and the use of different source material).

This review is from Canadian Teacher Magazine’s Winter 2020 issue.

Better Together: Creating Community in an Uncertain World

The Day You Begin

The Curiosity Of School: Education and the Dark...