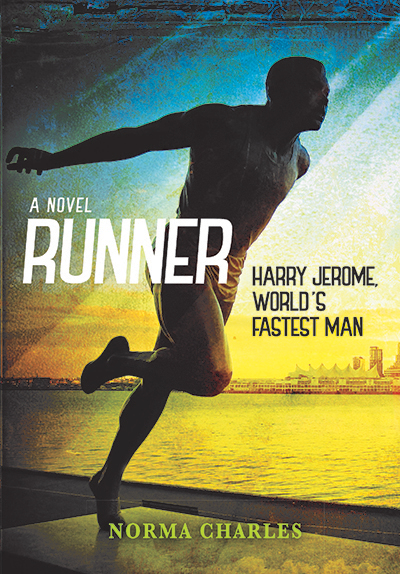 Listed as a children’s non-fiction work on the publisher’s website, this book— about the intriguing and accomplished African-Canadian athlete, Harry Jerome—is nonetheless described as “a novel” on the cover. Author Norma Charles, who actually knew Harry Jerome back in the 1960s, has based much of this story on interviews, as well as primary and secondary sources, but she also admits that essentially “this book is a work of fiction, even though it is based on the life of someone I have come to greatly admire.” Raised in St. Boniface and then Vancouver in the 1940s and 1950s, Henry “Harry” Winston Jerome burst onto the track scene as a high school senior. At the age of 19 he became the world record holder for the 100-metre sprint, and would go on to compete at the Olympics in Rome, Tokyo, and Mexico City; the British Empire and Commonwealth Games in Australia and Jamaica; and the Pan Am Games in Winnipeg. Over that time he faced horrific injuries, a generally negative Canadian press corps, and widespread racism. Despite that, Jerome equalled or bettered more than half-a-dozen world records before he retired in 1968. Charles’ book shows the epithet “quitter,” which was often hurled at Jerome when he failed to live up to expectations at competitions, was completely off the mark.

Classroom Connections: This work, aimed at junior-intermediate level readers, focuses mostly on Harry Jerome’s upbringing and his refusal to submit to the racist environment he was immersed in during his middle and high school years. The author spends fifteen chapters on that period, and just three on Jerome’s running career. But that is understandable since Charles explains she wanted to tell the story of a “kid who overcame tremendous hardships in his life to become the fastest man on earth.” Red Deer Press has not issued a teacher’s guide for this book but there are plenty of other avenues to explore here. For example, the National Film Board has both a short film and longer documentary (“Mighty Jerome”) that also have unit and lesson plans which could be adapted for use with Runner.

Everyone Wins! Cooperative Games & Activities for All Ages

The Big Book of Hockey for Kids