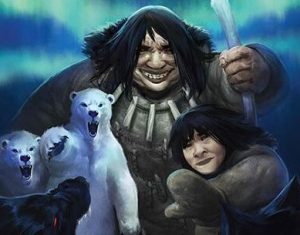 Those Who Run in the Sky

For most of us, knowledge of the lifestyles of indigenous peoples in the North is limited by our exposure to a few documentaries, art shows of Inuit printmaking of the Cape Dorset Collective during the second half of the 20th century, or quizzical pieces of soapstone carving and their replicas on gift shop shelves. As talented writers such as Aviaq Johnston emerge and establish for themselves a rightful place in the Canadian literary community, the mythologies about a “simple” or “cute” culture are being blown away and replaced with top notch fiction which explores and explains the hardships, complex cultures and relationships of First Nations peoples.

Those Who Run in the Sky is a coming of age story of a young hunter named Pitu. Lost in a storm and yearning to return to his family and the young girl to whom he is promised, Pitu descends into the world of Shamanism where he meets mythological creatures from the myths and stories of his culture. There, Pitu is pitted in an epic battle of survival against these creatures. At the same time, he embarks on a traditional quest myth to discover his own true nature while fighting the elements to return home, where ultimately he will lose the woman he loves while finally understanding his path and future role within his community. Those Who Run in the Sky is layered with meaning and open to analysis on several levels. Cultural myths, shamanism, familial relationships, mating rituals, traditional life in the North, community, are all topics explored in this very finely crafted novel.

Classroom Connections: This novel can be used many ways in the junior and intermediate classroom. The mature reader, who likes to take their time and ponder the elements and issues addressed in a good book should be encouraged to try to read this independently. The book can be utilized as a jumping off point for a research project on any number of the topics listed above, or as a good introduction to Indigenous writing which might expose the reader to many of the great adult Indigenous writers such as Joseph Boyden and Thomas King, thereby expanding the readership of a fantastic and notable literary genre.

This review is from Canadian Teacher Magazine’s Sept/Oct 2017 issue.

You Asked? Over 300 Great Questions and Astounding...

Where Will I Live?