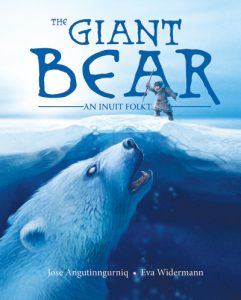 My favourite character in this story was the hunter because he was brave and smart. He takes good care of his family. The story takes place in the Arctic where the family in the story lives in an iglu/igloo. This is a story that was told to the author by his grandfather. This story is about how one family survived a nanurluk, a giant polar bear. A man and his wife lived alone by the sea. The man went hunting one day for seals, but found a large hole in the sea ice. Looking down into the hole the man saw a nanurluk sleeping in the water. The hole was an aglu, which was an opening for the bear to breathe through. The man realizes he must protect his camp from this bear. He makes the aglu smaller so that the bear is not able to get through the hole. The man wakes the bear, but the bear is only able to get his head out of the hole. The man uses his harpoon to stab the bear’s eyes and nose. This makes the giant bear very angry and it claws its way out of the ice. Since the bear is injured it cannot see or smell the man. The man tracks the bear and finds it collapsed on the ice. The meat from the bear feeds the man and his wife for many days and they survive.

This past year I learned about the Arctic at school and this story would have been a good one to read to the class because it talked about the animals and the way the people lived. The illustrations were really well done and showed the reader what it was like in the Arctic.

This book is a good choice for anyone who wants to learn more about the Arctic and folktales.

This review is from Canadian Teacher Magazine’s Nov/Dec 2013 issue.

Moses, Me, and Murder