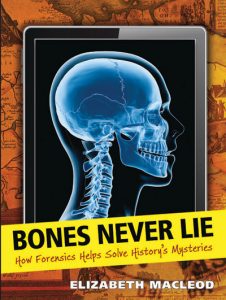 Bones Never Lie is aimed at junior/intermediate students eager to read CSI-like stories. Elizabeth MacLeod decided to focus on royalty and forensics—what she calls a world of “majesty, mystery, and discovery.” MacLeod shows forensic techniques, including DNA testing, CAT scans, and deductive reasoning, have revealed that Anastasia Romanov did indeed die in Russia in July 1918, that King Tut was laid low by malaria, and that Marie Antoinette’s son Louis Charles passed away in prison in 1795. Despite the sub-title, other “history’s mysteries” remain unsolved. For example, we only know the identity of one of the victims of the 800 CE massacre of the Mayan royal family in Cancuén, and we are asked to accept that Napoleon— primarily based on his steadily declining waistline—died from cancer rather than arsenic poisoning. Despite extensive forensic investigations, the case of the Man (or woman!) in the Iron Mask who died in 1703 remains inconclusive, as does the 1946 murder of King Rama of Thailand.

Classroom Connections: Bones Never Lie is rated by the publishers as suitable for grade six and seven but strong readers in grades 4 and 5 would like it too. Many youngsters would be intrigued by gruesome details and little-known facts (cockroaches appear on a corpse “one to two weeks” after death MacLeod informs us, but flies are keen to show up immediately). This is an exceptionally handsome book with clear colour photos and intriguing sidebars focusing on scientific techniques. Perhaps comforting to the increasing number of youth who are more familiar with the internet than they are with books, these pictures and factoids are framed to appear as if they are on a tablet, or a cell phone, or even a smart television.

This review is from Canadian Teacher Magazine’s Nov/Dec 2013 issue.

Creating Caring Classrooms: How to Encourage Students to...

From Bombs to Books