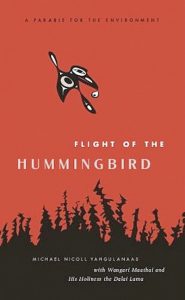 Flight of the Hummingbird is a parable with its origins in the Quechuan people of South America. In this story the hummingbird valiantly tries to put out a forest fire one drop of water at a time. The other animals watch in fear as the tiny bird demonstrates her courage and determination to save her forest home. When the bear finally asks the hummingbird what she is doing, she replies, “I am doing what I can.”

Michael Yahgulanaas has illustrated this book in his distinctive Haida Manga style. This art genre “reflects both his indigenous and colonial heritages and is influenced by his long and active career in social and environmental justice issues” (p. 60 Flight of the Hummingbird). His narrated, animated version of the story is currently available on YouTube. The Foreword is written by Wangari Maathai, a Nobel Peace Prize winner from Kenya, Wangari who established the Green Belt Movement in Africa. The Afterword is written by His Holiness the Dalai Lama, who has supported and frequently spoken about, his concerns for preserving the health of our planet.

Classroom Connections: This Indigenous parable urges us all to do whatever we can to make positive and meaningful change in our world. This message is supported by two of the world’s most influential environmental leaders and illustrated by an internationally recognized artist from Haida Gwaii.

Unspoken: A Story from the Underground Railroad

Environmentalists from our First Nations