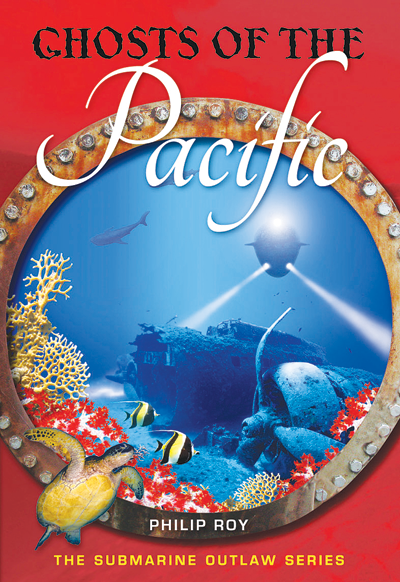 When your main character is admonished by adults to “live a life less dangerous,” chances are he’ll do just the opposite, and that’s exactly what we get in this fourth book from Roy’s Submarine Outlaw Series. Alfred is a 16-year-old Newfoundlander who captains a home-made submarine. He’s travelled around the Maritimes, up the St. Lawrence River and across the Atlantic to the Mediterranean, but now he wants to travel further. He’s decided he would like to explore the Pacific and after evaluating a few routes, he chooses to travel there via the Northwest Passage. He ends up trapped in ice, bumped by whales, and sniffed by a polar bear. Almost every other page is filled with some action or another as he sails through northern Canada.

The North Pacific is no calmer for Alfred. He sees a fishing boat illegally killing all the sharks, dolphins and turtles caught in their net and he decides to sneak up and free the trapped marine life. This is how he ends up shot, drifting feverishly in his submarine until he finds Cinnamon and her circus ship. He sails through an island of plastic and under a typhoon. He free dives to explore the American A-bomb test site, Bikini Atoll, which still has the sunken American warships at the bottom of its lagoon and in Saipan he watches footage of the war, explores the caves, and the Suicide Cliffs. Best of all, Alfred doesn’t sail alone. His first mate, Seaweed the seagull, and his second mate, a dog named Hollie, join him through these incredible adventures.

This story will capture the heart of any explorer, environmentalist, adventurer or history buff. A must for any classroom library, and a real treat for the avid readers in your school!

Classroom Connections: If you’re focussing on building students’ abilities to making connections to the world, this is an excellent resource which highlights our connection to our families and our need to be free to explore on our own. Themes around World War II, soldiers and forgiveness after the atrocities of war are also prevalent. The main theme of this book is caring for the earth and environmental protection for our dying seas.

We Travel So Far…