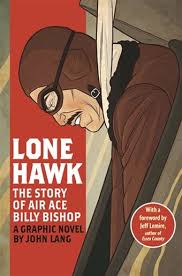 Lone Hawk is a short, telegraphic view of the life of Billy Bishop, a Canadian War Hero. With an economy of words, award-winning illustrator and cartoonist, John Lang, gives us a feel for the times and the trials that deployed personnel faced in the First World War, a hundred years ago. Through the art of a graphic novel, we learn that Billy Bishop grew up in Owen Sound, Ontario. As a hunter, he had a good eye and was an accurate shot. But when he was on the verge of failing the Royal Military College, he enlisted to serve in the war that had just been declared. He was sent to England and fought in the trenches. He soon discovered that there was a better way to do his duty. He proved himself to the commanders of the Royal Flying Corps and after many hours of practice, he had 72 confirmed victories. The Victoria Cross was one of the many medals he earned. But his prowess was to ground him as the Canadian government considered him to be such a valuable symbol of the war effort that it did not want to risk his life further.

Classroom Connections: Although this will not satisfy the curious reader, the reluctant one will love it and all will understand what war was like. Boys tend to glorify soldiers and their “raison d’être.” But through solid action and visuals, the hard facts of war are not glorified but portrayed realistically. See page 53 where Billy and his mechanic discuss the stresses:

“Every day you go from the warm quiet farm down here to the freezing wind and deafening noise up there …where other pilots try to kill you, and your mates die. Some aces have ended up in insane asylums—others have fits of hysteria or take their own lives.”

This is a good way to introduce both the Canadian contribution to the Great War and what price the humans involved in the daily grind pay in any war effort. This book begs more research on the part of the reader.

Turtles All the Way Down

Munro vs. the Coyote

The Seed of Compassion