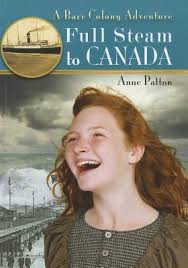 This is an excellent work of historical fiction based on Robert Holtby’s diary—images are included in the back of the book. The main character, Dorothy (Dodie) Bolton, is a child in 1902 Manchester, England, when invitations to the Barr Colony in Canada start to spread through the newspaper and word of mouth. After much deliberation by her parents and after her older brother loses his apprenticeship, the family decides to emigrate to Canada. This is a big change for the Bolton family whose rented home is filled with refined comforts such as a piano and delicate tea set. These are a few of the many frivolous things they need to leave behind as they head for the colony where they will eventually own their own land. From Autumn 1902 to April 1903, we follow Dodie, her family, and many other immigrants on their journey “full steam to Canada.”

Dorothy is faced with a steep learning curve when she boards the ship. The youngest in the family, Dodie has had very little freedom. Not long into the journey, her whole family becomes seasick and she is suddenly burdened with a lot of responsibility and rewarded with much free time. She has to be the messenger, caregiver, babysitter and centre of her family. She makes new friends, gets into quite a bit of trouble on the ship, and eventually finds balance between freedom and responsibility.

This is an in-depth account of boat and train travel at the turn of the century, as well as a great record of the hardships immigrants had to face when settling our great country. The trip from Manchester to Saskatoon is a journey from the civilized and refined city to unfamiliar wilderness. Dorothy ages little in her few months of travel, but she matures an immeasurable amount.

10 Plants that Shook the World