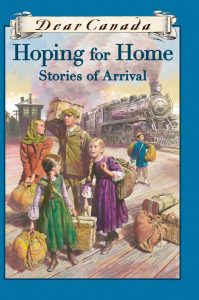 Hoping for Home
Stories of Arrival

This anthology of eleven original short stories by well-known authors in Canadian children’s literature, is part of Scholastic’s Dear Canada series. Like all the previous titles, these stories are written as diary entries and depict events in Canadian history as they would have been lived by the protagonists. Here, the theme is the many reasons people came to Canada and in some cases, were displaced within our borders. We witness their struggles coping and adapting to their new surroundings. Each story is preceded by a short paragraph explaining its historical context. Events range from 1853 (a freed slave family hoping to find no racism in Canada) to 1965 (a Pakistani family trying to escape the prejudice they found in England). One story deals with the internment of the Japanese during the Second World War, and another shows some of the difficulties First Nations face getting medical help.

These stories, written by master storytellers, quickly draw the reader in and make historical events immediate, personal and alive. Every one is unique and so are the voices of the characters. There are enough facts to make one curious and, hopefully, willing to dig deeper into what actually happened “in those days.”

Classroom Connections: The Dear Canada series is a great entry into Canadian history and each title is a discussion starter. What better way to talk about reasons for leaving the old and for coming to a new place, without delving into the students’ stories first. Of course, the next step is a comparison of the different stories, the coping strategies and emulating the journal/diary entries. Curriculum Topics: Immigration and Emigration, Canadian and World History, Human Rights, Racism, Holocaust, Deportations during the World Wars (Japanese, Italians, Ukrainians).

A Walk on the Shoreline

The Caribou Feed Our Soul

Life in the Boreal Forest