The culminating task for the summer was quite straightforward, at least I thought so. The plan for our family was to swim, or more correctly, wade briefly into the chilly waters of the Arctic Ocean, somewhere along the northern coast of Canada. This activity would fulfill #75 on my Life List, that being to swim in all four oceans. It would also give my kids, Ky (age 12) and Hannah (age 10), a remarkable tale to share with their teachers and friends on the first day back at school in September. 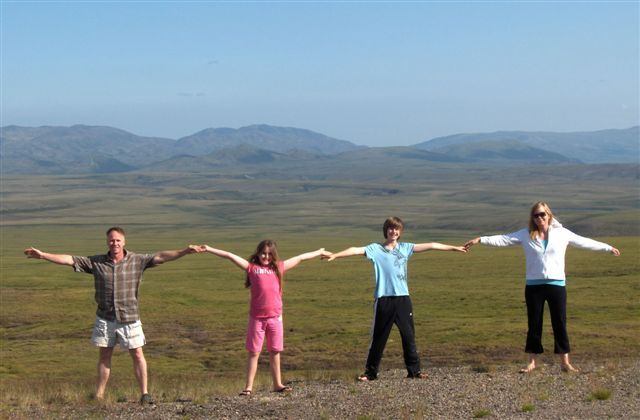 Along the Dempster Highway, Yukon Territories.

The journey was to be a 16,000 kilometre mini-van adventure that would certainly push the limits of that great Canadian tradition—the summer family driving trip. We would start by traversing the continent via the northern American states, head north through Alberta, take the Alaska Highway from Dawson Creek, British Columbia to Whitehorse, capital of the Yukon. From there we would move on to historic Dawson City, and ultimately find our way north of the Arctic Circle on the Dempster Highway. The Dempster would take us to our final driving destination, Inuvik on the shores of the mighty MacKenzie River. From Inuvik we would hire a plane to travel the 160 kilometres north to the Arctic coast. Tuktoyaktuk would probably be our destination, Herschel Island if we were lucky. The return trip would see us circle back through Alaska, northern British Columbia, Alberta and finally home across the Canadian prairies. We anticipated taking 24 to 30 days; we booked nothing.

I won’t mislead you, this trip was a tough sell. The thought of the four of us being packed into a mini-van for a month was not something that extracted a great sense of delight from my family, however, having a vehicle only one-year-old is a rarity in our household, me being prone to late-model, moderately reliable automobiles. This combined with the ages of our kids—we are profoundly aware of the hastily approaching teenage years—created a real sense of now or never for this journey.

Along the Dempster Highway, Yukon Territories.

Before kids, my wife Marie and I were fairly seasoned adventure travelers. We have stood on the summit of Kilimanjaro in Tanzania, encountered sea snakes in the Philippines, trekked in the Himalaya and skied steep and deep in New Zealand. But since our kids were born, our trips have mellowed—Myrtle Beach, Disney World, Quebec, Lake Placid—all wonderful places, but lacking the “seat of your pants” adventure that I affectionately remember from earlier days. This trip would finally introduce our kids to real adventure travel!

The first two days of the trip started out with visits to an Outlet Mall in Michigan and the Mall of America in Minnesota, hardly adventure travel. It was not until we entered North Dakota that my “rough country” theme started to take shape. Teddy Roosevelt National Park provided a superb introduction to the Badlands of the west. Bison, wild horses, the ubiquitous prairie dog and even a Black Widow spider foreshadowed a summer full of superb wildlife encounters.

Off the interstate in Montana, we got our first feeling of solitude. The secondary highway from Circle to Lewistown is a lonely road that few seem to travel. At Sweetgrass, we crossed back into Canada. We moved swiftly to the north of Alberta, as we knew we would spend some time in the south on the way home. At a wrecker in Bar Harbour, we managed to secure the only two spare tires and rims in the province that would fit our mini-van. With these stored in the back, we were now ready to tackle the infamous Dempster, but not just yet.

Few locations in Canada rival Kluane National Park and Reserve for its awe-inspiring splendour. The park is located in the southwest corner of the Yukon bordering on Alaska and British Columbia. Kluane is characterized by soaring mountains and massive ice fields. It is also home to some spectacular wildlife—Dall sheep, mountain goats, caribou, black bears and the infamous grizzly bear all reside in the park.

Although well beyond our resources, we decided to hire a plane to fly us deep into the park to hopefully catch a glimpse of Mt. Logan, Canada’s highest peak. Even though it’s almost 6000 metres tall, the mountain cannot be seen from any roadside access. Flights into the park are always at the mercy of Mother Nature. Our pilot remarked that he had not seen the mountain in two weeks. Fortunately, we were graced with clear skies that afforded us views well beyond Logan, deep into the St. Elias Mountain range, even as far as the Gulf of Alaska coastline. 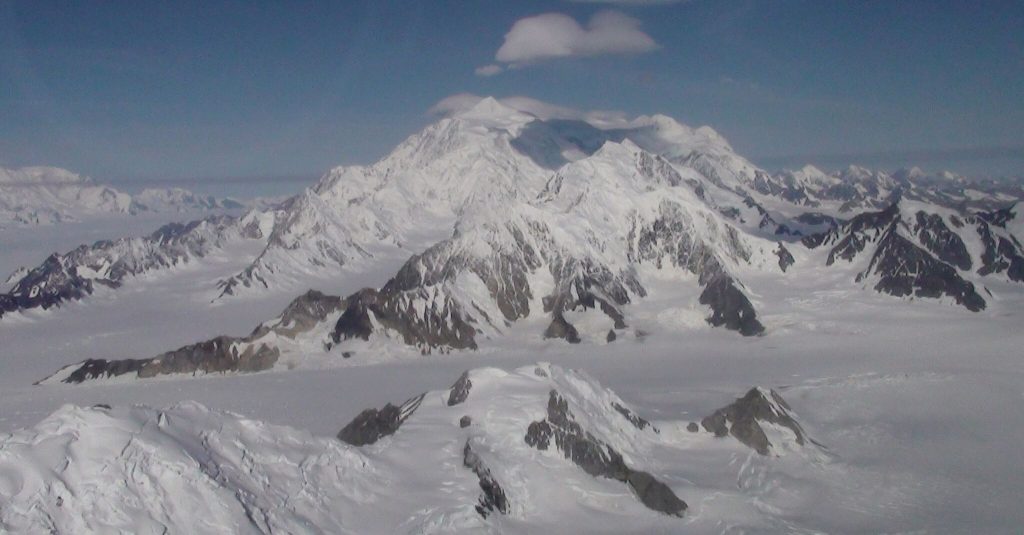 Our time at Kluane was memorable. As well as the flight, we completed a day rafting the Tatsenshini, a Canadian heritage river, and enjoyed a great day of hiking into an alpine meadow.

The final driving leg of the trip would be on the Dempster Highway, truly one of the greatest roads ever built in Canada! Starting just outside of Dawson City, the Dempster is a teeth-chattering, butt-numbing engineering marvel. The 736 kilometre road traverses some of this earth’s most glorious ecosystems. Along the highway, at the fittingly named Two Moose Lake, we actually watched seven moose forage in the shallows for one of their favourite snacks, duckweed. At Eagle Plains we pitched our tent, stayed up until 12:00 and walked around outside as the midnight sun shone down on us.

A day that tested the resolve of our family while traveling on the Dempster was our six-hour scramble up Mt. Goldensides in Tombstone Territorial Park. Ill-prepared? Perhaps. We only had 500 millilitres of water and two granola bars to share amongst the four of us! I knew things weren’t going well when my son threw up halfway up the mountainside. My daughter struggled to hold back her tears for most of the climb. My wife constantly gave me that look that can best be described as the “remind me why I married you” face. In the end, the summit was ours. Ky had recovered enough to make a point of being the first to reach the top. Even Hannah managed a tight-lipped smile. And finally, when she saw the views, Marie was reminded of why she often puts up with my somewhat impulsive ideas. 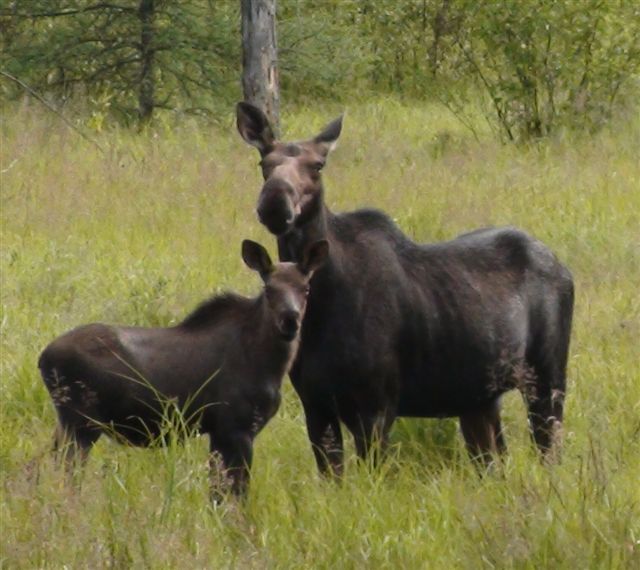 I had always hoped that this trip would offer some life lessons for my kids. One such sobering tutorial was the opportunity to see the Our Lady of Lourdes schooner on display in the high Arctic. Only a generation ago, this weather-beaten vessel plied the Arctic coastline picking up young Innu children in what turned out to be the ominous first leg of their journey to residential school. Our guide, not much older than myself, shared with us that she had taken part in the residential program. I felt a silent lump in my throat as I glanced back at my kids and tried to imagine what my reaction would be to an act of such callous disregard for the importance of family. Later, my son commented on the futility of such a policy. The fact that a 12-year-old could so quickly see the folly that an entire generation of government policymakers had been blind to, was not lost on me. Indeed, lessons would be learned on this trip.

In the end, we made it to the Arctic Ocean, at Tuktoyaktuk to be precise, a coastline Inuvialuit community of around 900. Sure it was nice to check #75 off my list, but more importantly, I’ll never forget the countless adventures our family shared over 25 days and 16,040 kilometres, during what my son has so appropriately named, our Arctic Odyssey.