Tasmania is perhaps one of the most misunderstood travel destinations that I have encountered. Once you get past the confusion with the African country of Tanzania then the two most familiar aspects of this delightful island seem to be the Tasmanian Devil character of Looney Tunes cartoon fame and, running a distant second, its settlement by Europeans as a penal colony. Fortunately, Tasmania has much, much more to offer an inquisitive traveler. Its attractions, both ancient and modern, will satisfy the interests of anyone willing to seek them out. 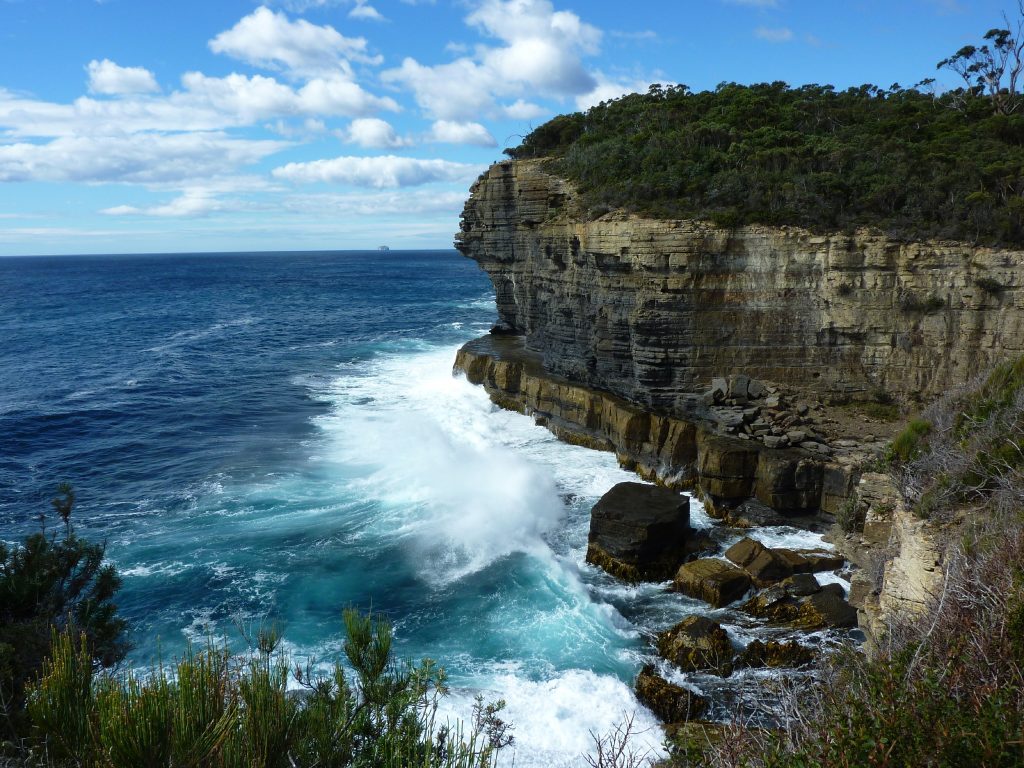 Cliffs along the Tasman Peninsula.

The City of Hobart, the capital of the State of Tasmania, is located on the south coast and lies at the same latitude as Wellington, New Zealand and Puerto Madryn in Patagonia, so travelling there takes you to one of the most southerly populated places on earth. If you haven’t been there, don’t feel badly. Many Australians haven’t either, and it’s one of their own states. Even mainland Australians view “Tassie” as remote and a bit peculiar. When I told several friends in Sydney where I was going I was surprised to hear the same response of “All Tassies have got two heads!” implying in jest that the population is isolated and inbred. I found none of that, of course, and suspect instead that the Tassies started that rumour to prevent a flood of mainlanders to their idyllic little island.

In fact, the island isn’t that little. Roughly triangular in shape with a coastline indented by harbours, rivers and inlets, it measures almost 400 kilometres from the broad north coast to the narrow point in the south, about the same as the distance across its widest part. The geography of Tasmania varies dramatically but the most prominent feature is its rugged mountains. In the west this natural barrier combines with dense forests and river valleys to present an almost impenetrable wilderness. Australia has established an extensive network of national parks in Tasmania to protect this magical inheritance, making up over 25% of the island. The names of some of them, such as Savage River National Park and Franklin-Gordon Wild Rivers National Park, give a clue to their nature. Few roads have been constructed through this dramatic landscape to reach the stark, windswept western coastline, leaving it mostly unsettled.

The pristine state of the natural environment will be a lasting impression of Tasmania for me. In fact, even the licence plates espouse this feature, declaring “Tasmania – your natural state.” Tasmanians are understandably fiercely protective of what they have. In fact, the world’s first Green Party began here in 1972 as an outcome of the opposition to the construction of a hydroelectric dam and is now a strong voice in Australian politics. 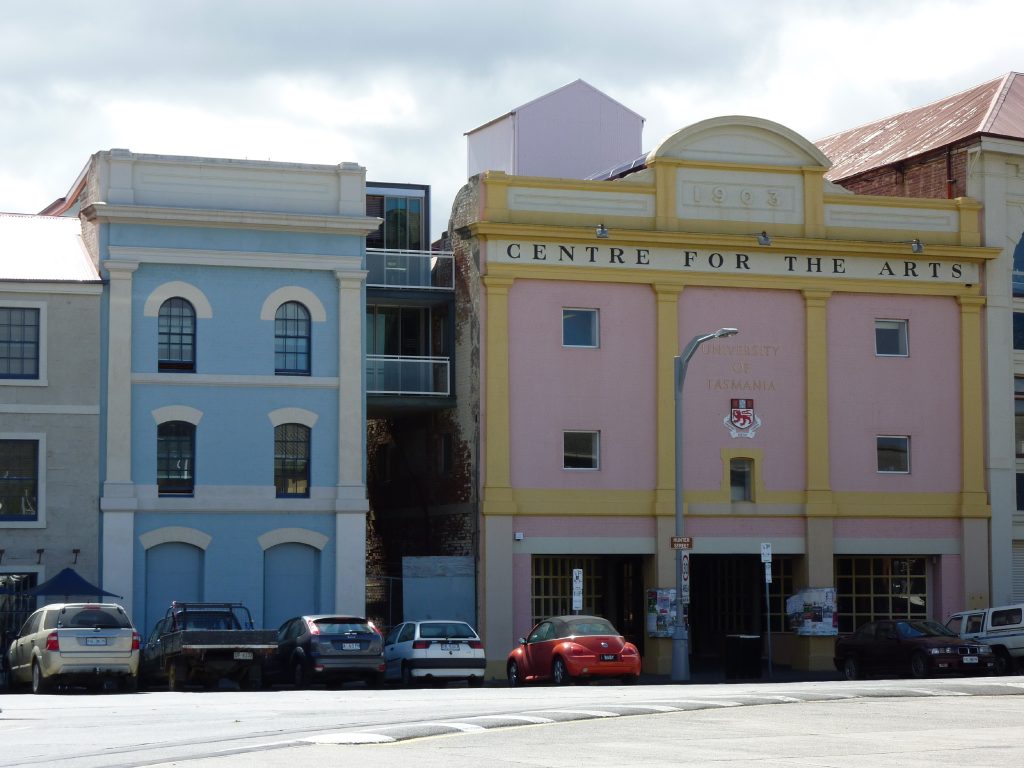 Hobart represents everything both old and new in Tasmania. This cosmopolitan city grew from the early settlements around its excellent deepwater harbour. It was the home for the whaling fleet, the departure point for Antarctic explorers in the late 18th and early 19th century and the centre of government and commerce for the growing colony. The homes and buildings in the city have been well preserved and remind me of an English town. But like many places, the waterfront warehouses have been transformed to accommodate shops, art galleries, cafés and condominiums, central among them being Salamanca Place. There you will also find the Antarctic Adventure museum, with the Maritime Museum nearby along the pedestrian-friendly waterfront and the Tasmanian Museum and Art Gallery only a short walk away.

Hobart is still an active port, with both commercial vessels and pleasure craft sharing the docks. This is the terminus of the Sydney to Hobart yacht race that crosses the often treacherous Bass Strait in late December. When I was there the two Greenpeace vessels that had been harassing Japanese whalers near Antarctica had been impounded, showing that the controversy over whaling is very real here.

I flew into the Launceston airport, located in the north of the state, and rented a car to travel around for five days, flying out of Hobart back to Sydney. Guided tours are also available to those who prefer to leave the driving to others. There are a number of routes that they take covering different island features and destinations. Among them are the West Coast Wilderness Way, Great Nature Trail, East Coast Escape and Convict Trail.

The roads and highways are excellent and, away from the two main cities, uncrowded, which in open areas could lead you to drive too quickly. The authorities deal with this in true Aussie fashion with a safe driving campaign featuring clever signs such as “100. It’s a limit, not a challenge.” They back this up with a photo radar system on the main roads that penalize drivers for speeds exceeding the posted limit by as little as five kilometres per hour. The program, I found after returning home, is quite effective in tracking down violators. I would urge anyone driving in Tasmania to slow down and enjoy the scenery.

And there is so much to see. To the north I found extensive wetlands with an amazing diversity of birds and wildlife along with rolling fields and vineyards. There is a penguin rookery outside of Low Head on the banks of the Tamar estuary (you have to go at night to see them) and the historic lighthouse built in 1833 to mark the perilous shallows at the entrance to the river.

There are scenic routes along the coast and through the mountains, with picturesque landscapes and small villages, although you should be aware that the less travelled roads are quite narrow. The road that leads up through the mountains to the former tin mining town of Derby, for example, is the narrowest road I have traversed on anything bigger than a horse. For nervous travelers, the pleasant Berries Café in Derby is a good place to stop and catch their breath. Continuing on, the road widens and winds through dense forests and farms down to the harbours and sandy beaches that dot the east coast. One of the east coast highlights is magnificent Freycinet National Park midway along the coast. This area is popular with hikers and backpackers, particularly the route to crescent-shaped Wineglass Bay with its fine white sand beach.

Commercial and sport fishing are popular here, as evidenced by the many boats that fill the harbours like that at St. Helens, and highlight just one of the plentiful natural resources that are part of this island’s rich endowment.

There are many unique and interesting aspects to Tasmania but the biggest tourist attraction in the state is the Tasmanian devil. I had the opportunity to see several at a wildlife park near Bicheno on the east coast. Weighing about eight kilograms (the size of a small dog) with a muscular build, these voracious black marsupials come by their cartoon character honestly. You only have to see them eat to understand why. They have a disproportionately large head and neck and their jaws open to almost 90 degrees to expose teeth like a hyena. I learned that they have the strongest bite for their weight of any animal in the world, capable of crushing bone with a force of over 553 N (1,220 lb) and able to kill and eat animals up to the size of a small kangaroo—bones, fur and all. They emit a loud, throaty screeching sound, both as a territorial warning and to signal others of a kill when eating, that can be heard up to two kilometres away. They are nocturnal so this sound can produce some chilling effects if you’re not aware of its source. Go to this link to see and hear it! http://www.youtube.com/watch?v=E3RjAh8PRTQ&feature=related 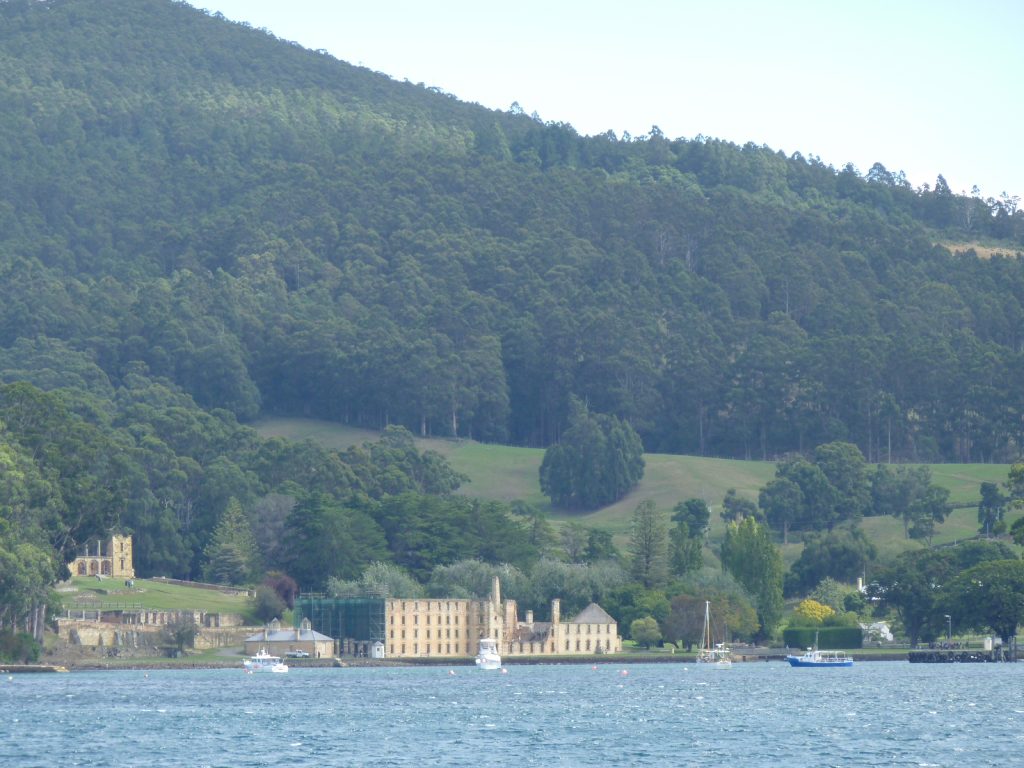 The poor treatment of the Aborigines and convict history can’t be overlooked on a visit to Tasmania. For one thing, unlike the lyrical Aborigine names of many mainland Australian towns like Coolangatta, Mooloolaba and Woolloomooloo, virtually all of Tasmania’s towns have European names. This may reflect the absence of Aborigine influence due to the killing of many of them and banishment of the remainder to outer islands during early settlement. There is now controversy about who, if anyone, is a direct descendant of the original Aborigine population.

The National Historic Site of Port Arthur provides a glimpse into the life of some of the worst convicts in this young colony. These were usually convicts who had re-offended during their period of transportation and were treated very harshly. The location of the penal colony was chosen because of its isolation on the Tasman peninsula where access was limited by a mere 30-metre wide neck of land guarded by half-starved dogs and flanked by waters that were rumoured to be shark-infested.

The remnants of the penitentiary and the church, as well as the intact and restored buildings, are well described and a museum brings to life the people and trades that were practised here. You can even search the convict database to see if a relative had spent time at one of the penal colonies. The grounds themselves are now beautifully landscaped and belie their tragic past. If you take the boat tour you will get a good perspective of the site as approaching convicts would have seen it. Port Arthur was declared a World Heritage Site in late 2010. You can learn more about the history of Port Arthur at http://www.portarthur.org.au/. 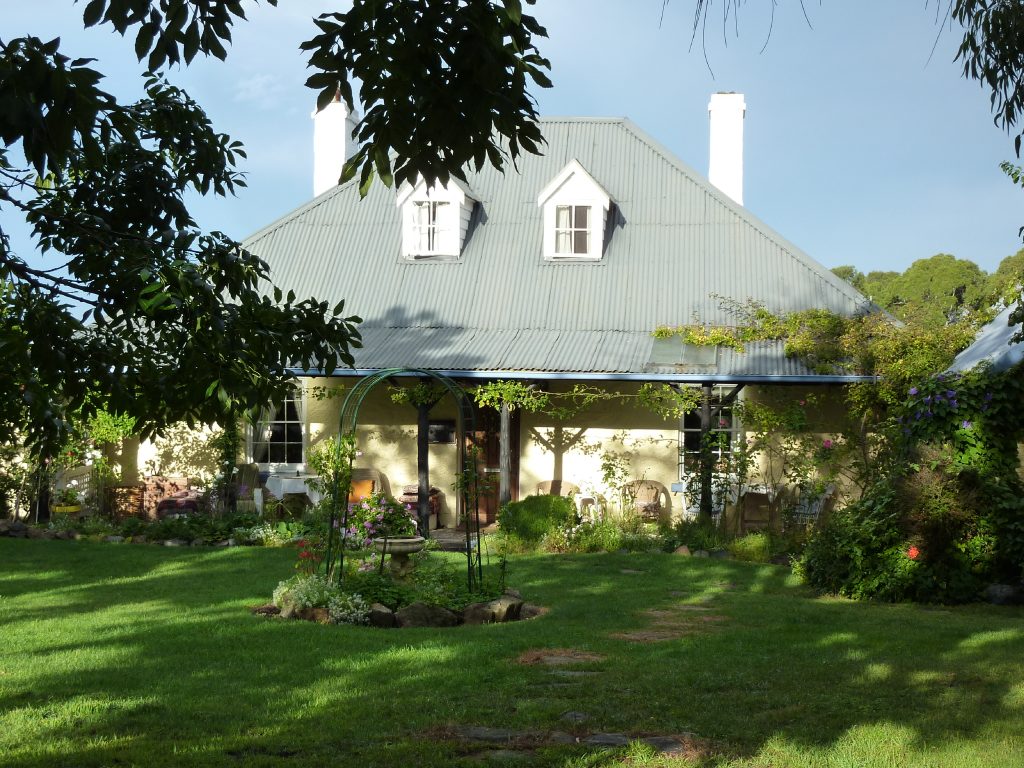 A trip to Tasmania would be incomplete without trying their excellent wines. You will find wineries throughout the agricultural areas and can taste their products at the cellar door or choose them at restaurants along your route to complement the local cuisine. Given the recent excitement about the April British royal wedding, it is interesting to note that Tasmania has its own royal/commoner connection. During the Sydney Olympics in 2000 Crown Prince Frederik of Denmark met Tasmanian businesswoman Mary Donaldson and after a discrete courtship they were engaged in 2003. She is now Crown Princess Mary of Denmark.

There are also some Tasmanian celebrities, including swashbuckler Errol Flynn (who died of a heart attack on a trip to Vancouver in 1959) and Simon Baker, star of the television program The Mentalist. While I didn’t meet either royalty or celebrity on my visit, I did meet and talk to a lot of Tassies and found them to be friendly and genuine and, if possible, even more laid back than mainlanders. I would heartily recommend a visit to this distant island.

Learning to Speak, Speaking to Learn

Passport to the Internet

Changing the World One Pencil at a Time