A new calendar year—a new semester. Teachers and students across the country renew their motivation to learn. Teachers feel a responsibility to train and plan, to educate and inspire our classes, but the ingenuity of young people can teach us all a thing or two! Some of the world’s most clever and creative inventions have actually come from children and teens. Want proof?

Music classes have long taught the composing genius of Mozart as a mere 5-year-old, and the Internet lets us watch a multitude of pint-sized virtuosos today. Art classes expose the mastery of Da Vinci, Rembrandt, and Monet, and provoke students with M. C. Escher, Marina Abramovic, or Liu Wei. Sometimes, however, the master is still a child. Case in point—Aelita Andre.

Aelita is an elementary school girl in Australia whose abstract expressionist artwork gets compared to Salvador Dali and Pablo Picasso. She is already a world-renowned, millionaire painter—and only 11 years old!

English classes have pint-sized powerhouses too.

Iconic Alexander Pope wrote Ode to Solitude in 1700, at the tender age of 12. His sister claimed he was “a sickly child… and all he did was read and write.” Pope finished his major work, Pastorals, at the age of 21.

More modern literary marvels are out there too. Nancy Yi Fan (born in Beijing in 1993) moved to New York at the age of 7. She finished her first novel, Swordbird, by the age of 12. Within five years she was a New York Times bestselling author with three books published, but barely old enough to drive!

Twin brothers, Jyoti and Suresh Guptara, wrote their 700-page epic fantasy, Conspiracy of Calaspia, when they were just 11! They kept rewriting until it was published in India when they were 17. Subsequent translations and foreign publishing deals have made them very wealthy young men and great role models for other student writers.

There are teenaged inspirations for Civics and History classes.

Any idea who Canada’s youngest Member of Parliament is? Pierre-Luc Desseault was elected to the House of Commons in 2011, at the ripe old age of 19. Sam Oosterhoff, another 19-year-old politician, was recently elected to the Ontario legislature. Luke Strimbold became mayor of Burns Lake, BC, at age 21, and at age 29, Karina Gould became Canada’s youngest ever Cabinet Minister. Search them online as lesson prompts to surprise and engage your students.

Most of us know the world’s youngest Nobel Laureate was 17-year-old Malala Yousafzai. She won the prestigious Peace Prize in 2014 for her stand against the Taliban and her fight for girls’ rights to education. She continues to teach and inspire youths and adults alike, and has just released a new book We Are Displaced: My Journey and Stories from Refugee Girls Around the World. World politics and public policy are being shaped by brave, ambitious students like Malala.

Youths have the ability—perhaps a proclivity—to think outside the box. They take more risks. They see problems differently. Consequently, they solve problems more creatively. Isn’t that one of the reasons most of us are in the teaching profession to begin with? It makes for a dynamic workplace.

The world benefits from the inventiveness of young minds.

In 1812, at the tender age of 3, Louis Braille lost his sight to an injury. By the age of 15, he had developed the Braille system. Modifying military code, he created a series of raised dot patterns to function as an alphabet for the blind. His genius still helps extend literacy and empowerment worldwide today.

USA founding father, Ben Franklin, is famous for many things: organizing America’s first lending library and first volunteer fire department, bifocal eyeglasses, and the lightning rod. Did you know, however, that when Ben Franklin was merely 12 years old, he invented the world’s first swim fins?

In 1930, a 16-year-old diver and gymnast named George Nissen stretched canvas over a steel frame to construct a “bouncing rig.” He later used nylon to achieve better bounce. Kids and athletes around the world continue to use his invention—the trampoline.

Sometimes accidents cause inventions, and kids take advantage of these too. In 1905, when 11-year-old Frank Epperson left his drink cup and stir stick on the family porch overnight, the temperature dropped and it froze. He nicknamed his accidental treat the “Epsicle” and began making and selling them at local fairs. Eventually, his own children nicknamed them “Pop’s sicles.” Today, Unilever sells over two billion Popsicles a year!

An American Grade 9 student named Hart Main concluded that the candle industry was dominated by floral, feminine scents. He saw an opportunity and designed “Man Cans”—a new kind of candle. He uses recycled soup cans (donating the soup to homeless shelters) and produces candles that smell of coffee, bacon, campfires or fresh cut grass. Now he is a teen entrepreneur, selling his product online and in stores.

Another school-aged problem solver was Becky Schroeder. She needed a way to complete her homework in dim light. Initially, she put phosphorescent paint on a clipboard under her papers and later, she added a battery source. Now her “Glo-sheet” invention is used by photographers in darkrooms, by doctors doing patient rounds at night, and even by astronauts attending to work when their systems are recharging.

19-year-old UBC student and Canadian inventor, Ann Makosinski, made the “30 Under 30” lists of both Time and Forbes’ magazines. She also won at the 2013 Google Science Fair. Her “Hollow Flashlight” is an LED flashlight powered by the heat of a human hand. Similarly, her “e-Drink” is a mug ingeniously designed to charge or power a smartphone when filled with a hot beverage. Ann blended simple science and innovation, and got the world’s attention! 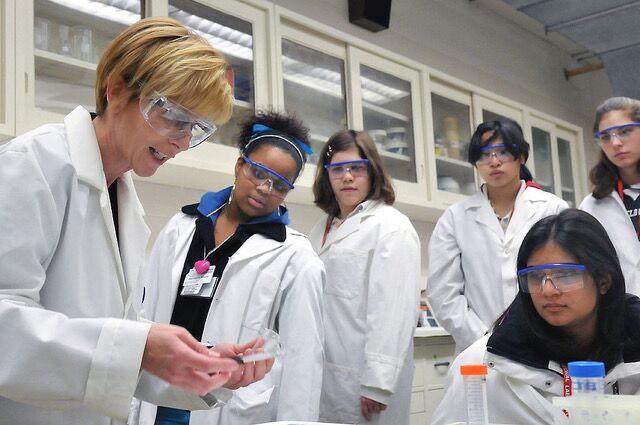 Science teachers will also love these.

Brother and sister teen scientists, Benjamin and Janet Song, invented a urine test that screens for DNA markers associated with liver, colon and other cancers. Their non-invasive test could identify cancers long before more physical symptoms appear! It is currently in clinical trials.

Daniel McInnis helped create a high-resolution 3D medical scanner to reduce the cost of prosthetic limbs. His youthful ingenuity won him the Best Project Prize at the 2015 Canada-Wide Science Fair and continues to profoundly benefit patients and their families.

When Amit Scheer and Aditya Mohan were high school seniors in Ottawa, they won science fair prizes and medical recognition for developing nanoparticles to bioengineer the common cold virus to target and fight cancer cells!

Teenaged experimenters and inventors are taking the science and tech worlds by storm. Google Science Fair winners prove it. 15-year-old Sabrina Hundal developed a method to harness the kinetic energy produced when water freezes! 18-year-old Nivatha Balendra discovered a bacteria in soil that has the ability to ingest oil. Her discovery could be revolutionary in oil spill cleanups around the world!

So as the new year gets underway, challenge yourself and your students! Look to youths who have led the way. Turn a problem into a solution. See something that others have missed. Get inspired by kids and teens who experiment and solve dilemmas in unexpected ways. As we guide and educate the kids in our classes, they’ll keep inspiring us.

Maria Campbell
Maria Campbell (Oct. 1991) teaches at Lester B. Pearson High School, in Ottawa. She also loves writing fiction and non-fiction, designing curriculum, photography and travel. Maria is a wife and mother, and a lifelong learner.

This article is from Canadian Teacher Magazine’s Winter 2019 issue.