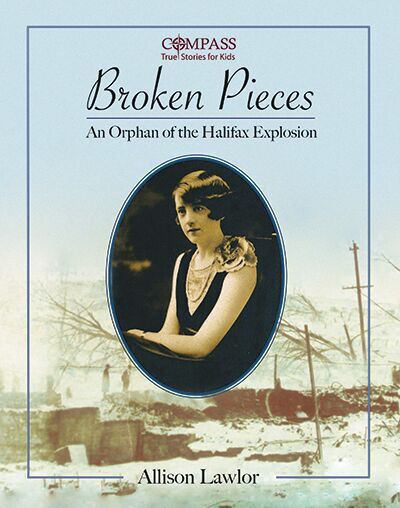 Broken Pieces
An Orphan of the Halifax Explosion

This handsome, full colour, non-fiction work covers a well-documented event. But Allison Lawlor has crafted an engaging account of the explosion and its aftermath based on both secondary sources and archival research. The explosion that levelled much of Halifax in December 1917 is brought to life anew by an account of how the disaster affected one family in particular. Fourteen-year-old Barbara Orr was left an orphan by the events of that day, and while telling her tale, Lawlor offers a remarkably vivid account of wartime Halifax, its inhabitants, and the impact of the explosion on the city and the regions beyond. On that day, whole neighbourhoods, including the Turtle Grove Indigenous settlement, were wiped out by the blast from the munition ship Mont Blanc. The author also recounts how relief poured in from across North America and how Halifax—with planned communities like Hydrostone—eventually recovered. Photographs or illustrations exist on almost every page, and there are numerous sidebars, a glossary and website links, as well as an index.

Classroom Connections: The Halifax explosion appears at various points in provincial social studies and history curricula (for example, in grade 7 in the Atlantic region and grade 10 in Ontario), but this book would serve most Canadian students well as a source for inquiries. Using the information within, students could create posters about the tragedy, make a pictorial storybook of events, map the path of destruction, stage interviews with survivors, or re-create the experiences of other characters mentioned in Broken Pieces.

A Walk on the Shoreline

Queens of the Ice