Musicals on stage, screen and television are a few of my favourite things because they are full of creativity. My attendance at numerous stage and film musicals has enriched my life. Musicals are prime examples of creativity around the globe because of the creative teams that produce them—composers, lyricists, actors, set designers, choreographers and technicians, among others. As a teacher, I discovered that musicals are also rich resources for student creativity. The song “Pure Imagination” from the musical film Willy Wonka and the Chocolate Factory captures the spirit of creating musicals. It invites the integration of musicals into student learning and our students’ own creative processes.

Musicals in the Curriculum

With careful planning, musicals can be utilized as powerful authentic educational resources. Teachers can capitalize on musicals’ themes to create meaningful, effective and personally enriching and creative lessons that support the curriculum.

Because musicals have strong storylines, their themes, settings, characters, time periods and songs can enrich subject area and interdisciplinary lessons at all grade levels. Because the popular songs in musicals are rich in themes, poetry and meaning, they are ideal for creative lessons and units. Because musicals are lively, full of music and complex and rich in themes, students become engaged in activities, projects and direct instruction that get them fully involved. Musicals can be powerful because they:

Each musical has many facets that invite creative learning experiences. These include acting, sets, character development, songs, costumes and technical components. Although the use of musicals is often performance-based—a valuable creative process—musicals can also be utilized as source material for student learning without the performing arts as the central focus.

After I became the faculty contact for integrating musicals, we staged eight classic musicals—Carousel, Bye Bye Birdie, The Boys from Syracuse, The Music Man, Hello, Dolly!, Anything Goes, Into the Woods and The Boy Friend. These shows invited themes to foster learning, songs to learn and settings to explore. I researched each musical and wrote comprehensive study guides for teachers, cast members and students in their classes. I gave an audiovisual presentation to cast members at the first rehearsal for six musicals. Study guides were distributed and reviewed in order to provide cast members an in depth overview of the musical they would be staging. I also assisted faculty in devising activities and projects tied to a musical’s themes and songs involving students in regular classes not normally involved in a school musical.

The following questions are key when planning a school musical to foster creativity.

Creative components of musicals invite linking them to the curriculum. Teachers and students can undertake a plethora of creative activities inspired by musicals. Consider the following:

Shelley Carson discusses all aspects of creativity in her book Your Creative Brain. This book is ideal for educators who wish to incorporate creativity into student learning.

Teachers can design learning experiences that link musicals to creativity. Consider the following examples from the eight musicals that I directed, and others from my classroom practice.

Fabric Arts: Students create a quilt, scarf, cloak or other article of clothing based on research, written text and artistic design.

Display Case: Students produce a creative display tied to the themes and songs of one musical. Our Boy Friend display showed a beach complete with sand, waves, white buildings, terracotta roofs, beach umbrellas and sheet music from the score.

Stained Glass: Students create lettering or graphics of themes from a musical. For Into the Woods, students created fairy tale inspired images such as Little Red Riding Hood and the wolf.

Foods/Baked Goods: Students research, prepare and sample foods related to the ethnic cuisine aligned to a musical’s setting or prepare creative baked goods with frostings and decorations that highlight musicals’ themes or songs.

Literary or Song Analysis: Students analyze dialogue or song lyrics from a specific musical. The song “You’re the Top” from Anything Goes inspired two projects. The many references in the song inspired a project whereby students researched a specific reference, had a cast member pose with an image of the reference and wrote text in Spanish or Italian.

Great Performances: Students perform a show tune alone or with others. As a variation, they can innovate by varying style, arrangement, tempo or genre. For example, students could perform “Over the Rainbow” from The Wizard of Oz as a rap or hip hop song.

Languages: In my Spanish and Italian classes, I have used dubbed versions of the films The Sound of Music, The Wizard of Oz, Mary Poppins, Mulan and Man of La Mancha. Students compared song lyrics in English with the target language. One year, my students of Spanish learned a few songs from The Sound of Music with Spanish lyrics. One group performed one of the Latin songs “Morning Hymn” with four-part harmony for the class.

Because musicals are a creative endeavour, they can serve as key resources for students and teachers to foster creativity through assignments and projects. The musicals’ themes also invite students to create original projects. Musicals promote creative learning through pure imagination!

Dedication
I dedicate this article to the memory of my mother, Mary Ann Mason, and father, Kevin L. Mason, who encouraged my love of musicals. 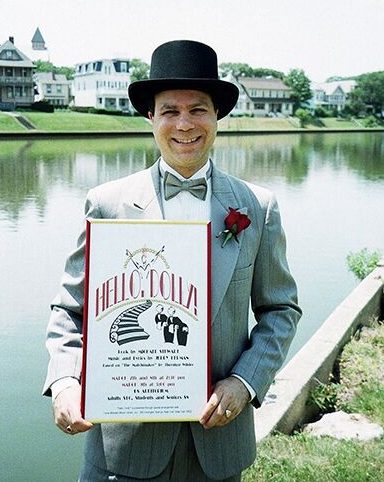 Keith Mason
Keith Mason, Ph.D. is a researcher and educator based in New Jersey who specializes in language education, curriculum, phonetics, Romance linguistics and musicals in the curriculum. He has received eight Paper Mill Playhouse Rising Star Awards for integrating musicals at the high school level. kmason369@hotmail.com