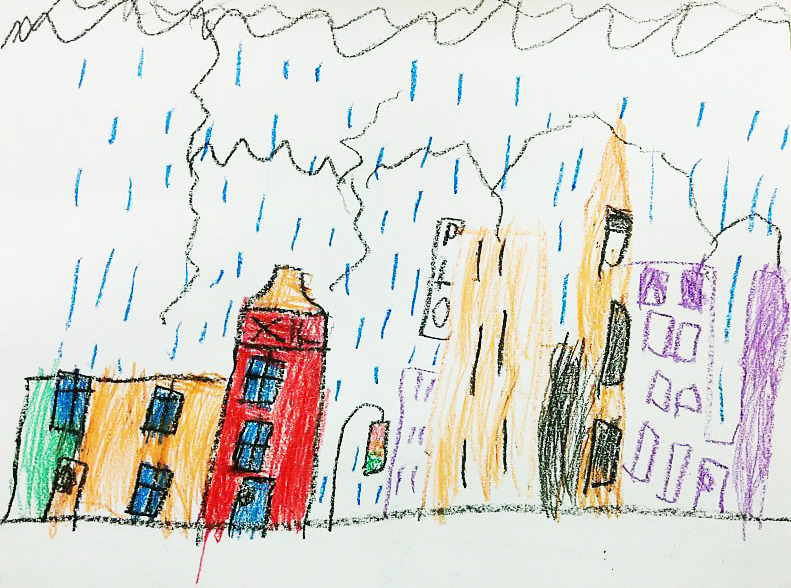 “A kindergarten student reveals an understanding of spatial relationships when he explains that it is raining “in the distance—behind” the buildings. “See?” he says. “There’s no rain on the street in front of the buildings.””

In 2012, Cathy Bruce, Joan Moss and John Ross conducted a large scale survey about the mathematics teaching practices of kindergarten to grade two teachers. It reveals that educators spend the least amount of instructional time in mathematics on geometric and spatial thinking. This is clearly at odds with the current research on mathematics instruction for Year 1 and Year 2 kindergarten students and puts the students at a significant disadvantage when it comes to their overall education. In a 2016 follow-up to their survey, Bruce and Moss teamed up with Bev Caswell, Tara Flynn and Zachary Hawes to produce the book Taking Shape: Activities to Develop Geometric and Spatial Thinking Grades K – 2. In it, the authors point out that spatial reasoning at age three is a better predictor of general mathematics ability at age five than language is, and that spatial reasoning experiences at an early age are very important in the development of both numerical and problem-solving abilities.

A research report in 2009 by the U.S. National Research Council’s (NRC) Committee on Early Childhood Math, titled Mathematics Learning in Early Childhood: Paths Toward Excellence and Equity, provides the definitive argument for spending more instructional time in kindergarten on geometric and spatial skills. The report recommends that mathematics experience and instruction for pre-school and kindergarten children aged three to six years of age concentrate on three topics: number sense and operations, geometry and spatial skills, and measurement. Of these three topics, the primary emphasis should be on number sense and operations and the secondary emphasis on geometry and spatial skill development. Although measurement ideas in these grades are also important, the NRC report advises that it is only necessary to introduce them as broad concepts. Patterning, probability and data management can be woven into work in the first three strands, with only a small investment of class time.

What is spatial reasoning?

In 2006 the NRC defined spatial thinking or spatial reasoning as involving the location and movement of objects and ourselves, either mentally or physically, in space. It is not a single ability, skill or process. It incorporates numerous concepts, processes and tools to represent and communicate ideas about space and spatial relationships. In their 2015 publication Spatial Reasoning in the Early Years, researchers Yukari Okamoto, Donna Kotsopoulos, Lynn McGarvey and David Hallowell identify four key components of spatial skills:

What is the importance of spatial skills and geometry concepts?

The 2014 Ontario Ministry of Education monograph, Paying Attention to Spatial Reasoning, makes a powerful argument that spatial skills are extremely important for successful mathematics performance across curriculum strands and for conceptual understanding of numeric quantities, arithmetic, word problems, measurement, geometry, algebra (patterning) and calculus. Brian N. Verdine and three of his colleagues, Roberta Michnick Golinkoff, Kathryn Hirsh-Pasek, and Nora S. Newcombe summarized a large body of research on the topic in their 2014 article “Finding the Missing Piece: Blocks, Puzzles, and Shapes Fuel School Readiness.” They conclude that more sophisticated spatial reasoning improves the quality of children’s early mathematics performance. In one study, the spatial skills of five-year-olds predicted their approximate symbolic calculation skills at age eight, mediated by their linear number line knowledge at age six. The team also determined from research evidence that spatial ability is connected to understanding numeric quantities (i.e., subitizing) and to early numeracy performance. Researchers theorize that children who develop better spatial representations of number earlier than other children may be able to build on this knowledge to learn other numerical concepts, such as number line estimation, magnitude comparison, numeral identification, counting and place value. Spatial thinking also seems to support reasoning in areas which aren’t obviously spatial. In their 2010 article, “Early Education for Spatial Intelligence: Why, What, and How,” published in Mind, Brain, and Education, Nora S. Newcombe and Andrea Frick point out that Venn diagrams can be used to solve logical problems. Graphs, tables and other data displays are tools for thinking which allow children to find patterns and make comparisons. Maps have the capacity to visually show the distribution of variables such as population density or natural and economic resources.

Why spend increased time on spatial skills in pre-k and kindergarten?

During the past 25 years, educational researchers have confirmed that the period from pre-school (age two) to grade two is an optimum age to improve and expand a child’s spatial skills. In his 2011 article for Science, “Effectiveness of Early Educational Intervention,” W. S. Barnett reports that numerous studies find that preschool intervention in spatial skills instruction is surprisingly effective. Verdane and his three co-authors mentioned earlier, expand on this idea. They quote convincing evidence that spatial skills can be improved with practise, that these improvements endure over time, and that improvements on one type of spatial reasoning task frequently transfer to other types of spatial tasks, even at relatively young ages. In addition, researchers have documented some straightforward but effective play-based, inquiry learning activities which clearly improve spatial skills in young children.

Another compelling reason to give priority to spatial reasoning instruction in kindergarten classrooms is that the school setting seems to be an ideal place to practise these skills. In their frequently quoted 1998 study published in Child Development, Janellen Huttenlocher, Susan Levine and Jack Vevea show that children’s spatial abilities grow during the school year but stall during the summer months. Finally, improving spatial skills has also been shown to overcome gender and socio-economic barriers to success in mathematics in school and to gainful employment in the labour force – especially certain careers such as those in science, technology, engineering, art and architecture and mathematics (STEAM) careers.

How can spatial reasoning be improved?

The research literature indicates that it is relatively straightforward to improve the spatial reasoning abilities of children. It can be accomplished when adults interact with children during their play with spatial toys such as blocks, puzzles, Duplo®, Magna Tiles®, pattern blocks and attribute blocks. They key factor influencing spatial skills development in this case are the spatial words, gestures, questions and challenges that the toys and the play evoke from adults. Temple University researcher Nora Newcombe adds that educators can support young children’s spatial reasoning skills by reading them “spatially challenging picture books.” These are books which examine scenes from various angles or perspectives, include maps and spatial language, or whose illustrations require close attention to decipher their meaning. Some researchers have investigated the use of video programs, video games and tablet and phone apps for the spatial training of young children. In their 2014 article, Verdine, Golinkoff, Hirsh- Pasek and Newcombe urge caution about their use with children aged two to six because of the importance of adult interaction, which is what precipitates the development of spatial language and gestures.

What spatial skills deserve the attention of educators?

In the classroom, there are two places where pre-school, kindergarten and early grade educator interventions make quantifiable improvements. The first domain is maps and models. According to research by Okamoto, Kotsopoulos, McGarvey and Hallowell, intentional educator interactions have a moderately high ability to improve this spatial skill. The second area which warrants attention from educators is the mental transformation of objects such as rotating, folding, cross-sectioning and deforming.

There are two other areas of spatial skill which Okamoto and his colleagues are confident can be improved with training, but further study is needed for proof of this claim. One of them is navigation and perspective taking. This spatial skill includes perspective taking, self-locomotion, spatial language and gesturing, as well as direction, distance and angle in 2D surfaces and 3D environments. The second is training children in 2D shapes (figures) and 3D solid objects.

What does a research-based kindergarten mathematics curriculum look like?

Some provincial education departments are beginning to recognize the importance of providing spatial and geometric experiences in the early years. In July 2016, the Ontario Ministry of Education published a new kindergarten document, The Kindergarten Program 2016 which is aligned with current research on spatial reasoning in the early years. It states on page 75 that “spatial thinking skills and geometric reasoning play a critical role in the development of problem-solving skills, mathematical learning, and reading comprehension.” The program sets out Ontario’s two-year math curriculum for Year 1 and Year 2 kindergarten students. It lists 28 specific curriculum expectations, five of which are spatial and/or geometric in nature. It also lists eight age-appropriate conceptual understandings for spatial and geometric thinking. Like many provincial curricula, its shortcoming is that it fails to explain in what measure and to what extent these numeracy outcomes should be taught. As every teacher knows, not all curriculum expectations have been created equal.

Fortunately, in 2010, the U.S. National Council of Teachers of Mathematics and the U.S. National Association for the Education of Young Children co-published a series of slim but well researched, informative and easy-to-read handbooks for early years’ educators which distill and transform the lengthy Mathematics Learning in Early Childhood into age-appropriate pre-k and kindergarten mathematics programs. Focus in Kindergarten: Teaching with Curriculum Focal Points and Focus in Pre-K: Teaching with Curriculum Focal Points were co-written by three experts on early mathematics learning – Karen Fuson, Douglas H. Clements and Sybilla Beckmann. In their two books, the co-authors set out, explain and illustrate evidence-based, age-appropriate mathematics programs. They elaborate improvements to spatial and geometric thinking instruction in the broader context of an entire kindergarten math program so as not to inadvertently emphasize one strand of instruction at the expense of another important one. For example, the authors of Focus in Kindergarten spend thirty-six pages on Number and Operations, twelve pages on Geometry and Spatial Reasoning, and six pages on Measurement. Using a crude application of content analysis, a research method for systematically analyzing written, spoken or visual communication with a quantitative description, the number of pages devoted to each math strand in the Fuson-Clements-Beckmann curriculum breaks down as follows:

The point of the above exercise is not to provide an exact formula for teaching mathematics in kindergarten, but to remind educators that not all curriculum expectations are equal, and that emphasizing the need for improving one area of instruction does not mean abandoning another.

Evidence-based information from our classrooms to yours

A group of a dozen kindergarten teachers and early childhood educators from three contiguous district school boards in Ontario have joined forces and taken up the challenge to help our young students improve their spatial and geometric thinking – but within a balanced numeracy program. We have created an open, public knowledge-building and classroom action research wiki at kindergartenspatialreasoning.wikispaces.com/ as a first step. We hope to receive a Teacher Learning and Leadership Program (TLLP) project grant from the Ontario Ministry of Education that will enable us to conduct and disseminate evidence-based classroom research in 2017/18. In the meantime, we are identifying, reviewing and posting useful professional books and articles on our wiki, as well as effective spatial picture books, toys and activities which promote spatial thinking and reasoning and that can be used as provocations to inquiry learning.

Edward Schroeter, B.J., B. Ed., OCT, Reading Specialist, Kindergarten Specialist, Special Education Part 2, FSL-1, Library Resource-1, was trained and worked as a newspaper reporter and documentary video producer. He is a six-time national award-winning playwright and producer of theatre for young audiences. He has taught Core French, French Immersion SK, Grade 3 French Immersion, Grade 4 and kindergarten for the Kawartha Pine Ridge District School Board and the Peterborough County Board of Education, for the past 24 years.