Reading Music: Children’s Music Books for Inside and Outside the Classroom

About a year ago I caught myself being very excited to claim an empty seat on a long subway ride in order to read a series of children’s books about music. At my age—which shall remain a national secret—you’d think I would be immersing myself in classic literature in my spare time. However, I find my time being used to look for music related children’s books that my students will enjoy and, more importantly, learn from. I pride myself in the ability to say “if I like this book, a 5-year-old will like this book ” (because we think alike!). 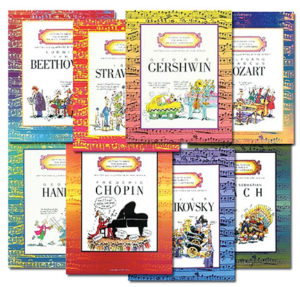 As a young music teacher, I thought my job was to open my students’ minds to the world of music through a musical instrument. However, I quickly found out that I can do much more than just familiarize a student with a particular instrument once a week. How much more fulfilling and rich would the music experience be if students were surrounded with books about music, composers, instruments, music history and artists’ stories to inspire them? As I learned to teach, I came to believe that my students should be knowledgeable about at least three things to start with—instruments, composers and why to study music.

There are many kinds of musical instruments from different cultures around the world, and if you take a trip to the local library, buried somewhere deep in the (frequently minuscule) Arts & Music Performance shelf of the children’s section, you will find books introducing the instruments. Most commonly, these books include a run-through of each instrument that is typically found in a symphony orchestra. To be honest, many of these books do a good job in providing simple historical or technical information, but they soon grow dull. An exception to that observation is a charming children’s book about getting to know the musical instruments—Out and About at the Orchestra by Barbara J. Turner. I believe that this particular book could be very useful in a music class environment. The idea of the children in the book getting a tour of an orchestra concert hall would immediately make the students in the classroom feel as if they too are joining in on a special behind-the-scenes tour of the musical instruments’ world. The representation of each instrument as a member of a particular family, such as the strings, the woodwinds or the brass, is an effect way to show how each instrument’s attributes and gifts unify not only the section they belong to but also the entire orchestra. The book’s story concludes with the orchestra performing in a concert which reminded me of my school trips to the orchestra when I was young, and could perhaps provide an incentive for other teachers and schools to arrange such field trips. Finally, the very end of the book provides instructions on how to make your own percussion instrument—a rain stick. I believe this is a great idea for the classroom! Students can not only help each other in making their very own musical instruments but also express their individual personality in colouring and decorating it as they take their first steps in becoming great artists! Speaking of great artists, I wonder what a Beethoven concerto for a rain stick would sound like…

Learning about famous composers is a good way to have a well-rounded music awareness and the additional dimension of historical knowledge. However, many biographies of Bach, Beethoven, Mozart, Brahms, Tchaikovsky, Vivaldi, Handel, Chopin, Liszt or Stravinsky… well, they can be a bit much. What 9-year-old will pick up a thick book and read about Beethoven’s life? As music students progress into learning their instruments, they will sooner or later be expected to learn and perform compositions of a number of famous composers. Besides the technical requirements that a piece of music demands, the interpretation of that music is just as important. The students will have to be familiar and read about the composers, their lives, the time periods they lived in and the type of music they composed.

For a young student, getting to know the world’s greatest composers should be educational but also fun. Let me introduce Mike Venezia’s Getting To Know the World’s Greatest Composers. This is the children’s book series that had me rushing to find an empty seat on the subway because they provide a unique balance of fun and fact! These books could work in a number of different settings. In a classroom they can provide detailed information of a specific period of time that a composer lived or the type of music he composed for group study. However, in my opinion, they are most effective for a student’s private instrumental lesson and not necessarily just to be read in class. The use of real images and paintings alongside humorous illustrations make even the most mundane information memorable. Each composer’s biography is moulded in such a way that by the end of the book any reader, whether they know music or none at all, can come away with a good grasp of the composer’s essence and even their personality. For a young music student, all this knowledge is extremely helpful in understanding music more deeply than only learning the black notes on the page.

Music certainly has quite a history—in fact, the arts in general have a knack for making history. Another children’s book entitled When Stravinsky met Nijinsky by Lauren Stringer is one that captures a moment in history that students can enjoy in their own time. The biggest benefit of reading this book is not to gain technical knowledge or improve a musical performance, but rather to be exposed to a brief example of the unique abilities of music itself.

The premiere of the music and ballet performance of Igor Stravinsky’s The Rite of Spring in 1913 marked a turning point in the arts. Up until the turn of the century, any dissonances and extravagant musical choices were almost unthinkable. Stravinsky’s music took chances and was both praised and despised, as is any foreign idea until it has proven its merits against the test of time. It’s important to note that this first performance of The Rite of Spring caused riots in the streets of Paris. This children’s book introduces a fresh new perspective on music through a real story, interwoven imaginations of two artists, strong feelings and of course exuberant drawings that represent the changing times of that period. Just as music notation helps one read music, and practise helps to perfect it, stories like When Stravinsky met Nijinsky provide the artistic nutrition that helps fuel the other two.

Let’s think where music comes from—it’s an art that lies naturally at the core of the human psyche and it is impossible to keep it bottled up inside. Artists are really good at expressing that art but it’s important that everyone shares it. Probably the most common reason for saying why someone should take music lessons or learn a musical instrument is to a have a way to express themselves. That may not mean just for the purpose of having fun or simply enjoying a song but could also be a good way to come up with new ideas, do a little bit of self-discovery or even potentially push cultural boundaries and innovation. Inspiration is key to exploration and there’s no better time in life than childhood to explore the arts.

As we have heard countless times before, music is a universal language as well as a powerful and daring force. It constantly proves to be a smart choice to have this art form in our lives and I strongly encourage you to introduce it in the lives of your students in order to enhance their natural creativity. When introducing young minds to the arts, it’s most important to guide them through options, a few figures of inspiration and trust in the strength of their imagination.

Eriona Jaupi
Eriona is a cellist in Toronto and a dedicated music teacher at the Grand Staff School of Music. Her days are filled with cello and/or piano lessons, an infinite variety of tea and conversations about the role of music in people’s lives.

Learning from Aboriginal Youth Transitioning from High School to University