Throughout many cultures and fields within our society, the term “gender” is used to classify and categorize a person’s sex. Being categorized as either male or female has with it societal views of how that gender should act, dress, and in essence, behave in the world. This is a problem. Gender is a mere construct brought on by a need for individuals to be classified by culture and society, while sex is the biology of an individual. Although in many cases the gender and sex of a person are congruent, this is not true for every individual. It is due to this fundamental problem that many difficulties arise for the those individuals, their families and friends. 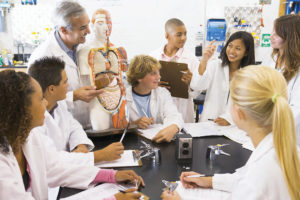 For example, there exists a plethora of research on student learning and safety (Learning First Alliance, 2001). Simply put, if students feel safe, they will be more successful. It is troubling then to find that “almost two thirds (64%) of LGBTQ students and 61% of students with LGBTQ parents reported that they feel unsafe at school” (Taylor et al., 2011). These troubling statistics call upon all members of the school community to address harmful school atmospheres. Thankfully, many facets of a school do this. There exist clubs (such as Gay Straight Alliances and Queer Student Centres) that aim to better the school climate. There are even courses that encourage students to think critically about these social issues such as English and Drama, and Health and Physical Education. However, not being an English, Drama, or Physical Education teacher, and not being a member of an advocacy club, I wondered if I could participate in addressing issues of sexuality and gender as a science teacher. I wondered could I do this, and more importantly, should I?

The first step I took to understand if I could address these topics was looking at the curriculum. By reading the Ontario Science Curriculum (2008) through the lens of social justice it became clear that I could. The Ontario Science Curriculum (2008) clearly points out that the purpose of science is educating young individuals and making them successful members of Canadian society. It states that a scientifically literate person is needed in a society that has a growing use and dependence on science and technology. It mandates that students must be able to think critically about science and technology—understanding where it comes from and its influence on society and the environment— as well as learning the processes and methods of scientific inquiry. In fact, in the curriculum documents for grade nine through grade twelve, there is always an emphasis on how science impacts the world around us, regardless of specific content. It is therefore in the teacher’s power and responsibility to bring to light current issues of society and the environment that can be explained, interpreted, and analyzed through science. It is through this lens I believe a teacher could pursue social justice and equity issues in conversations about gender and sexuality.

Now that I had confirmed a science teacher could address these topics within the curriculum, I had to wonder if I should. For example, there is the superiority complex that science and some science educators carry—a notion that science is socially neutral and above culture. In addition, there is the ever-present debate of coverage and time. Teachers commonly lament that there is already too much to teach in the science classroom, so why take the time to do something the social science department can do just as well?

My academic answer for science vs. social science echoed the author Fausto-Sterling (1997) when she pointed out norms of reaction. This is the idea that both the nature (biology) and nurture (environmental and social interactions) of any organism must be taken into consideration to achieve the greatest understanding. She states that for every social science explanation there is an equally valued and needed scientific explanation. In essence, both fields need to work together to build the fullest picture of any topic. With this in mind, it became clear that when addressing such capacious subjects as gender and sexuality it would be an error to present only the social sciences (or sciences) epistemology to students. If students are learning and discussing gender and sexuality topics in their social sciences classrooms, then they should be doing the same in their science classrooms.

I did a quick survey of the recent biological literature on gender and sexuality. I found numerous examples (from homosexual organisms to gender changing fish) that could be analyzed alongside the science curriculum and used to discuss gender and sexuality. Although outside of the scope for this article, one would just need to pinpoint more topics and develop meaningful ways to incorporate them into the curriculum.

In exploring this topic I have decided that science educators can and should join any school-wide conversations about gender and sexuality. After all, students in all classrooms will have any combination of gender and sexual identities; as such, they deserve every teacher in every classroom to be doing something to make them feel welcome and accepted.

Travis Fuchs
Travis Fuchs is a recent graduate of Harvard’s Graduate School of Education and a Science Teaching Fellow at Lakefield College School in Lakefield, ON.

Reading Music: Children’s Music Books for Inside and Outside the Classroom

Tilly: A Story of Hope and Resilience