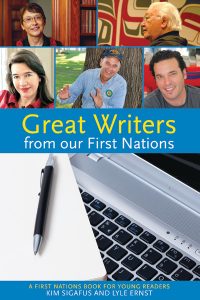 Great Writers from our First Nations—which focuses on ten accomplished indigenous authors from across North America—is the most recent installment of the Second Story Press “First Nation Series for Young Readers.” Included in this volume are some familiar names to Canadians (such as Joseph Boyden, author of Three Day Road, and Thomson Highway, creator of The Rez Sisters) but most readers here, whether young or old, will likely not yet know of Tim Tingle, a Texan storyteller, or Sherman Alexie, a comedian and novelist from Spokane, Washington. These writers and storytellers, several of whom have collected a variety of literary prizes, deserve more widespread recognition from the public at large. Some based on interviews, and others on secondary research alone, the short 8 to 10 page chapters offer biographical sketches of each writer, include black and white photos, and conclude with a list of selected works. Most chapters boast at least one explanatory note on subjects like the Métis, residential schools or the Lewis and Clark expedition. The whole work is prefaced by a useful glossary of terms and there are three pages of associated resources at the end of the book. It should be noted that Lyle Ernst is based in Iowa while Kim Sigafus is from Illinois which may explain why Kamloops BC, where Nicola Campbell grew up, is described as “a large desolate area in central Canada.”

Classroom Connections: The publishers’ website notes that this book is best used for Canadian social studies, character education and language arts. Certainly, school libraries and resource centres on the hunt for indigenous-themed works might consider purchasing it; I suspect its greatest value may accrue to students at the top of the suggested age range. The list of selected works at the end of each biography could be mined for further reading (especially on a variety of controversial topics in award-winning novels) since a good number are directly aimed at a teen-aged readership.

Exceptional Minds across the Autism Spectrum: Pathways to...

Eagle of the Sea