Imagine for a moment what it might be like to teach in a school where class numbers range from thirty to one hundred, class periods are thirty to forty-five minutes, a desk is made of scrap wood at which three students are cramped together. Basic supplies such as pencil and paper are a commodity, teaching amounts to whole days when the only voice heard is the teacher’s, notes are endlessly copied from crude blackboards into donated copy books like the ones used in primary schools over forty years ago. Dirt floors invite worm-like insects called jiggers that eat into the bottom of the children’s shoeless feet, and where openings in walls take the place of windows through which dust freely enters to cover everyone and everything. 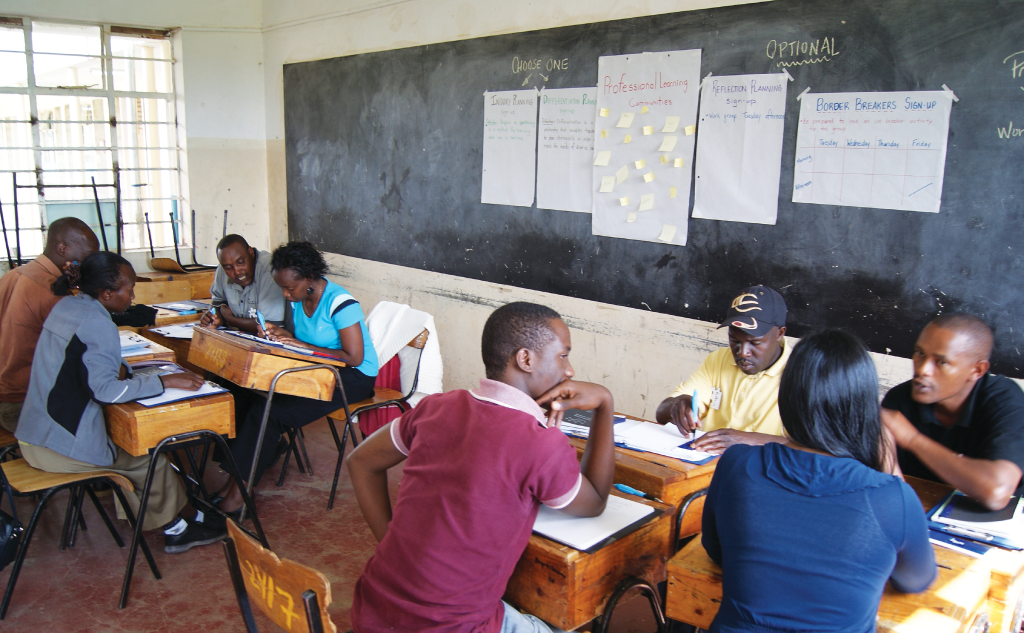 For the past several years I have been fortunate to have worked and volunteered with teachers and youth in developing and/or post-conflict countries in Africa and the Middle East, where classrooms like the one I described above are more a norm than an exception. Twentieth-century educator and scholar John Dewy described education not as a preparation for life but rather education as life itself. While Dewy was not referring to schools in developing and/or post-conflict countries, these schools vividly illustrate Dewey’s description. Schools in these regions are living entities, and I include not just the teachers and students but metaphorically the school itself. Many of these schools literally struggle to survive. Schools in developing countries live and die with the teachers, students, availability of basic materials as well as the environment—in particular, availability of water.

In July and August of 2009 and 2010, eight Canadians, two American teachers and I, all members of Education Beyond Borders (educationbeyondborders.org/) worked alongside approximately one hundred and fifty teachers in two districts of Kenya—Laikipia and Navasha. In each of the districts we provided sessions in Teaching Methodologies, English Language Arts, Math and Science.

Many of the Kenyan teachers who attended the sessions came from distant regions and boarded at the school residences in the area. For the most part they came not because they were ordered to attend, nor because they received a financial bonus or doing so guaranteed their jobs. In fact, some forfeited paying jobs as census takers. They came for the simplest of reasons—they wanted to be better teachers. Even those who recognized from the start that what they would bring back to their school districts had little hope of being implemented, were absorbed in the sessions, day after day. Samuel, one of the Kenyan teachers stated, “Despite the many challenges facing teachers (in Kenya), my passion for the youth, my desire to prepare them for the accomplishment of their goals have kept me in teaching.”

From the very start of our sessions with the Kenyan teachers, we made an effort to dismiss the myth that as teachers from an industrialized country we represented leading experts in our field. While acknowledging that we come from a land of plenty, our aim was to create an environment of collegiality, i.e., to work together as teaching colleagues. Our plan from the beginning is best understood by the adage “give a man a fish, he eats for a day, teach him how to fish and he eats for life.” Our aim was that over four summers the Kenyan teachers would become facilitators and take complete charge of the sessions so that our presence would no longer be necessary. Several of the Kenyan teachers who participated in the first summer sessions in 2008 were chosen as facilitators who worked alongside us designing and co-presenting last summer’s workshops. From what I observed, our approach of developing self-reliance was working.

In many informal discussions with our Kenyan counterparts, I came to realize that the things that make us different are not as significant as the things that make us colleagues. Kenyan teachers struggle with wanting better salaries, as we do. Like many of us, they dream of better teacher-student ratios. They work with little or no resources. And like many of us, complain of never having enough of anything.

I retired in 2012 from teaching secondary school in Canada. However, thanks to my volunteer work over the years, and especially as a result of my experiences over two summers in Kenya with Education Beyond Borders and Project Kenya Sister Schools, a community based NGO, I do not feel like I retired but rather returned to what it means to be a learner and a teacher. In Kenya, perhaps more than in any other developing country in which I have worked, the teachers, through their eloquent words, broad smiles, spontaneous excitement and pride for their profession and culture, helped to clarify for me why I became and remained a teacher for thirty-five years. When Kenyan teachers want to know if their students understand, they say, “Are we all together?” to which I now reply, “Yes we are.”

As of this writing, I am preparing to return to Kenya and continue where I left off. If you would like more information on either Education Beyond Borders or Project Kenya Sister School please contact me at: irving.rother@mail.mcgill.ca

Teaching After Teaching – A Lifetime of Caring

Parenting Type and the Adolescent Student