Can the Bicycle Save the World?

There were 45 of us, brave souls all. Under an optimistic blue sky, we stood with our bicycles on the shores of the Bosporus on the Asian side of Istanbul, posing for the camera, helmets strapped on. The date, August 4, 2007. In 15 minutes, we would embark on what some regarded as an impossible, even a foolish, expedition—a 10,700 km journey that followed the legendary Silk Road. A three and one-half month trek across Asia, ending in front of Beijing’s Forbidden City.

Indeed, it was not the first such epic bicycle journey that I had undertaken. In January 15, 2003, I and 32 other adventurous spirits embarked on the inaugural run of the Tour d’Afrique—from Cairo, Egypt to Cape Town, South Africa in 120 punishing days. 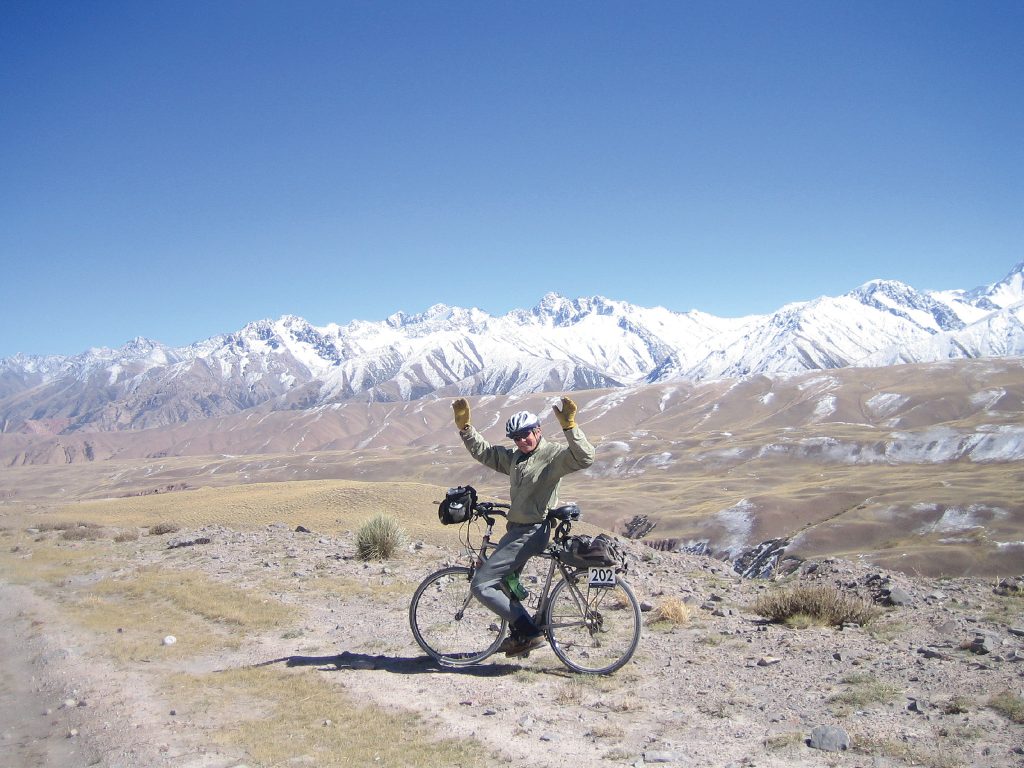 That very first day, in the shadow of the Pyramids, the question I posed to myself was: Can this really be done? Can we cycle every metre—later acronymed and defined as EFI (or Every F…ing Inch)? After all, when we had announced the trip in the media eight months earlier, I was variously accused of being a charlatan, an insane adventurer who was risking peoples’ lives, and a naïve simpleton that obviously “had not spent a day in Africa.”

The group reached the outskirts of Cape Town one hour ahead of schedule.

Two years later, I stood in front of the Eiffel Tower, posing with another group. We were about to embark on a 4,000 km, eight-country tour from Paris to Istanbul, which we ironically called The Orient Express Bicycle Tour. Ironic because it offered anything but the deluxe amenities found on the famous continental train ride. The question I asked myself on that occasion was: Can I make an honest living by running transcontinental tours on a bicycle? The evidence seemed to suggest that I could.

Now, on this fine morning in Istanbul, posing for another camera, I wondered what question I might ponder while crossing the Asian continent. There were many options. The route is rich in architecture, majestic mountains and endless deserts, all suitable for contemplation. It is deep in history, having witnessed the rapacious violence of Genghis Khan’s and Tamerlane’s armies, the Great Game, the precursor of the Cold War, the grand designs of the former Soviet Empire—all rich material to analyze man’s relentless quest for power and violence. Or I could confront more difficult subjects, including personal issues and how to put meaning in my life.

In the end, it was the humble bicycle on which I sat that seemed worth thinking about. Having conquered two continents, I knew that long-distance cycling most closely approximates the ancient hunter-gatherer state of mind. The cyclist, like the hunter-gatherer, must constantly worry about his security, his food, a place to sleep, and how to enjoy the satisfaction that comes with just making it through an arduous day (knowing that the next one will be no less challenging).

The bicycle: cheap, nonpolluting, small and silent. Wikepedia, among others, calls it the most efficient machine ever built by humans, because a person on a bicycle expends less energy than any other creature or machine covering the same distance. Appropriately, I was aimed in the direction of China, a country in which a billion people (give or take a few hundred million) still used the bicycle as their principal means of transportation. And its full potential was still untapped. Somewhere I’d read that entrepreneurial students were designing a small milling device that could be attached to a bicycle: grind your own grain, on the go. Or maybe it was a water filter. Certainly, I’d seen generator-equipped bicycles in museums on which a visitor pedalling at 50 (or less) watts could turn on an incandescent lamp. The only fuel required for all of this: a peanut butter sandwich. 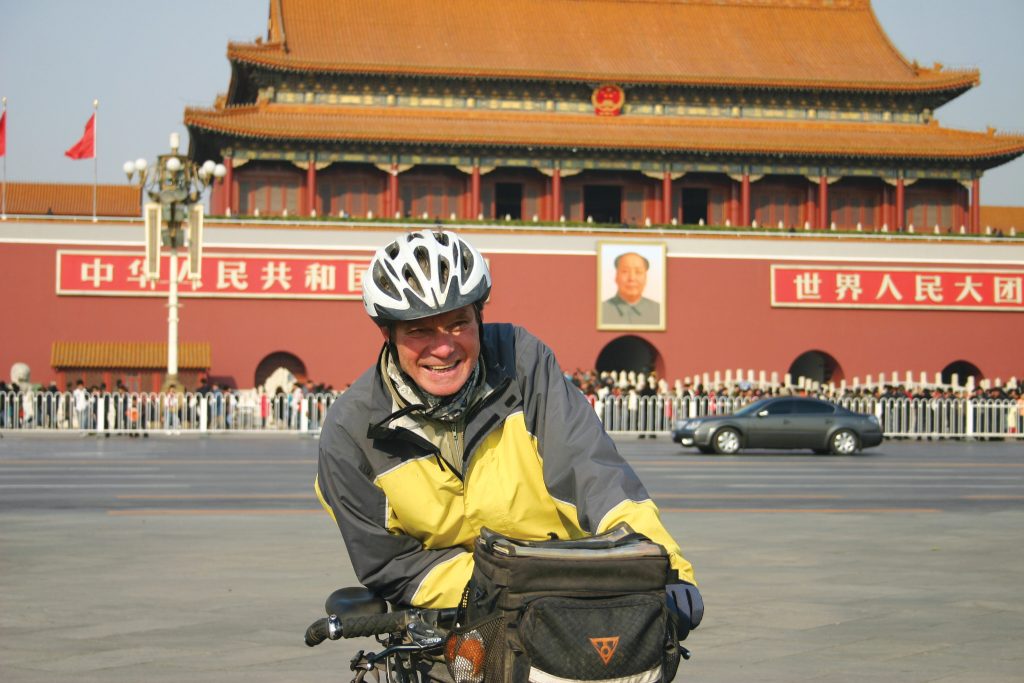 Armed with these stories and memories, my question was readily framed: Can the bicycle save the world? That it needs saving seems unarguable. We all know that we’re headed downhill on a route destructive to nature and thus to life as we know it.

As it turned out, I didn’t have enough time to immerse myself in the depths of such earnest contemplation. I was too busy living, enjoying myself, engaging with drunken Georgians (the former Soviet kind) selling roadside watermelon at 10 am, savouring the beauty of a provincial Chinese city, or choosing a meal by pointing at a number on a menu and hoping—praying—that it would not derive from a former member of an exotic species of which I had never heard.

Of course, it wasn’t an uninterrupted panorama of pleasure. In Turkey, we biked through one of the worst heat waves in its modern history, with temperatures over 45C degrees for several consecutive days. Hot asphalt stuck to my tires. It did not get any better when, in Tbilisi, Georgia, three kilometres from the hotel in which we were due to take a much-deserved rest, a mad taxi driver hit one of my cycling companions. She flew like a missile, landing in front of me. The driver, shameless, promptly backed up his car and drove away before I had time to dismount. No doubt he descended from Genghis Khan. The rider, fortunately, was not seriously hurt.

At the border with Azerbaijan, we were met, not only by a delegation from the Ministry of Tourism, but by an eight-piece orchestra, traditional dancers and the entire Azerbaijani junior cycling team. Azerbaijan, of course, is a Muslim country, but in every restaurant we received three glasses, for water, wine and vodka respectively. And this was for breakfast.

Turkmenistan spoke to my heart. I’d grown up under the shadow of a totalitarian regime (Communist Czechoslovakia), so riding in the desert with a continuous police escort felt like the good old days. It did not take me long to readopt the behaviour necessary to live and thrive in such societies, to stretch the limits of what is forbidden and at the same time avoid trouble.

At one point, a police officer ordered me into his car. I smiled and politely declined his request, and offered to buy him and his colleagues cokes and ice cream. That sealed our newfound friendship.

Across the Turkmeni desert into the next Stan—Uzbekistan. No deserts, no mountains and, luckily, no stifling heat. A day’s ride from the border we reached the legendary city of Bukhara (the name means monastery in Sanskrit), a glorious sight. We toured the earthen Ark Fortress, home to the rulers of Bukhara for more than a millennium; the Registan, a verdant Square at its foot; and the Kalon Minaret, the tower of death, so-called because of the many victims hurled from its heights. A traditional proverb says that the Samarkand is the beauty of the Earth, but Bukhara is the beauty of the spirit. But some of that spirit was also pure evil. On the eve of the 20th century, the Emir of Bukhara enjoyed poking out the eyes of his dissident subjects.

We arrived in Tajikistan to find a country still trying to recover from a recent civil war. Some 60% of Tajiks live in abject poverty and the minimum wage is $1 a month. Nowhere is the spirit of Stalin more visible than the zigzag borders of Tajikistan, drawn by the young Georgian commissar in 1924 on the well-known principle of divide and rule. The country is 65% Tajik, an Ethno-linguistic group different than the Turkic people that surround them. And there are more Tajiks living in exile in the surrounding countries than in Tajikistan. Still, it’s a stunning place, where the altitude rarely dips below 3,000 metres.

In Kyrgyzstan, after day of rest in Osh, we embarked on a serious climb to Taldyk pass—to 3,700 metres. Let me tell you, at that oxygen-deprived elevation, you’re not thinking about saving the world. You’re thinking about saving yourself, if you’re able to think at all. But the ride downhill, through the mountain pass into China, was exhilarating. 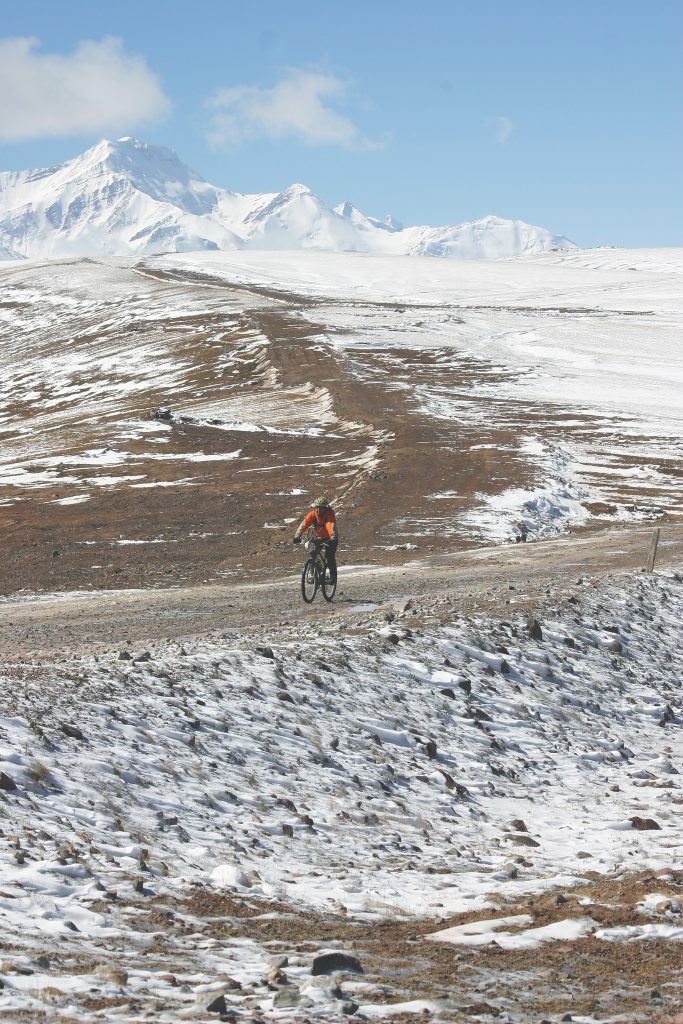 The former “kingdom of bicycles,” of course, is no more. Now, China is the El Dorado to every car manufacturer in the world. Here, at last, there was time for sober contemplation. You may ask: How can you think with 1.3 billion people around you? But in fact, the vast majority of Chinese live in the east. Large portions of the West are, like Canada’s north, virtually uninhabited.

Still, modern China and the frenetic pace of change hits you everywhere. New highway construction crisscrosses the Taklamakan desert—a Uiger word meaning “enter but do not come out.” Huge apartment buildings sprout like mushrooms after a good rain. Small Chinese cities are home to millions. China is on the move. And so are the Chinese. Their entrepreneurial energy, suppressed in the decades following the Communist revolution in 1948, has now been released, and is flowing faster than a newly opened dam.

So can the bicycle save the world? Of course it can. Imagine every city with boulevards filled with bicycles, pedestrians, streetcars and parks where children could be children again. Is that so hard to imagine? After all, in Copenhagen 36% of all trips are by bikes (only 27% by car). By 2015, only seven years from now, they aim to be at 50%. It’s in our urban centres that the transformation must occur; half of the world’s population now lives in cities. That’s more than three billion plus breathing—or should it be wheezing?—souls.

What if we persuaded Bill Gates or Warren Buffett or George Soros to put up $10 million for the best new human-powered vehicle? Think of the human health benefits, the reduction of demand for our fast depleting fossil fuels. Just as the X prize created space tourism, so this prize would engender all sorts of new human-powered inventions. But we need to act. And as I biked mile after mile in today’s China, I remembered something I’d learned to my regret as a relief worker in Africa. We human beings tend not to respond until disaster hits.

Do You Remember Me?