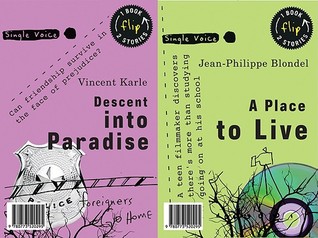 A Place to Live

In this volume, two stories are presented in a flip-book format. Each novella has a single narrator, hence the name “Single Voice Series.” The stories are linked thematically and deal with profound moments in an adolescent’s life in which he is required to have the courage to take a stand.

In A Place to Live, the narrator, a sixteen-year-old boy, remains nameless throughout the story. With a new principal in his school, there are new rules to follow. The principal believes that school is a place for “hard work, discipline, and consequences.” The students seem to acquiesce so the narrator decides to rebel on his own. With his camcorder he begins to film people at school kissing. This is done with their permission, and once the students catch on to why he is doing the filming the narrator has no lack of volunteers. The filming soon turns into a project about life at school in all its forms: kissing, fighting, laughter, friendship and tranquil moments. There are consequences when the principal finds out, but they mean little to the narrator. During the process he has discovered something important about himself. As he waits in the principal’s office he looks out the window to the courtyard below and realizes that standing up for what he believes was the right thing to do, and that he is not alone.

On the flip side is Martin Leduc, who likes to takes pictures, and likes to smoke dope. Who he doesn’t like is the new student, Zaher Arash, from Afghanistan, but after a rocky start they become good friends. While living in Afghanistan, Zaher’s grandfather was killed by the Taliban. Zaher’s father wrote articles against the Taliban, and for that his office was burned down. The family had to flee and finally managed to escape. One day, at Martin’s school, the police suddenly barge into Martin’s class. This brings back horrible memories for Zaher. Martin and Zaher are arrested on drug charges, even though they find nothing on Zaher. Both boys are treated with extreme force and brutality by some of the officers. Considering Martin’s father is the Chief of Police, one wonders at the choice of action by these officers. Martin’s camera has been confiscated but he mentally “clicks” pictures of everything that is happening to Zaher and himself. The whole episode is a cover-up for something even more frightening. While the consequences for Martin are bad, they are devastating for Zaher and his family. Martin does his best to stand up for his friend, but doing the right thing doesn’t always get the desired results.

Canada 13 Special: Climb on Board! 13 Tales for Canadian Kids

Teaching Art: A Complete Guide for the Classroom

Unspoken: A Story from the Underground Railroad

Technology in the Classroom: Enhancing the School Experience...