When you enter the room, you immediately notice something is different. Children are riding unicycles, jugglers are juggling and flippers are flipping. What’s going on? Has the Cirque de Soleil moved their training facility to Merton Elementary? No, but the circus is definitely in town. 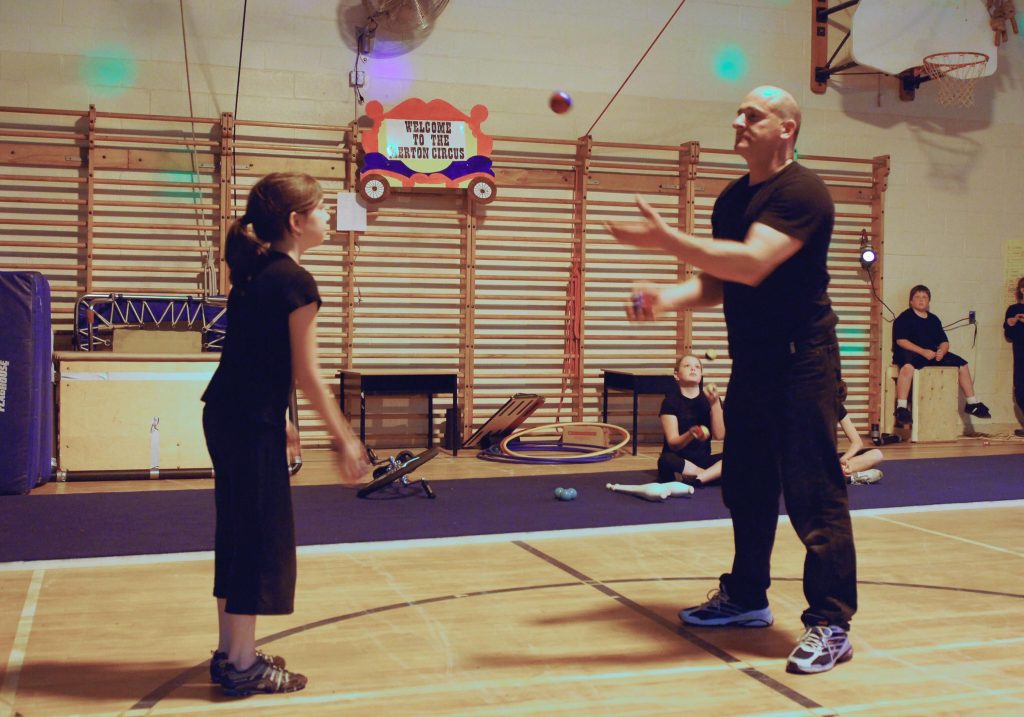 The ringleader of this circus is Molo Finelli. Molo (as his colleagues call him) was a member of the Canadian Trampoline team that represented Canada at two world championships. He has been teaching physical education for twenty-one years, the last six with Merton Elementary in Montreal. When he came to the school he decided to add some non-traditional circus activities to his gym classes. The kids loved it. At the suggestion of school principal, Raziel Candib, Molo pulled together an “end-of-year” performance. With the children’s enthusiasm and spirit, and Molo’s support, the show was a great success…. and it’s been going strong ever since.

“The look on the children’s faces as they perform is incredible,” Candib says. “You can see the confidence that Molo develops in each one of these children. It will be something they never forget.”

Molo was drawn to Merton because of its intimate environment. With a population of 250, the teachers not only know all the children’s names, they know their personalities, their strong points and their weak points. This is where Molo is at his best.

“Mr. Molo makes everyone feel like a friend,” says Ileana, a Merton graduate. “He pays attention to everyone. He talks to you at your level and whatever you try, you know he is gong to support you.” Allycia, a grade six student, says, “He works WITH you. He doesn’t tell you where the finish line is. He just keeps supporting you until you find it yourself.”

When it comes to a personal teaching philosophy, Molo believes that every child has talent. He believes that the job of parents and teachers is to help them find it and give them the confidence to develop it. His philosophy clearly shows up in his classes. All kids, no matter their size or shape, look forward to gym class. “There is always something new,” says Chynna, a grade five student. One day we could be playing soccer; the next Mr. Molo could be playing a guitar while we warmed up for the class, and the next we could be flipping and flying on a spring board. Mr. Molo always makes it fun for everyone.”

There is more to this man than the circus.

Last September, Molo was rewarded for his hard work and dedication by being one of just five winners of the Heritage Education Foundation’s National Excellence Award for Teachers. The award is given to teachers who introduce innovative teaching strategies to their classrooms and, in doing so, have widened the horizons of their students.

When informed that he had won the award, he was both surprised (he didn’t know the principal had nominated him) and humbled. “I’m here for the kids,” he says. He was also quick to applaud his fellow teachers. “A school is only as good as its teachers and I applaud my colleagues for their innovation and dedication.”

Their efforts are paying off. In the past few years, two other teachers have won the Prime Minister’s Award for Teaching Excellence. The robotics program has also won several awards at provincial competitions.

Molo makes it a point to include students who he knows may be struggling academically or socially, or who may be just shy. “Students need to be motivated,” he says. “If they look forward to my class, if they have fun in my class, then they will feel good about coming to school and giving the effort that some of the more difficult subjects may require.”

In a world where too much emphasis is put on winning and losing, and the education system forces teachers to pass or fail a student, Molo does his best to reward effort. “You don’t need to be Wayne Gretzky or Tiger Woods to be a winner,” he says. “All you have to do is try. It’s the effort that needs to be applauded because it’s the applause that builds confidence.”

The school day for Molo does not end when the bell rings. He is an active member of the school’s Governing Board where he contributes to the development of Merton’s policies and activities. Every Halloween, Molo’s gymnasium is converted into a haunted house complete with ghostly howls, graveyard spooks and a host of volunteers who jump out of the darkness to scare the students. He and fellow teacher Bernard Cyr are members of a band that have entertained both children and parents on more than one occasion.

An outsider may not understand what makes Molo tick, but his fellow teachers, volunteer parents and a school full of kids know that this is how the world should be according to the Ringmaster in the successful run of Mr. Molo’s Circus.

Harvey Caron
Harvey Caron is the parent of two children who attend Merton Elementary School in Montreal, Quebec. He is a member of the Home & School and Governing Board.

God Save the Queen

Into the Malaysian Jungle