What is Intergenerational Day?

The purpose of Intergenerational Day is to find various ways to bridge the gap between generations.

What is the history of Intergenerational Day?

Sharon MacKenzie, a teacher in Vernon, BC, had spent many years finding different ways to connect her students to older generations within their community. In 2008 she retired from the classroom to found the i2i Intergenerational Society of Canada. The goal of this nonprofit group is to assist others with similar projects across the country.

The i2i Intergenerational Society, along with some school groups in Newfoundland, British Columbia, Manitoba, Quebec, and Ontario, initiated the first Intergenerational Day in 2010. Since that time, the day has been celebrated annually across the country.

A wealth of information, resources, and activity ideas for Intergenerational Day projects (lasting from five minutes to several hours) are available on the society’s website: intergenerational.ca

In the year 2000, Sharon MacKenzie found herself looking for a way to connect school-aged children to older adults in a sustained and meaningful way. She approached the owner of an Assisted Living Facility, and from that discussion grew the Meadows School Project.

A classroom was established in the seniors’ residence and students were bussed there for a full day of classes for five weeks in the fall and three weeks in the spring. The students also made several visits to the residence during the winter months. The classroom timetable was designed to fit the calendar of the residents who chose to participate in the project. This structure facilitated the following:
• the academic and social goals of the students (with the content often adapted to include interaction with the seniors)
• ninety minutes of public service by each student, each week (helping with chores at the facility)
• daily opportunities for individual or small group interactions between students and seniors

The physical, mental, and social benefits of the Meadows School Project are recognized and well documented. The project has now been replicated in several other school districts.

For a full description of the project, visit the website: intergenerational.ca

A ten-minute Youtube video called Whose Grandma Are You? filmed by Jim Elderton gives an excellent summary of the project. It is narrated by Sharon Mackenzie, students, elders, and staff at the Assisted Living Facility.

These three picture books explore interactions between children and their grandparents. Each is a story well told and beautifully illustrated in a variety of media. They all lend themselves to the following reading strategies: making connections, inferring, asking questions, and visualizing. 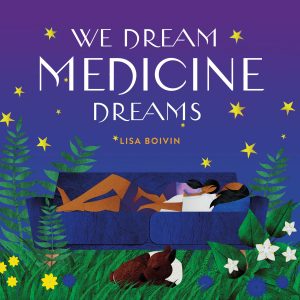 We Dream Medicine Dreams by Dene artist and bioethicist Lisa Boivin is a truly wonderful example of storytelling through powerful images and commanding text.

The story describes the relationship between a young girl and her grandfather as he explains how to connect to the knowledge of her ancestors through dreams. Bear, hawk, caribou, and wolf all have information to share, and when her grandfather falls ill, the young girl turns to their teachings to learn how to say goodbye.

This gentle look at death and loss is appropriate for young children from K to 3 but could easily be used with older students. 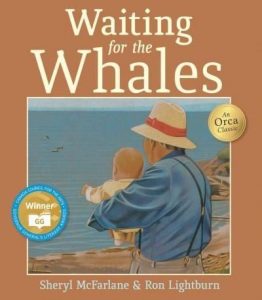 Waiting for the Whales

The storytelling skills of both the author and the illustrator have stood the test of time in this exquisitely-executed book. Originally published in 1991, Waiting for the Whales is an award-winning picture book that became an integral part of the literature-based themes that I planned for my own classroom.

The story examines the growing bond between an elderly man and his baby granddaughter after she and her mother come to live with him. Over the years he shares his knowledge of gardening, the forest, and the beaches surrounding their home. Most of all, he shares his passion for the orca that swim in front of the cottage each year. When her grandfather dies, the young girl keeps watch over the strait and waits for the whales to return.

This delightful book is accessible to independent readers (Grades 3 and 4) and makes a great read-aloud for younger students. 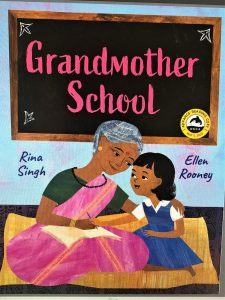 Grandmother School, winner of the 2021 Christie Harris Illustrated Children’s Literature Prize, chronicles the story of Aajibaichi Shala—the Grandmother School. This one-room school was built by a local schoolteacher, Yogendra Bangar, in the remote village of Phangane, India. The school opened to Phangane’s 29 grandmothers—who had never had the chance to go to school—in 2016. At that time the students ranged in age from 60 to 90 years of age.

The story of one grandmother is told through colourful mixed-media illustrations and through the voice of her young granddaughter in the text. As the granddaughter describes the excitement of walking hand-in-hand to school together in the morning, visiting the market, and engaging in many daily activities, the strong bond between the two is evident.

Within a year the grandmother learned the alphabet and could read and write many words. The day that she could sign her name at the bank was a cause for celebration!

This story of courage and determination is appropriate for independent readers (Grade 2 to 4) and would make a great read-aloud for all ages.

Brenda Boreham
Brenda has 35 years of classroom experience. She has presented workshops on literacy strategies and has written a number of resources for teachers. She remains passionate about matching up kids with books.

This article is featured in the Fall 2022 issue of Canadian Teacher Magazine.

The Case for a Lateral Reading Approach to Online Source Evaluation