Palaeontology, geology, geography, meteorology, environmental issues, ecosystems and biomes are just a few of the fascinating topics encompassed by the field of Earth Science. These topics thread their way through school curricula at every grade level and provide teachers with many possibilities for building classroom units of study. The following background information and list of resources might be helpful when integrating the learning standards from each subject area to create a literature-based theme around ecosystems and biomes.

Ecosystems can be defined as the interactions between living and non-living things in a specific place. The energy that flows through an ecosystem by means of these interactions comes primarily from the sun through photosynthesis. Ecosystems can be tiny (a puddle, a tree stump, etc.) or large (a mountain range, a lake, etc.).

Ecosystem: The Canadian Encyclopedia. The Canadian Encyclopedia is a free, bilingual resource published by Historica Canada in Toronto. This online encyclopedia contains more than 19,000 articles and a variety of programs, as well as a number of educational resources for teachers and students. The extensive and detailed article on ecosystems is an excellent resource for teachers and senior students. thecanadianencyclopedia.ca/en/article/ecosystem

Nature Detectives in the Forest by Diane Swanson, published by Pacific Edge Publishing. This is one in a series of books that introduces young readers to various ecosystems. This title shows how living and non-living things interact in a forest environment. The book also presents examples of forest fossils, Indigenous connections to forest ecosystems and the ways that people help and harm forests. Other titles in the series explore rivers, seashores, grasslands and wetlands. pacificedgepublishing.com 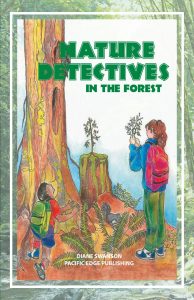 Coast Salish, Coastal Rainforests and Cougars by Celestine Aleck, Brenda Boreham and Terri Mack, published by Strong Nations Publishing, 2017. This book is one in a series of ten titles published by Strong Nations. The series explores the connections between the living and non-living parts in several distinct ecosystems. In Coast Salish, Coastal Rainforest and Cougars the reader will discover some of the ways that a Coast Salish community interacts with its traditional land, the diversity of a coastal rainforest, and a close look at the life of a shy and mysterious cat. strongnations.com Sto:lo, Riparian Forests and Black Bears by Rod Peters, Brenda Boreham and Terri Mack, published by Strong Nations Publishing, 2017. This title takes a close look at the many connections within a riparian forest ecosystem. Rod Peters shares some of the ways that the Sto:lo people interact with their traditional land, and the reader learns many fascinating facts about the black bear. strongnations.com

Biomes are described as very large areas of the earth’s surface (usually found in bands of latitude around the planet) defined by their climate and the community of plants and animals that live there. Every part of the earth’s surface, terrestrial and aquatic, is part of a biome. The five major types of biomes are desert, forest, grassland, tundra and aquatic (salt and freshwater). Each biome is made up of a large number of ecosystems with similar characteristics. Forest, grassland, tundra and aquatic biomes are found in Canada.

The World’s Biomes. This website provides detailed information about the five major types of biomes: aquatic, desert, forest, grassland and tundra. The characteristics of each biome are described and the importance of conserving, and maintaining, healthy biomes is emphasized. ucmp.berkeley.edu

Forests are large areas of land where the vegetation is predominantly trees. Scientists classify forest biomes into subgroups according to their latitude (tropical, temperate, boreal). Each type of forest supports a community of plants and animals that is suited to that particular climate and soil type. Forests cover 3.5 million square kilometres (60%) of Canada’s landscape.

National Forest Week: September 18 to 24, 2018. This annual week of public awareness was originally established in the 1920s and was formerly known as Forest Fire Prevention Week. www.cif-ifc.org/national-forest-week/

National Tree Day: September 26, 2018. This is an annual day of celebration for all Canadians, to appreciate the benefits that trees provide (cultural, social, ecological, economic, etc.). treecanada.ca/engagement-research/national-tree-day/

Grasslands are open tracts of land where the main type of vegetation consists of grasses and wildflowers. A major loss of native grasslands has occurred in Canada due to agriculture, forest encroachment, cattle grazing, and the invasion of non-native plants. Losses include 97% of the tall grasses in southern Ontario, 70% of prairie grasslands and 19% of the bunchgrass and sagebrush in British Columbia.

A Day with Yayah by Nicola Campbell, illustrated by Julie Flett, published by Tradewind Books, 2017. The story told in this picture book takes place in the Nicola Valley, which is located in the grasslands of the southern interior of British Columbia. A First Nations family spends the day together gathering edible plants. With the guidance of their grandmother, Yayah, the grandchildren learn to distinguish the plants that are traditional food sources. tradewindbooks.com

I Wait by Caitlin Nicholson, translated by Leona Morin-Nelson, published by Groundwood Books, 2017. Written in Cree and English, this beautifully illustrated book tells the story of a young girl, her mother and her grandmother going out to pick wild yarrow. The book is set in the grasslands of northern British Columbia, near Prince George. It includes a recipe for yarrow tea. groundwoodbooks.com 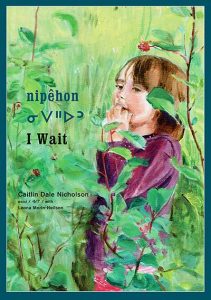 Canada’s Grasslands. This video posted on YouTube by Hinterland’s Who’s Who is a one minute introduction to Canada’s grasslands and the amazing diversity of plant and animal species to be found there. youtube.com/watch?v=ikWzJ2rGxiM

The tundra is vast, treeless land covering large areas in the far North, including Nunavut, the Yukon, the Northwest Territories, Northeastern Manitoba, Northern Ontario, Northern Quebec and Northern Labrador in Canada. A number of animals and low growing plants with small leaves and short root systems have adapted to living in the cold, harsh climate of the tundra biome.

Hinterland’s Who’s Who: Canada’s Arctic Tundra. This extensive website provides the description and location of the Arctic tundra as well as lists of plants and animals that live there. Videos and links to other resources and websites are included. hww.ca/en/wild-spaces/arctic-tundra.html

The Polar Bear by William Flaherty, illustrated by Danny Christopher, published by Inhabit Media in 2016. William Flaherty is a conservation officer who lives in Iqaluit, Nunavut. In this clearly written and fact-filled book, he shares information about this iconic Arctic animal. Supported by the finely detailed illustrations, young readers will learn about the life of the Polar bear on the tundra, on the sea ice and in the open water. inhabitmedia.com 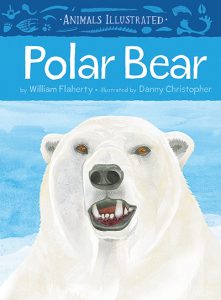 Sukaq and the Raven by Roy Goose and Kerry McCluskey, illustrated by Soyeon Kim, published by Inhabit Media, 2017. This traditional Inuit creation legend is beautifully illustrated with a combination of drawing, painting and collage techniques. Sukaq and the Raven would make a great read aloud and could be an inspiration for many classroom art projects. inhabitmedia.com 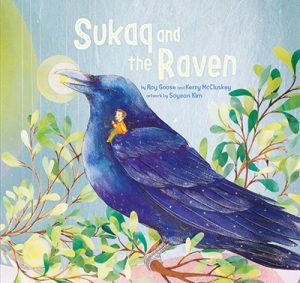 The website for Ocean Wise, a not-for-profit conservation organization developed out of the Vancouver Aquarium Marine Science Centre, has a number of programs available to assist teachers and students to develop ocean literacy. These resources include mobile programs, curriculum programs (elementary, middle school and high school), and online programs. As well, each Thursday, a new themed story is uploaded to the website. Each one features short YouTube videos, articles, interviews and tips from science experts and hosts.  ocean.org

The Northwest Aquatic and Marine Educators (NAME) was founded in 1976 and became part of the National Marine Educators Association in 1980. NAME consists of members from Oregon, Washington, British Columbia and Alaska. This organization offers workshops, field experiences and conferences in the Pacific Northwest. It also shares background information and educational materials on aquatic environments and issues. pacname.org

Waiting for the Whales by Sheryl McFarlane, illustrated by Ron Lightburn, published by Orca Book Publishers. This award-winning picture book has become a classic in the twenty-five years since it was originally published. Set on the West Coast of British Columbia, it tells the story of the unique relationship between an old man and his granddaughter. The grandfather shares his knowledge of the natural world with the little girl and together they await the arrival of the pods of orca each spring. I have used this book many times as a read aloud to accompany classroom themes and projects and would highly recommend it. orcabook.com

A teacher’s guide for Waiting for the Whales is available from pacificedgepublishing.com. 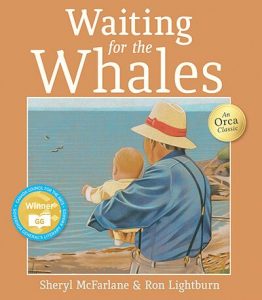 Goal: To introduce primary school students to the concept of Canadian biomes. 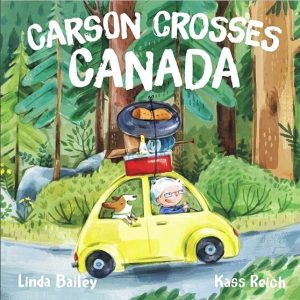 Synopsis: Carson the dog and his friend Annie Magruder travel from Tofino, on Vancouver Island, to visit Annie’s sister in Newfoundland. They camp along the way and experience many diverse geographical regions. A route map is provided.

Step 1: Read the book to the class. Track the journey on the route map.

Step 2: Return to a few of the pages that contain illustrations of water bodies (ocean, lake, waterfall). Have the students examine each picture in detail. Brainstorm a list of things that can be seen in the pictures. Record the list on chart paper or the chalkboard. Consider what sounds might be heard in the pictures and add those words to the list.

Step 3: Return to the page with the picture of the prairies. Repeat the above process.

Step 4: Provide each student with the following word list. Each word, or set of words, is printed inside a box: Pacific Ocean, grasshopper, salt air, flat, lake, big sky, waterfall, grain, Atlantic Ocean. Have the students cut out the word boxes and sort the words into two groups on their desk tops.

Step 5: Have the students share their word sorts with a partner. Ask them to justify their sorts by explaining the rule they used for sorting the words.

Step 6: Introduce the terms “grassland” and “aquatic.” Make sure that the students understand what the words mean before asking them to re-sort the words under these two headings.

Step 7: Have each student share their second word sort with a partner. Have them explain whether this sort is the same or different from their original sort, and why.

Step 8: Explain to the class that one way that scientists think about Canada’s landscape is by looking at the climate, the soil and the living things that thrive in different large areas. The animals and plants that live in each area are adapted to the unique conditions of the area. These large areas are called biomes. Grasslands are one kind of biome. Bodies of fresh and salt water are aquatic biomes. Forests and the tundra are also biomes.

This article is from Canadian Teacher Magazine’s Spring 2018 issue.

Fostering an Inclusive Climate in an Alternative School