The Life Aquatic: The Adventure of Bringing Your Passions Into the Classroom

I’m a Grade 6 teacher and I’m also an avid scuba diver. The classroom and the open water have always been two very separate aspects of my life. Don’t get me wrong, I always share a few stories and pictures, but that’s the closest the two worlds have ever come to merging. Last year I decided to bring a bit more of my passion into the classroom, and nothing could have prepared me for the journey my class and I embarked on.

It started last August, when I came across an article about Fabien Cousteau’s plan to spend thirty-one days living in an undersea laboratory. The part that intrigued me most was that he would be connecting with classrooms through Skype. I resolved then and there that my class would be one of them. A quick message to his PR representative pointed me in the direction of Skype in the Classroom. It seemed like an interesting use of technology, but I wasn’t thinking much past a one-time connection.

A little exploration on the site led me to give Mystery Skype a try. It’s a game where two classrooms from somewhere in the world connect and race to identify the other classroom’s location through a series of yes or no questions. Students can be given various tasks like greeters, recorders, questioners and mappers. Over the course of the year we connected with classrooms in Sweden, France, Uganda, El Salvador and Alderney, to name a few. We even participated in a televised Mystery Skype with a classroom from Connecticut.

The month of November was dedicated to Exploring Oceans through Skype in the Classroom. A series of guest speakers from around the world was arranged, and teachers could sign up for them. I leapt at the opportunity and we learned about a wide range of ocean issues from underwater photographers and videographers, shark researchers, Arctic scientists, ocean rowers, deep-sea submersible operators, free divers, conservationists and aquarium educators. We covered issues like plastics in the oceans, biodiversity, global warming, fieldwork and frontiers of ocean exploration. It’s hard to top learning from some of the foremost experts in the world. My student’s questioning skills grew by leaps and bounds as the year progressed. I couldn’t resist getting in on the action and created my own lessons that were added to the Exploring Oceans portfolio. I taught about scuba diving and ocean issues in classrooms on four continents.

The month of November was such a hit in my classroom that we embarked on a mission to connect with fifty scientists, explorers and conservationists. Joining an expedition on an active volcano in Italy, hanging out in an Adele Penguin colony in Antarctica and taking a virtual deep-sea dive on submersible in Roatan barely scratch the surface of our fifty-two connections. Our quest culminated in the most perfect manor with our 50th connection, Fabien Cousteau from the bottom of the ocean, the man who inspired our journey in the first place.

An early connection with marine biologist Jillian Morris spawned a shark conservation movement in my classroom. She is also the founder of a not-for-profit group called Sharks4Kids based out of the Bahamas. After speaking with her and learning about the plight of sharks, my students decided to write letters to the Prime Minister, asking for a ban on shark fin products in Canada. At the same time we learned about a proposed shark cull in Western Australia. We decided to write an open letter to the Premier of Western Australia voicing out concerns. Upon hearing back from him, we weren’t satisfied with his response so we wrote again. We made local and international headlines, created a video for the conservation group Sea Shepherd and even did a radio interview in Perth. My students definitely learned that their voices could be heard if they were passionate about an issue.

Our activities attracted the attention of Canadian world record holding free diver William Winram and his conservation group the Watermen Project. He uses his unique breath holding skills to tag great white and hammerhead sharks in open water, without the use of protective gear. While taking a break from tagging sharks in the Bahamas and with the sponsorship of the Canadian Wildlife Federation, he was spending a week touring schools in Ontario. A stop at our school was added to the itinerary and what followed was an amazing afternoon for our entire student body. 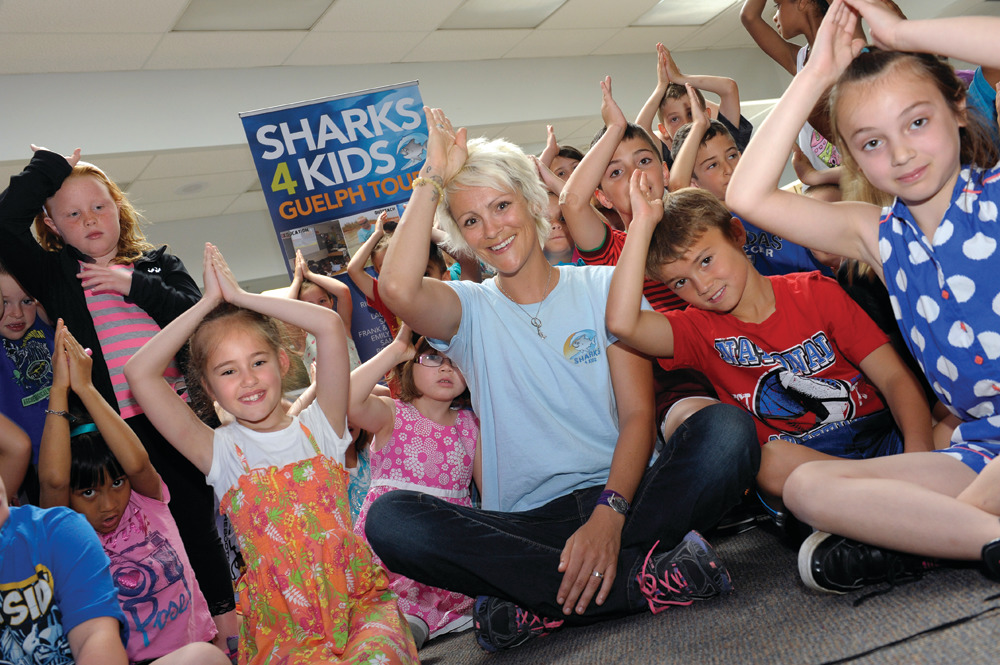 Throughout the school year, I kept in touch with Jillian and we mused about the prospect of bringing this type of education to the whole school board. When I thought about what we had already accomplished, this idea didn’t seem out of reach. The Sharks4Kids Guelph Tour was born! With assistance from the school board, crowd funding from around the world and generosity from local businesses, we brought Jillian, Duncan and Derek from the Bahamas and Florida to Canada. Duncan has travelled the world filming sharks for the likes of BBC, Discovery and National Geographic and Derek is a researcher, tagging and tracking sharks to learn where they spend their time in the ocean. In a week we visited 20 elementary and high schools, reaching over 5,000 students, putting on interactive presentations geared to the different grade levels.

Looking back, the impact of the simple act of bringing my passion for diving, science and the natural world into my classroom was truly amazing. It makes sense though, when you are excited and enjoying what you do, it can’t help but rub off on your students. Technology in the classroom really does tear down walls and can allow your students to leave their digital footprints all over the world. Our learning spilled out of the classroom to our whole school and eventually every school in our board. This year, with a move to Grade 8 science and math, armed with a $5,000 technology grant to continue the program and a list of contacts from around the world, I can’t begin to imagine what my students and I will get up to both in and out of the classroom.

Joe Grabowksi
Joe Grabowski teaches grade 8 Science and Math at St. John Catholic School in Guelph, Ontario, Canada. He believes students should experience hands on learning and have opportunities to make their own discoveries.

This article is from Canadian Teacher Magazine’s Sept/Oct 2014 issue.

Media Literacy Starts with the News

Strategy Training: For ESL Students and All Language Learners

Rousing Curiosity in Math with a 125 Year...