The heroine of the 1950 novel, A Town Like Alice, longs to make her fictional town in the Australian outback into a place like booming A lice Springs. This book, and the 1980s television mini-series that followed, made me wonder what it was that attracted people to the geographic centre of Australia in the desolate outback. I needed to find out. 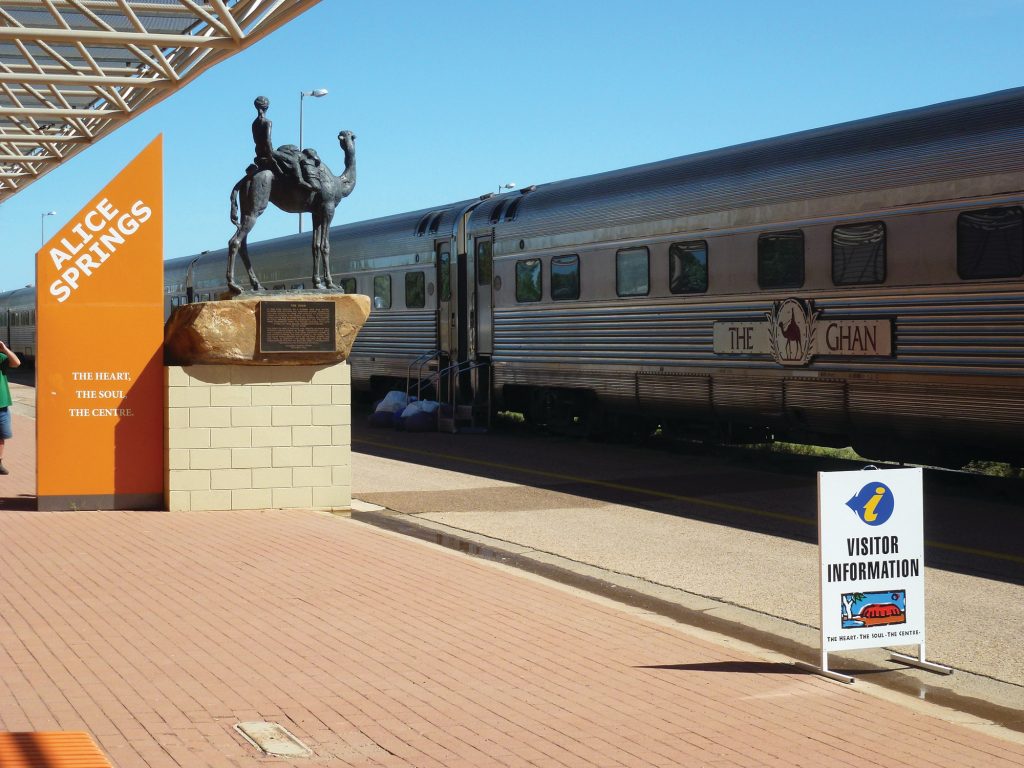 The Ghan waiting to depart the Alice Springs station

I came to Alice Springs—or Alice, as it is fondly referred to—at the end of a tour of the Red Centre, described in a previous article in the Nov/Dec 2012 issue of Canadian Teacher Magazine. The town was naturally a contrast to my travel through the desert, but I was surprised at just how much the little town had to offer.

With a population of over 27,000, Alice Springs is midway between Adelaide in the south and Darwin in the north. It was settled by the British in 1871 as a repeater station for the Overland Telegraph Line, and helped to complete a communications system that linked Adelaide with Britain. Built just a short distance from the original Alice’s Spring (named for the wife of the Postmaster General, Charles Todd), its structures and furniture were modest, due in part to the fact that everything had to be brought by camel 500 kilometres from the end of the railway line at Oodnatta in South Australia. 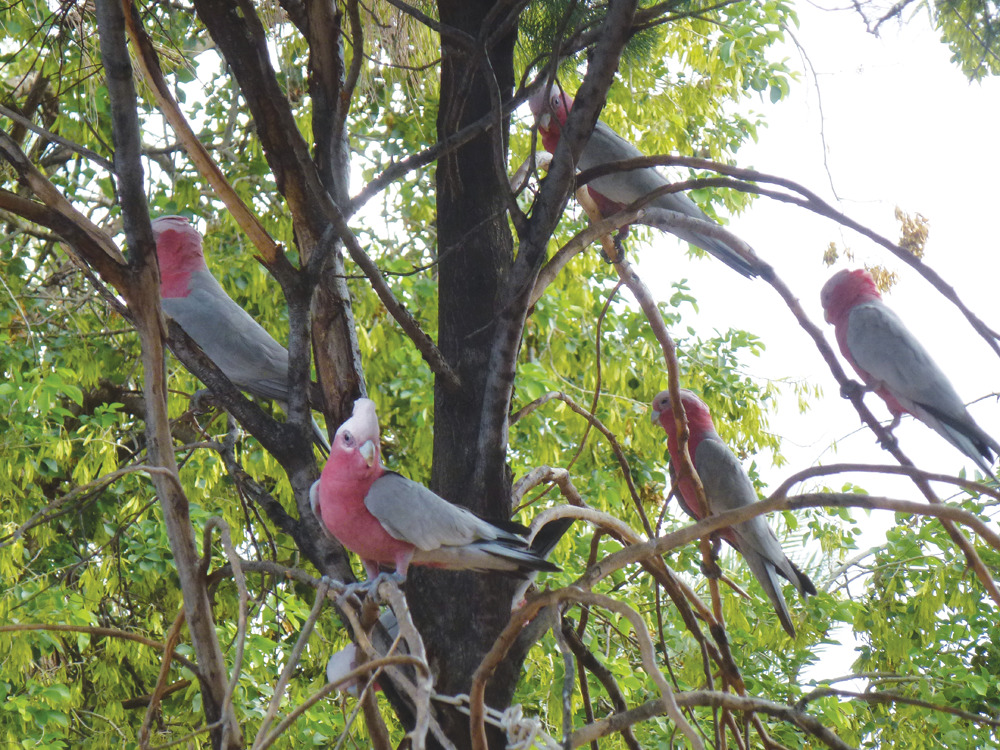 A town grew up around the telegraph station, boosted by the completion of the railway from Adelaide in 1929 and the construction of a siding for stockyards to ship livestock to market. The gold rush in the nearby East MacDonnell Range in the 1930s added to its importance, and when the new railway was extended to Darwin in 2004 Alice Springs became an even more important hub. 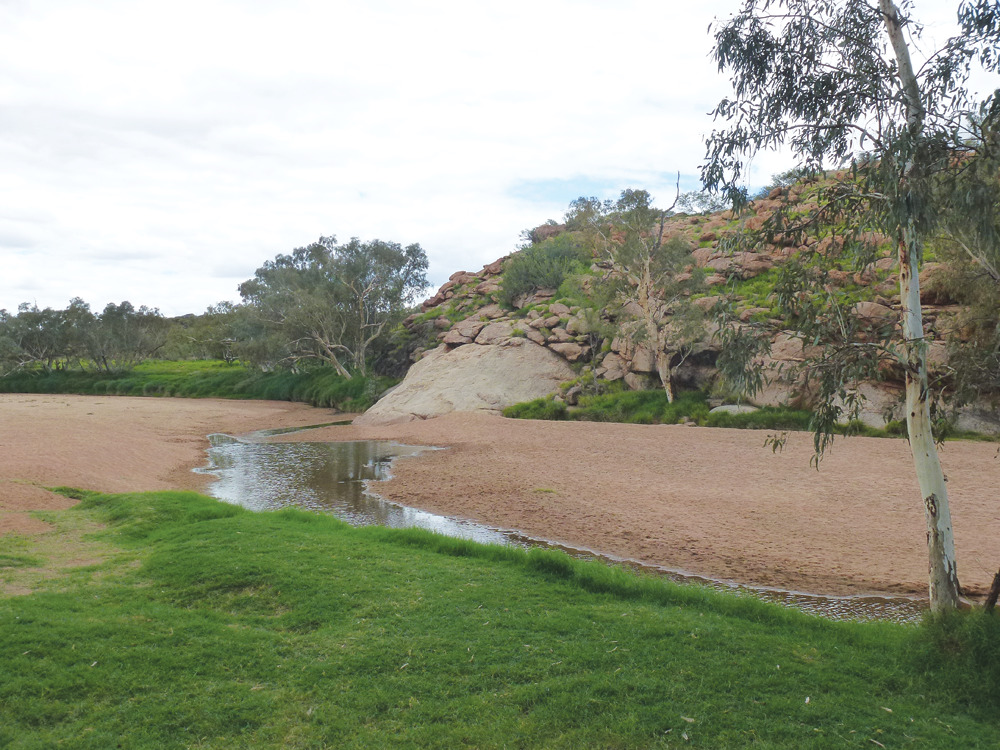 Over the years, the people who built and depended on Alice Springs were rugged, independent people like railway workers, ranchers and miners. I was interested, then, to find the wide variety of tourist sites in the area. It was no surprise to find the transportation museum that shows the development and history of road and rail travel, the historic site of the original telegraph station that gave the town its start, or the museum that preserves the old gaol, the first permanent stone building in the town. It was not unusual to find the world-class Alice Springs Golf Club and the Alice Springs Turf Club in a moneyed town of this size, or the outback-themed restaurants and venues that cater to tourists.

What did surprise me was the way that the town’s history, culture and natural environment are represented out of all proportion to the size of the town. And I don’t mean that the town has been made into a theme park. What I found was that the people of Alice Springs have embraced their identity and expressed it proudly in all its various forms. Besides the excellent presentation of the old telegraph station, there is a cultural precinct that includes a well-designed and displayed museum, research centre, aviation museum, arts centre for aboriginal and contemporary arts, and a cinema and live theatre.

I did not have the opportunity to see the internationally acclaimed musicians and storytellers at the Sounds of Starlight Theatre or tour the Olive Pink Botanical Garden, but I did spend a morning at the amazing Desert Park located about six kilometres from town. Here I found an engaging movie presentation of the geologic history of Australia, and a guided tour that walked us through examples of the sand, woodland and desert rivers ecosystems of central Australia. Through the stories and interpretative displays I was amazed to learn about the diversity of plants and animals of the outback. And the explanations of how the Aborigines found food and water in these landscapes helped me to understand how they survived in a seemingly barren desert environment. Particularly interesting was the nocturnal house that shows the number of animals that come out at night to avoid the punishing daytime temperatures. I left wishing I had been here before taking my outback tour so that I could have had a better understanding of what I was seeing.

Like the heroine in A Town Like Alice, women played a big part in the history of the outback. Their contribution is recognized in the National Pioneer Women’s Hall of Fame. There is also a tribute to the Royal Flying Doctor Service, an Australian icon, at a visitor centre and museum. This service brings aerial medical help to people scattered across the Australian wilderness.

There was another Australian original that is associated with the Royal Flying Doctor Service that I wanted to see when I was in Alice Springs. While I was on a camel trek in the Uluru area there was a young girl of about twelve years of age who helped her dad, the owner of the company, as a camel wrangler. I asked him how she did her schooling and was interested to hear that they used a distance learning program centred in Alice Springs called School of the Air. I was happy to find that there was a visitor centre that provided all I wanted to know.

The people at the visitor centre were very helpful. They have a short movie that explains the school and its students, and good displays to show some of the school’s history and activities. What I learned was that “the world’s largest classroom” was started in 1951 by Ms. Adelaide Miethke, a pioneer and former educator who recognized that children living in remote locations were often very shy. She thought that this resulted from them not having social contact.

Ms. Miethke envisioned a way for students receiving lessons by mail to have contact with teachers over the radio, and make them part of a community. By partnering with the Royal Flying Doctor Service, she was able to use their comprehensive radio system to first broadcast lessons, and later to enable students to participate in question and answer sessions during the broadcasts.

The School of the Air started with “lunchbox” radios, but has evolved over time to use interactive Internet broadcasts. Visitors can watch live sessions from a viewing area outside a sound-proof, windowed studio, and follow along on a television screen overhead. A smaller, second studio is often used for celebrity guests, which have included Queen Elizabeth II; Prince Charles and Lady Diana; The Wiggles; musician, comedian and environmental activist Rolf Harris; and Aussie cricket captain Mark Taylor. One wall bears the signatures of these esteemed visitors.

It was interesting to see the interaction between some of the students and their teacher. These students were about eight years of age, but the program covers children in pre-school, primary and middle school. Students continue on in their senior years by correspondence programs or by going to boarding school. There are about 120 students each year on cattle stations, in aboriginal communities or national parks, at road houses and at military installations.

Each student will spend up to one hour a day in the virtual classroom. The majority of their time is spent in self-directed study, although each is required to have a tutor (often a parent or a hired tutor) for four hours a day. And while the students are spread across 1.3 million square kilometres of outback, once a year the teacher and two school staff will visit each one. Students also travel to Alice Springs three or four times a year for a week at a time to get together for events like sports and swimming. 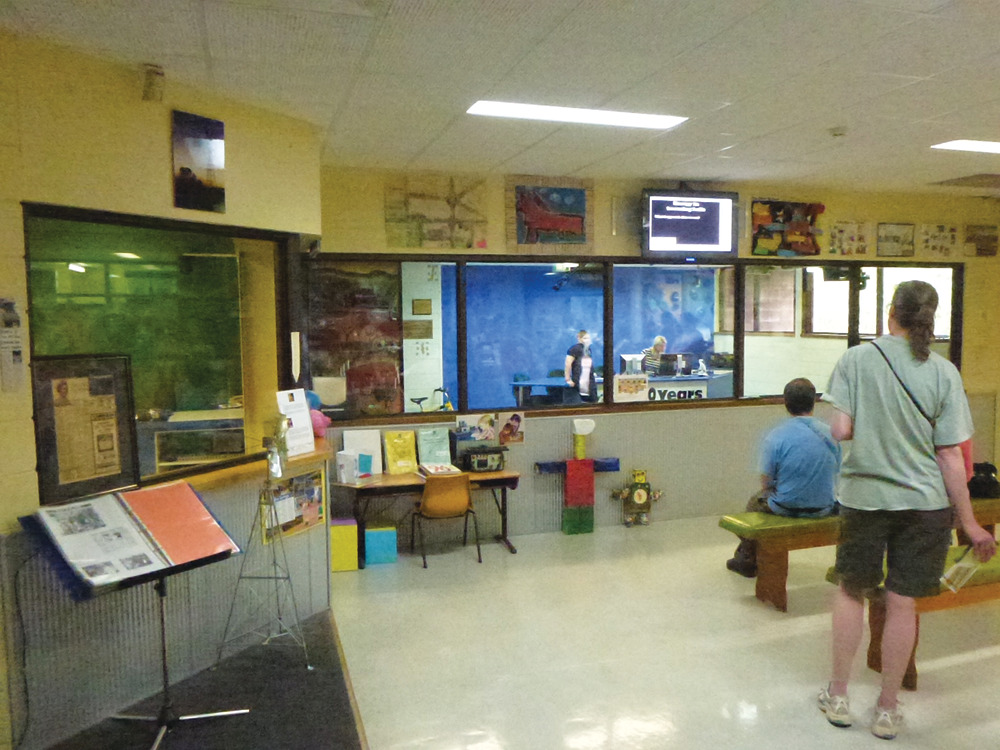 Live studio and observation area at the School of the Air.

Alice Springs School of the Air is reported to rank in the top 10% of the education system in the Northern Territory. Students that choose the boarding school option for further education are said to be focused and mature, and do very well. Government funding and the proceeds from the admission fees to the visitor centre—there were 32,000 visitors in 2011—provide most of the resources required to operate the school, with small supplemental amounts paid by families for maintenance of the computers and technology.

There are now sixteen such schools in Australia, with Alice being the largest area. They include programs for blind children as well as those with special needs.

Overall, I was impressed by the operation and couldn’t help wonder whether there are applications for other sparsely populated areas, like Canada’s north. In fact, I was told that a delegation of twenty educators from Canada had visited in 2011.

All of these attractions were interesting, but didn’t really tell me why people keep moving to Alice Springs. I read that it was due to the continuous sunny weather—a theory defeated by two days of cloudy skies and a deluge of rain while I was exploring the old telegraph station. It had to be more than that. Other reasons suggested that the clean air, wide open spaces and relaxed pace attract people from the coast. After talking to locals and reading about some of the events held in Alice, I started to understand the attraction: it’s all about the people.

To understand, you need to know a little more about what the residents do for fun. The activities range from adventurous, like quad-biking and bush walking, to unusual, a category that includes the annual Henley-on-Todd Regatta and the Alice Springs Camel Cup. The regatta sees teams running a bottomless boat along the dry bed of the Todd River, a zany and popular event. The Camel Cup started as a bet between two locals in 1970. It is held in July and people travel from all over Australia to pit their favourite camel against the rest. The animals can run at up to fifty kilometres per hour and the competition is keen, but the focus is on fun.

Both of these activities provide some insight to the irreverent, fun-loving nature of people in Alice.

Whether it’s a continuation of the pioneering spirit or an amplified version of the Aussie love of having a good time, the people of Alice have it. No wonder the town was selected as the setting for the outrageous 1990s movie The Adventures of Priscilla, Queen of the Desert.

Now I know why there’s no town like Alice, and it seems to be infectious.

Sitting To Learn: Make It Fit