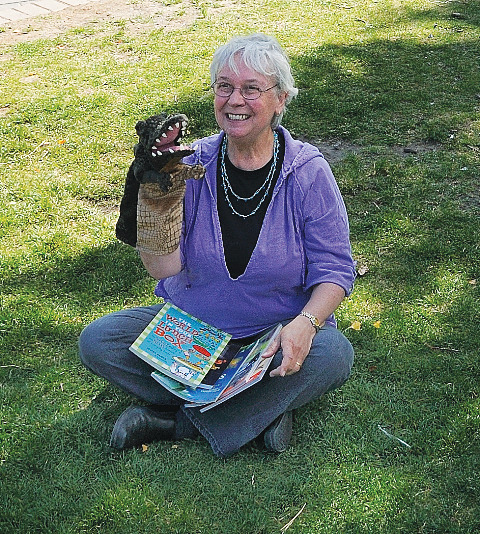 Having lived in Whitehorse, Yukon for nine years, I was thrilled to go back to speak at an educators’ conference. One of the highlights turned out to be meeting another children’s writer whose books I admired: Claire Eamer.

Claire has lived in Whitehorse for many years now. I asked her some questions to get to know her better.

Margriet: Your books include many topics such as science and environmental issues. What inspires you to write a book about a specific topic?

Claire: Curiosity, really. I write about things that intrigue me, whether I come up with the idea or the publisher does. My first science book, Super Crocs and Monster Wings, is about the evolution of six groups of animals. It grew out of seeing a giant sloth skeleton at the Beringia Interpretive Centre in Whitehorse. I wanted to know how that monster was connected with the meek little tree sloths that survive today. When I found out about dragonflies the size of hawks, I was hooked! The publisher wanted a follow- up book so I wrote Spiked Scorpions and Walking Whales, because I’m fascinated by marine creatures, and thought the linkage between water and the evolution of life was important and a good variation on the Super Crocs theme. Besides, I got to work marine worms into it. Love those polychaetes!

My latest book, The World in Your Lunch Box, grew out of research my husband was doing to improve our eating patterns. I got fascinated by the exotic history and cool science of some of the foods we take for granted. As a former picky eater (and mother of a former picky eater), I didn’t want to preach to kids—just help them look at the world around them more closely.

Margriet: What is your research stage like? How do you find out all the facts that you end up using in your books?

Claire: I’m in it for the research! That’s the fun part. Writing and reducing it all to a few thousand words of kid-friendly text is hard work. I read books, magazines, newspapers, articles from academic journals. Once I’ve done that preliminary work, I take my remaining questions to experts. For the science books, I often have long email conversations with scientists around the world. Because I’ve been a freelance science writer, I have a good range of contacts already, and no qualms about asking scientists I’ve never met before for their help. I’ve found that they are generally helpful when you ask about the things they spend their lives studying— especially if you don’t ask the simple questions that you can find out for yourself. They appreciate the effort you’ve already put into the work, I think.

My history book, Traitors’ Gate and Other Doorways, was a special problem. I was writing about eight different places around the world, and I’d only ever been to one of them (the Tower of London). I wanted to make sure I wasn’t misrepresenting the places I hadn’t seen, so I looked for people who had been to the others and asked for their impressions or to check that what I’d written was right. My brother-in-law had been to Petra, Jordan and he wrote a detailed description of what it was like to walk through the Siq and come to the great facade of the Treasury in the morning light. Perfect!

I should add that I couldn’t do this level of research and therefore write the books I do without the Internet. I live in a fairly remote part of Canada, without a university—and therefore, without a university library or experts, except in a few select fields. The Internet and email have opened up resources of much of the world to me. Also, Concordia University College in Edmonton, Alberta appointed me Adjunct Professor of Education, which has meant more resources. I’m enormously grateful to the Concordia Education Faculty since they’ve made researching my books much easier.

Margriet: Are you a teacher? What do you do in schools? How are your books used in schools?

Claire: I’m not a professional teacher, although I have taught English at university level and done some other bits of adult ed teaching. My parents were both teachers. In fact, my dad was head of the Saskatchewan Teachers’ Federation for years so I have great respect for teachers as professionals.

I do presentations in schools and libraries whenever the opportunity arises. In 2009, I got to tour southern Ontario for TD Canadian Children’s Book Week. That was a blast. I spoke to kindergarteners and young teens and everyone in between. Last year, I did sessions with a grade 4 class in Whitehorse, in cooperation with a local artist. We used my book Lizards in the Sky, about habitat and adaptation, and got kids building natural history museum displays with their own invented animals in invented habitats. They were studying animals and habitats as part of the grade 4 science curriculum, but by looking at familiar animals like bears and hares. This exercise let them generalize the concepts beyond specific species. Since they were building the dioramas and the animals out of paper mache, it also let them make a glorious mess. They were very happy!

That’s the kind of use my books are put to in schools. They work well to expand students’ understanding of concepts beyond the range of textbook examples. Both Super Crocs and Monster Wings and Spiked Scorpions and Walking Whales are essentially about evolution and adaptation but through the lens of a few particularly charismatic animal groups. Lizards in the Sky is about biodiversity and extreme adaptations to a range of habitats, so it lets kids think about the demands of habitat and the needs of animals in ways they might not have encountered before. Especially in the North, kids are pretty familiar with local animals. They know where a bear lives and what that place is like because it’s where they live. Learning about a habitat that makes it advantageous for a snake or lizard to glide through the air is far more startling and provokes a different kind of thinking about the relationship with habitat and the adaptive capacity of animals.

There—I’ve said it in the kind of words I never use in my books! I believe strongly that science shouldn’t be taught as abstract ideas (evolution, adaptation) that the natural world is then fitted into. That’s not the way science actually works. It works from concrete evidence and moves toward generalization. I try to keep my books as concrete as possible. Kids are smart. They’ll fit the examples and ideas they come across into the larger concepts they’re learning about—and with a thoroughly satisfying sense of discovery.

Margriet: You have lived in Saskatchewan, Ottawa, Winnipeg, Edmonton, parts of Germany and England. How did you end up in Whitehorse, Yukon?

Claire: I was living in Saskatoon, where I grew up, and working for a newspaper in the early 1980s, but getting restless. I wanted to try somewhere else for a while. My sister and brother-in-law lived in Dease Lake in northern British Columbia at the time, and we all went camping in the Yukon one summer. I liked Whitehorse and thought it might be interesting to spend a year or two in the North, just to learn more about it, so I applied for a job with CBC Radio in the Yukon. Rather to my surprise, I got it.

At the time, I thought I’d spend a couple of years in the North and then move back home to Saskatoon. However, I met my husband there (in the CBC coffee room, actually), we got married, had a son… and, well, time passed. The Yukon is a great place to bring up a child. So, here I am 28 years into my two-year stay in the North. And counting.

Margriet: What is it like to be a writer living in the North? Does your environment play a part in your books?

Claire: I talked a bit above about how important the Internet is for being a writer in the North. There are certainly disadvantages, even with the Internet. I have fewer opportunities to promote my books or to get into schools or libraries to talk to kids than if I lived closer to large centres. The tour for Canadian Children’s Book Week was a marvellous opportunity.

On the other hand, the Yukon is a beautiful place, and Whitehorse is a pleasant small city to live in, with a diverse, supportive artistic community. The Yukon government has programs to help artists of all kinds, including writers, learn their craft and market their work. That sort of thing balances some of the disadvantages. Plus, we have great coffee shops!

The North doesn’t have a huge influence on what I write about. However, I try to sneak a bit of the North into every book. I couldn’t figure out how to do that in Traitors’ Gate, but all the other books have northern animals—both ancient and modern—or northern settings or something else northern. The World in Your Lunch Box has a great Yukon food story—about the bishop who ate his boots. And that’s all I’m going to tell you about that one! 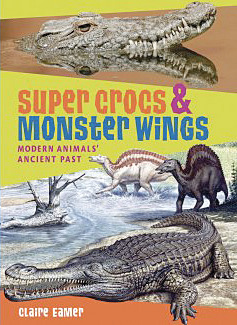 The World in Your Lunch Box: The Wacky History and Weird Science of Everyday Foods (Annick Press, 2012)

Lizards in the Sky: Animals Where You Least Expect Them (Annick Press, 2010)

Traitors’ Gate and Other Doorways to the Past (Annick Press, 2008)

Margriet Ruurs
Margriet Ruurs is the author of 28 books for children. She conducts author presentations in schools around the country. Margrietruurs.com

This article is from Canadian Teacher Magazine’s Sept/Oct 2012 issue.

An Inquiry Unit to Address War, Racism and...

Shaking The World Gently: Why’s and How’s of...