A trip to China had never been on the radar for me—I am a reluctant air traveller at best—but in early August I had the good fortune to be offered a trip to Beijing with Cannetic Travel. And so began my preparation for my journey to Beijing. 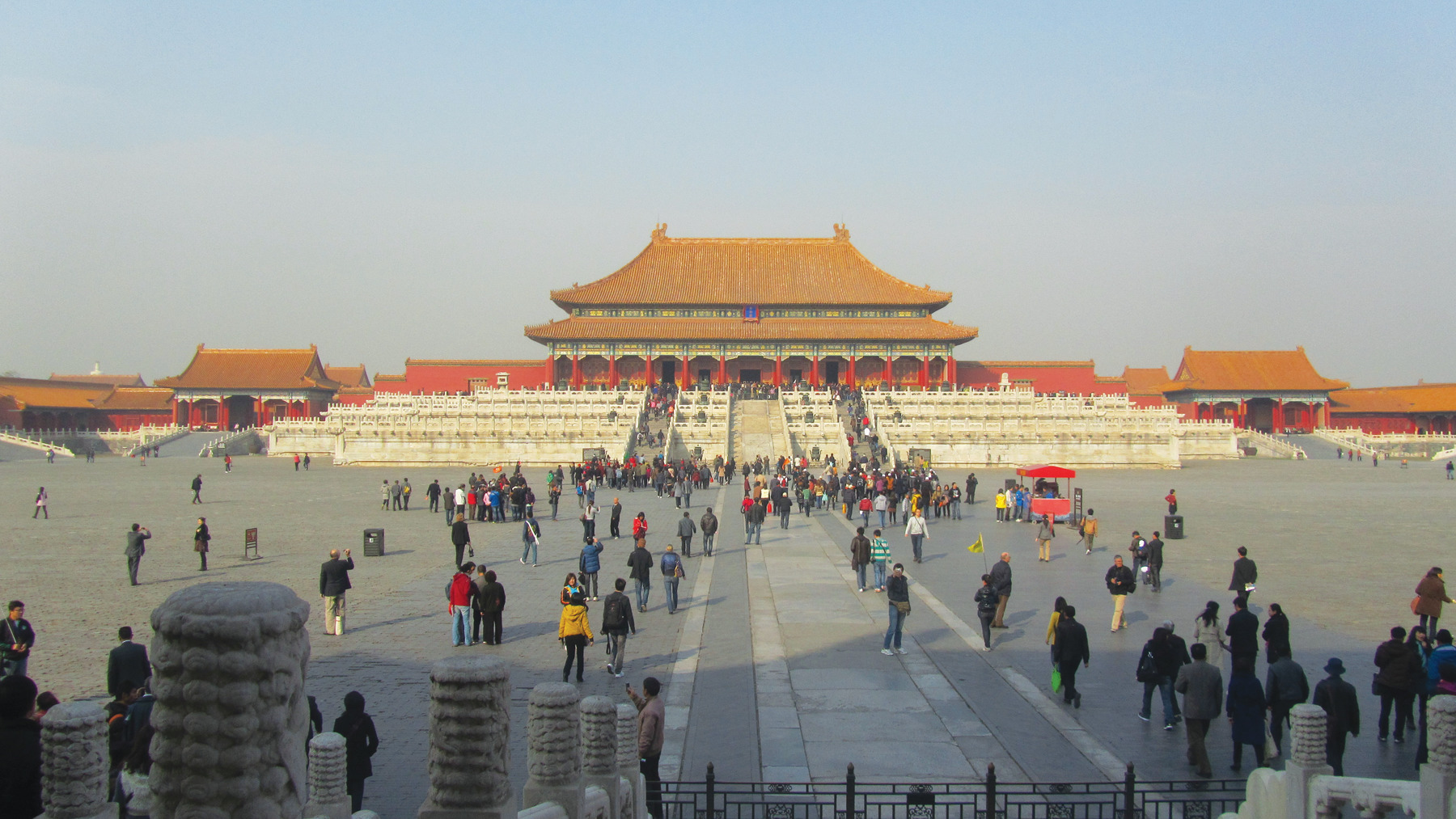 To be honest, I really did not understand the preparation needed to go on this kind of adventure. I made numerous doctor, health clinic and travel clinic appointments to be vaccinated and to become fully aware of any health issues I might encounter in China (note: you need a list of your prescription medications with a doctor’s signature). As a result of all this information, I made up a first aid kit with medications for various problems that could occur. I needed a valid passport and a Chinese visa— travel to China is not done on a whim or as a last minute decision! Also, a most important item that I needed to acquire was a converter for charging my iPod!

It took much time between August and early November to be fully prepared for the trip. I often wondered what I had gotten myself into when accepting this offer and I considered canceling numerous times. I was reluctant to travel that far away on my own as I had not done that before, and, as I mentioned earlier, I am not a relaxed air traveller. But despite my misgivings and at last fully prepared, I made my departure on November 19th. Here is a quick summary of my week, with a few notes about what I learned.

I flew from Vancouver to Beijing on a twelve-hour direct flight, which I found surprisingly smooth and enjoyable—my first fear dispelled. On arrival I was met at the airport by a tour guide and driver. Traffic was very busy—think highways with six lanes in both directions and bumper to bumper traffic. And it was very smoggy. Beijing is so large it would take six hours to drive across town even if the traffic was not busy. After my first (very good) Chinese dinner I returned to my hotel room and prepared for the morning and lights out, as it was 4 am Vancouver time and I was to meet up with my tour group at 9:30 in the morning.

Because I was travelling in the offseason, the group was small—just two other couples. We met our tour guide, Leo, and our driver, Mr. Gong. Our tour this day consisted of Tiananmen Square, The National Museum of China, The Forbidden City, the Silk Factory and a Kung Fu Show. This amounts to a huge amount of walking— you need a comfortable pair of shoes. Ladies, washrooms in China are very different from in Canada. Turkish toilets rule, so wear comfortable clothes and always carry tissue! In Beijing there is security (x-ray) screening prior to entering the square and museums. Our guide was very informative and prepared us on how this works and how to behave. The square, museum and Forbidden City are immense (Tiananmen Square is capable of holding one million people). We returned to the hotel at 8:30 pm, tired but happy. 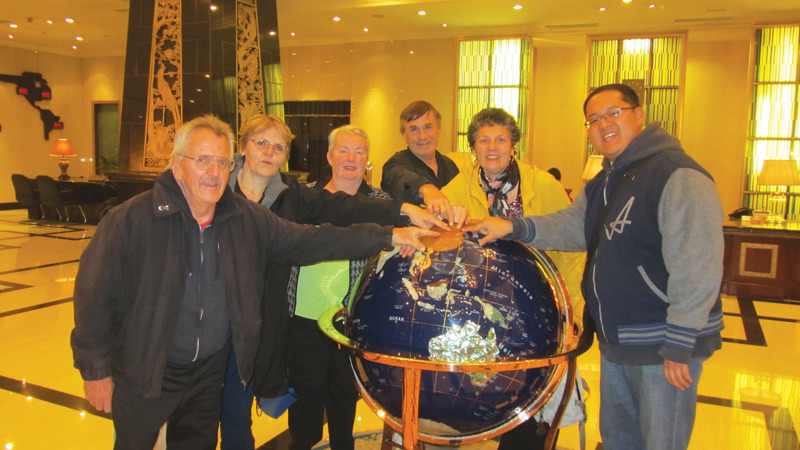 My travelling companions with Leo , our tour guide, on the right.

The group met at 8:30 am to begin our tour of The Great Wall of China (my favourite)— the Juyong Pass Great Wall section. This part of the tour is unbelievable. It truly is a great wonder in our world. I was astounded. The wall has 10,000 to 20,000 visitors per day in the busy season and even though we were there in the off season, it was very crowded. The steps to the top are about eighteen inches high and very steep. I climbed for over 45 minutes and reached about three quarters of the way up the wall. I went to the lower section which overlooks a dam. We were surrounded by the wall. The beauty of it is amazing and I would return to Beijing just to come to the Great Wall again. Later we visited the Olympic Games site and went to an acrobat show. Another long day—wonderful! 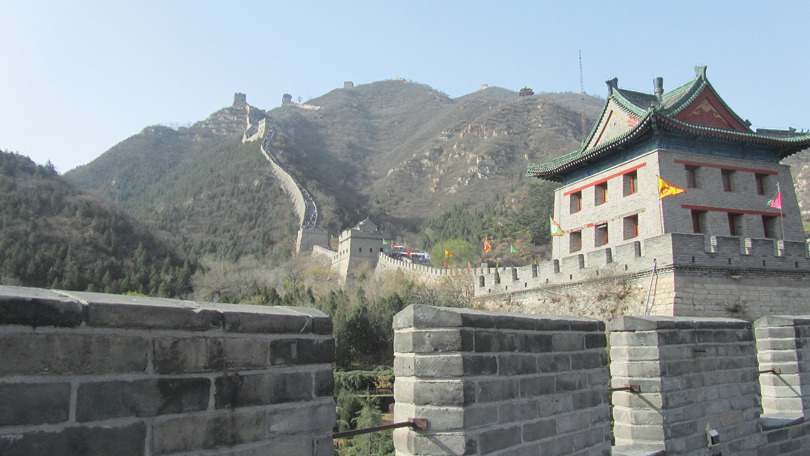 A later start today—9:30! We visited the Pearl Factory and The Temple Of Heaven. In the afternoon we went to the food market, shops, Tea Ceremony and the outdoor food market. 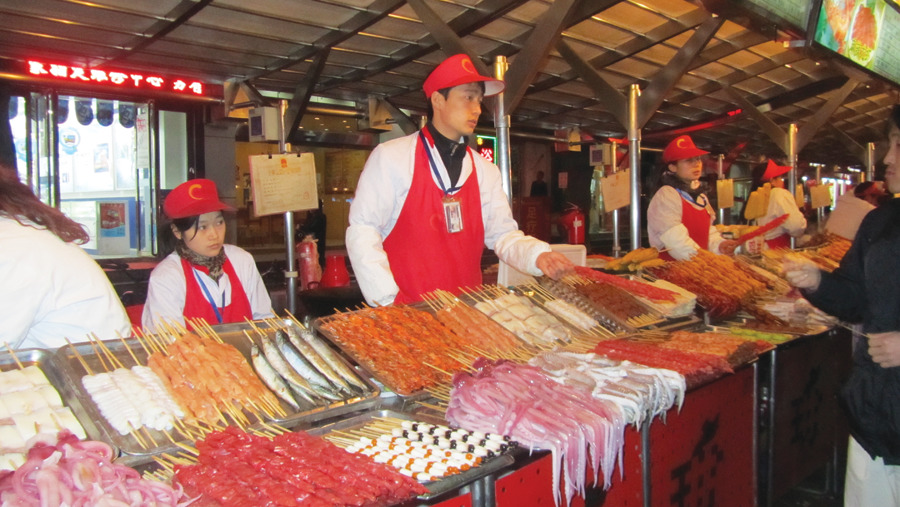 We were driven to lunch at a middle-class home on a rickshaw. Homes in Beijing are very different from Canadian homes. This one was within a compound of about one hundred homes. The roads are narrow alleys with enough room for just one car. Each home has an entry off the alley to an open courtyard with individual rooms on each side and kitchen and shower rooms in the middle. There are no toilets in the homes; about twenty homes share a washroom with toilets. Full-time caretakers live next to the shared toilets and keep them very clean. Later we went to the flea market which is really a large mall where vendors sell goods. We went to a back room and some tried their bargaining skills. Apparently we were there on a lucky day because when the authorities are at the market these rooms are closed. I had previously asked Leo if we could visit the Canadian Embassy and take pictures. A simple request…not! We arrived and when I pointed my camera to take a picture, the security guards were very upset. After Leo intervening and the guardhouse checking with staff of the Embassy we were able to take a few pictures by showing our Canadian passports! Hmmm…I wonder how easy it would be to get help there when it is that difficult to take a picture? 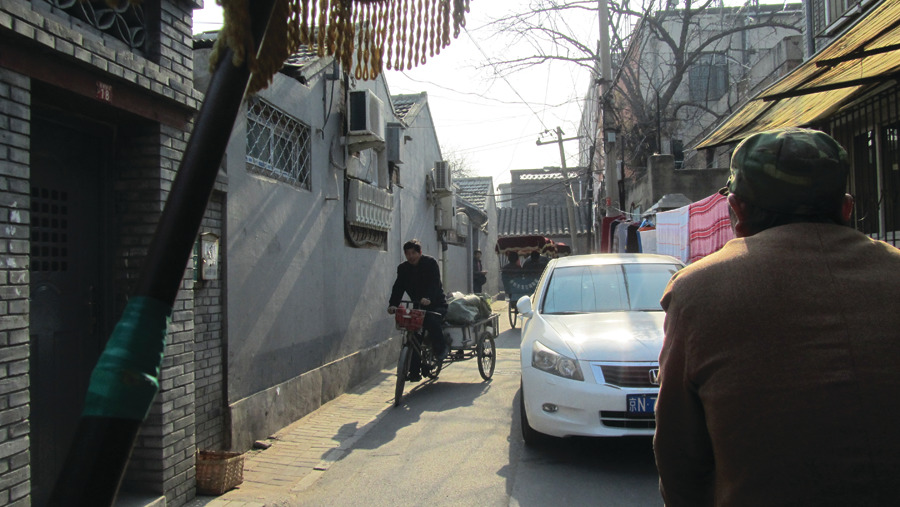 We had lunch at the Big Pear which was the best meal of our tour. Leo chose this restaurant for our group as we had told him we would like a meal where he would normally eat. We then went to the Beijing Zoo. I had been excited about visiting the zoo, especially the pandas. They were sleeping when we arrived but later awoke so we were able to take pictures. The zoo itself was disappointing. The conditions the animals are kept in are undesirable—basically a cage with some logs and dirt. The animals appeared bored and either paced back and forth, dug holes or slept. I would not recommend the zoo. Later we visited the Jade Factory and the Capital Museum. 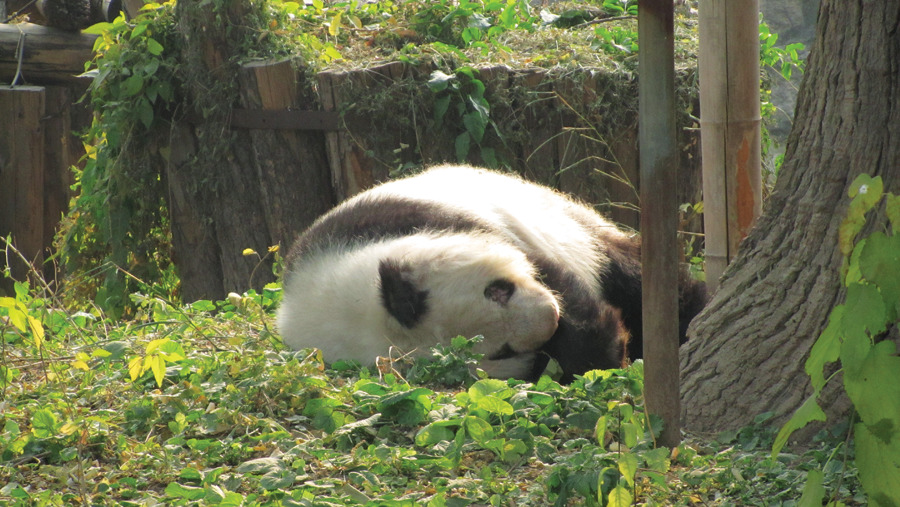 Travel home. The rest of the group left at 9:30 as they were flying to Toronto. Leo picked me up at 1:30 for my flight to Vancouver.

In retrospect, this was a great trip and I would love to visit again and see the Great Wall, return to the Big Pear for dinner and tour the city to see more of the many interesting buildings in Beijing. Our small group enjoyed many laughs during the tour.

I highly recommend this trip to everyone. The cost at $999 plus taxes ($200 more from Toronto) which includes flight, hotel, all meals, tour guide and driver, and all entry to sites toured is incredible. The shows were an additional $40 each which I thought was good value.

Some interesting facts I learned: