Youth and adults alike of the East Shore rural communities that border Kootenay Lake in British Columbia, are enjoying the ambience of their newly re-designed eco-school located in the village of Crawford Bay. The new school was constructed after the original building was found to have mold problems and failed current health standards. 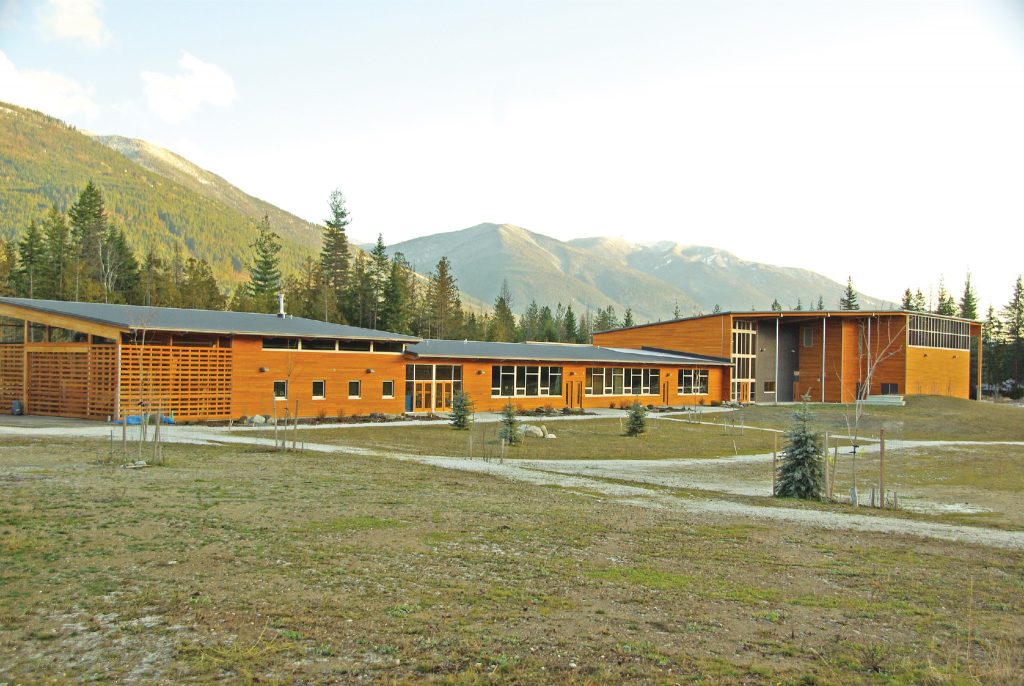 With government funding of $12.7 million to build a “green” structure for students K – 12, a sustainable architectural design was put forward. Local residents then raised an astounding $850,000 to include a preschool, family fitness centre, and other community facilities. The Crawford Bay Elementary Secondary School opened in 2008 and is the first school in B.C. designed to LEED (Leadership in Energy & Environmental Design) certification. Since the small rural community of Crawford Bay has no public water or sewage systems, the new school had to be almost completely self-sufficient.

Using wood from native trees, the building was engineered to allow local labour and expertise for both the architectural design and construction. Shaded by deciduous trees that filter sunlight in summer and allow solar penetration in the winter, the school features large expanses of glass to allow natural lighting for all occupied spaces as well as spectacular views of the surrounding country. Natural vegetation was preserved and landscaping strategies included the planting of native and drought-resistant plant species.

Occupant comfort and a healthful learning environment were of paramount importance in the design of the school. As such, the primary considerations were identified to include the following:

Furthermore, to allow ultimate flexibility for alternate future use, all interior partitions are non-load bearing walls and can easily be modified and relocated. Bolted connections of timber superstructure allow the entire building skeleton to be disassembled and relocated or the components reused.

The water system was created to achieve at least a 20% reduction in use. This was achieved by including low-flush toilets and urinals and infrared water taps. Rainwater collected from the roof is directed onto landscaped catchments on the ground by a series of ornamental scuppers. During rainy periods these devices add delightful sounds as well as visual effects while directing water for landscape irrigation. Excess rainwater is collected by a sub-surface system and stored in a cistern to provide irrigation for the playing fields. General stormwater is absorbed by a series of bioswales then filtered back into the ground to re-charge the aquifer that feeds the wells, thus completing the cycle. Likewise, energy is derived from a geo-exchange system that includes a heat pump and forced air heating. During hot weather, the school’s design allows passive cooling by means of cross-ventilation achieved by opening window vents throughout the school wings. As well, large roof overhangs shade exterior walls and reduce hot solar gain.

In developing programming for the future, staff and community members are exploring options for environmental-based projects, including a greenhouse and root cellar. Over the years, teachers and students have composted all of the school’s organic food scraps with a series of composting bins and a worm farm. The “Farm to School” hot lunch program serves made-from-scratch vegetarian meals four days per week and includes as much local and organic produce as possible.

Principal Dan Rude says, “With this incredible new site and building, we have the opportunity to focus many of the initiatives that we have been working on for years around environmental awareness and sustainability. Our community and staff have had significant input into the building design, and are now in great conversations about how to utilize our green school and site to its full capacity.”