The St. Lawrence is one of the world’s great rivers, carrying more water than any river in North America. Since long before the time of European settlement, this waterway has served as a transportation route, battlefield, source of nourishment and regulator of the natural environment. The western-most reach of the river, from Kingston, where Lake Ontario spills into the river channel, downstream about 165 kilometers to Cornwall, is today divided by the Canada – USA border. On both shores the towns and cities first emerged as places of settlement, commerce and defence. To travel along this picturesque route is to journey through some of the earliest history of conflict and settlement of our two countries, and to tread in the footsteps of those who contributed to the shape and character of the lands that line this divided waterway. 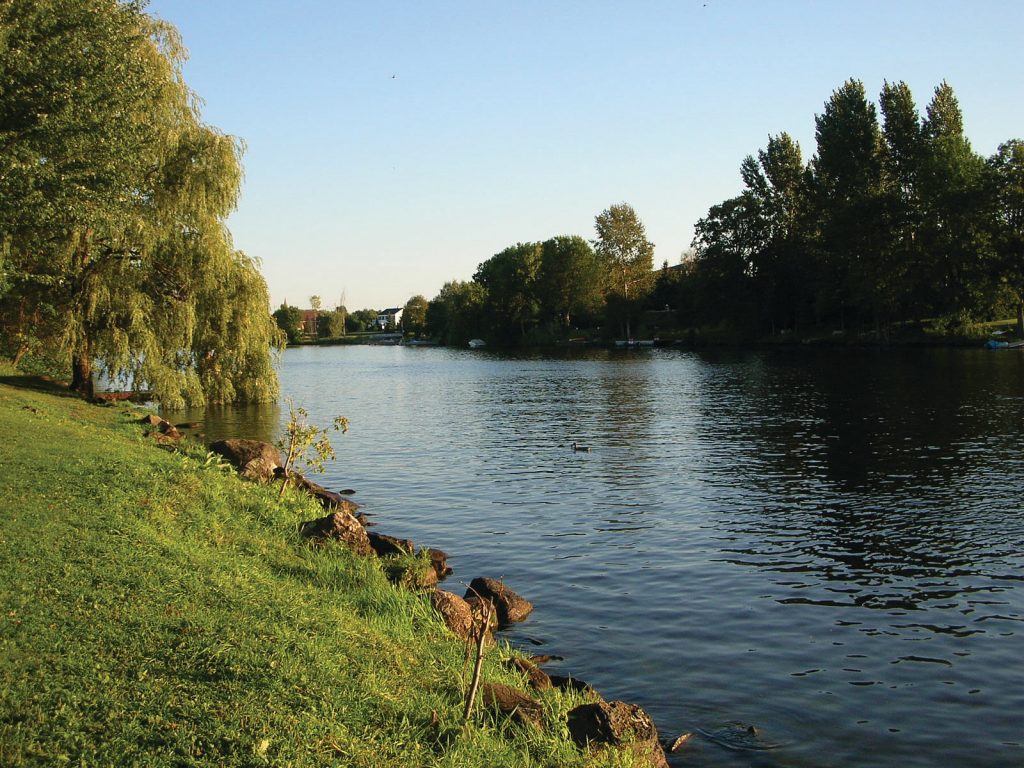 Located in the southeastern spur of Ontario, this region is bordered on the west by the Great Lakes and the more populous areas of the province, on the south by the State of New York, and on the east by the Province of Quebec. From the shore of the St. Lawrence north lies charming countryside encompassed by the curve of the 202 kilometre Rideau Canal, running from Kingston to Ottawa, and the Ottawa River. Kingston is easily accessible by car from major centres like Toronto, Ottawa or Montreal in less than three hours. You could spend a weekend or a week touring through this historic area, the birthplace of Canada’s first Prime Minister, Sir John A. Macdonald, as well as other notable Canadians such as musician Bryan Adams, actress Polly Shannon, former Mayor of Toronto Nathan Phillips and sports personality Don Cherry. 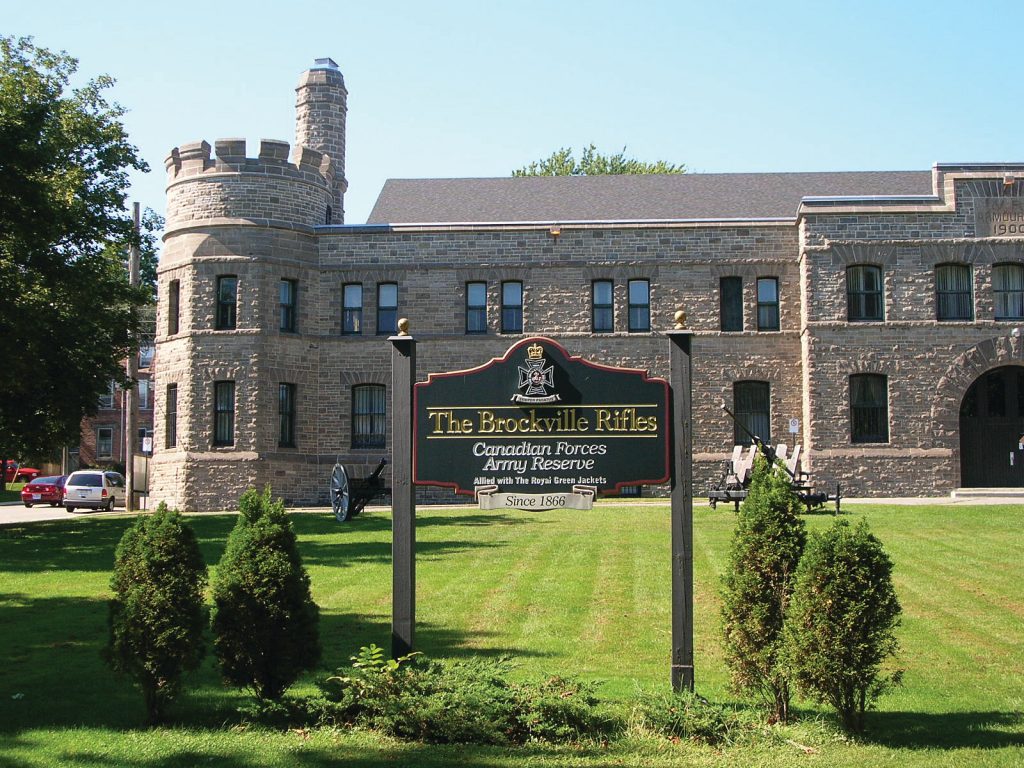 This is a part of Canada whose geography was forged from conflict between the British Empire and the French Empire as part of their colonial struggle, and between the British Empire and the American colonies during the USA’s emergence as a nation. Both marks and landmarks in this area remain from the Seven Years War (1756-1763), American Revolutionary War (1775-1783) and War of 1812 (1812-1815). Fortunately, the communities along the river appear to cherish their history, and in the face of modernization and development have saved and preserved many of their historic sites. To an outsider, there appears to be an easy coexistence between these two trends, which leaves visitors with a view of the fascinating historic record and at the same time a cheerful atmosphere with lots of recreational opportunities that a family will enjoy. 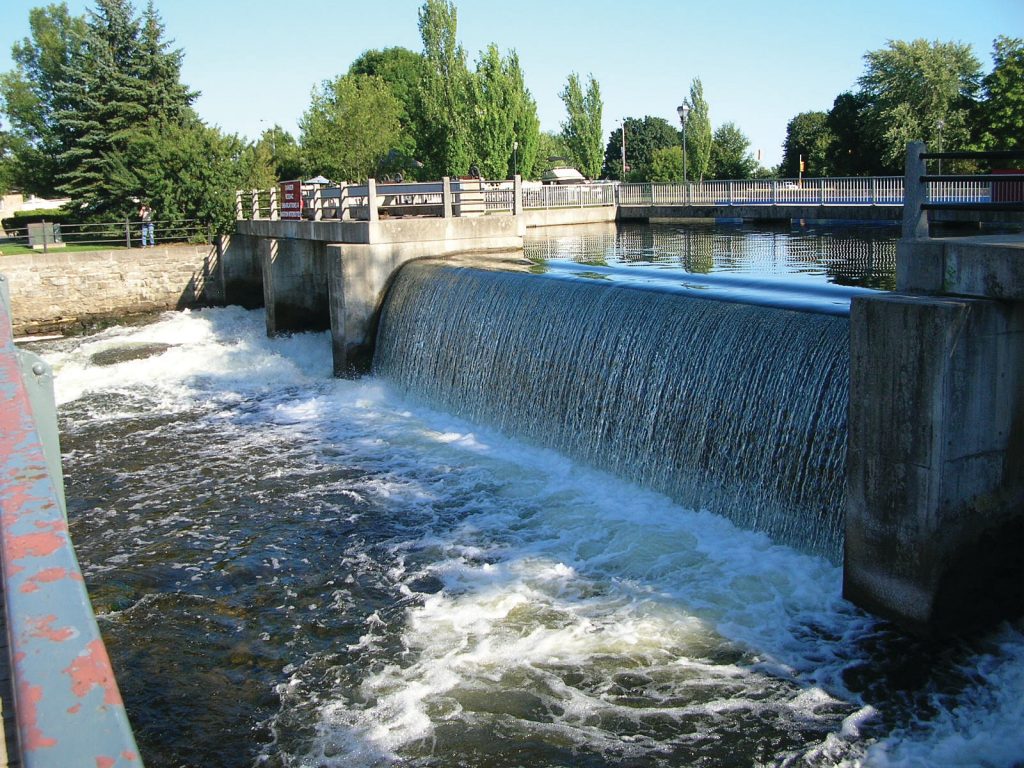 The popularity that this region enjoys is obvious from the abundance of facilities and activities such as campgrounds, bed and breakfasts, marinas, golf courses, tours and festivals as well as the plentiful restaurants and vibrant arts community. But it is perhaps the friendliness of the residents and their pride in their heritage that is most telling. Walking through the town of Brockville, for example, you’ll see the plaques on the stately homes dating back to the early1800s, a time of great prosperity in this area. Brockville, like Prescott, Smiths Falls, Cornwall and other towns in the area, was settled by United Empire Loyalists—people from the American colonies sympathetic to the British Crown who were refugees from the American Revolutionary War. Some of these homes, like the “Baby Bottle” house, are classics in period architecture. 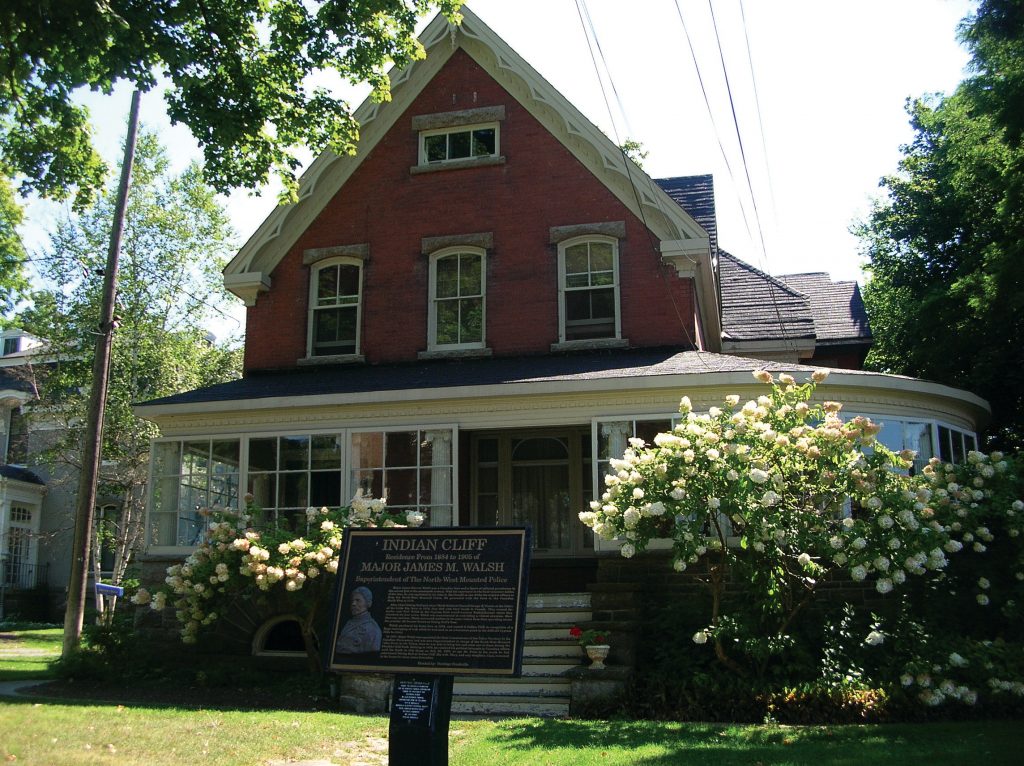 Others preserve moments in history. A house called “Indian Cliff” is one. It was home to Major James Walsh, Superintendent of the Northwest Mounted Police and one of the original ten members of the force. He named it after a rock promontory in Saskatchewan that he used to orient himself when patrolling there. It was at this house that Major Walsh entertained Chief Sitting Bull, whom he had met after he and his chiefs fled to Saskatchewan with their bands following their defeat of General Custer at the Battle of the Little Big Horn in 1876.

Another is Fulford Place, the 20,000 square foot mansion of Senator George Fulford and now a National Historic Site. A businessman, politician and philanthropist, Senator Fulford’s patent medicine company acquired the rights to the famous Dr. Williams’ Pink Pills for Pale People and through clever marketing he became one of the wealthiest industrialists in this young country. 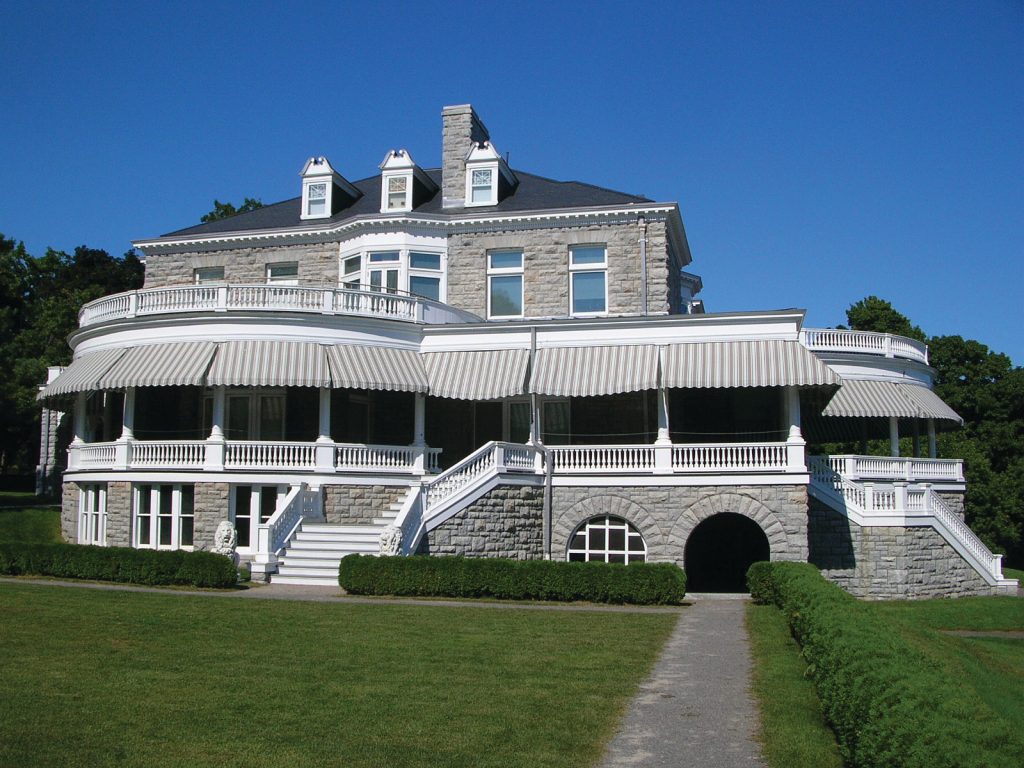 In addition to the rolling green countryside, farms and quaint villages, sightseeing opportunities abound in this part of Canada. Some of the sites include the Rideau Canal—a UNESCO World Heritage Site—the oldest continually operating canal in North America that allows the transit of thousands of pleasure boats through its 45 locks every year, along with the canal museum in nearby Smiths Falls. There is also the first railway tunnel at Brockville, the spectacular “1,000 Islands” shared between Canada and the USA, the wineries near the village of Maitland, the award-winning Upper Canada Village Heritage Park in Morrisburg that depicts life in the 1860s and, of course, the St. Lawrence Seaway itself, the world’s longest deep draft inland waterway.

There are many military sites as well that help to tell the story of our young nation’s fight for survival. Established in 1673 by the French as Fort Frontenac on the Mississaugas First Nation site of Cataraqui, the city of Kingston is preeminent. The site was chosen because of its important strategic location. It served as a shipyard, a supply point and as protection for the Rideau Canal that provided a safe and navigable water route from the Great Lakes and the west to the confluence with the St. Lawrence near Montreal. Kingston still has the original Fort Frontenac, a National Historic Site, as well as Fort Henry and the Martello Towers. 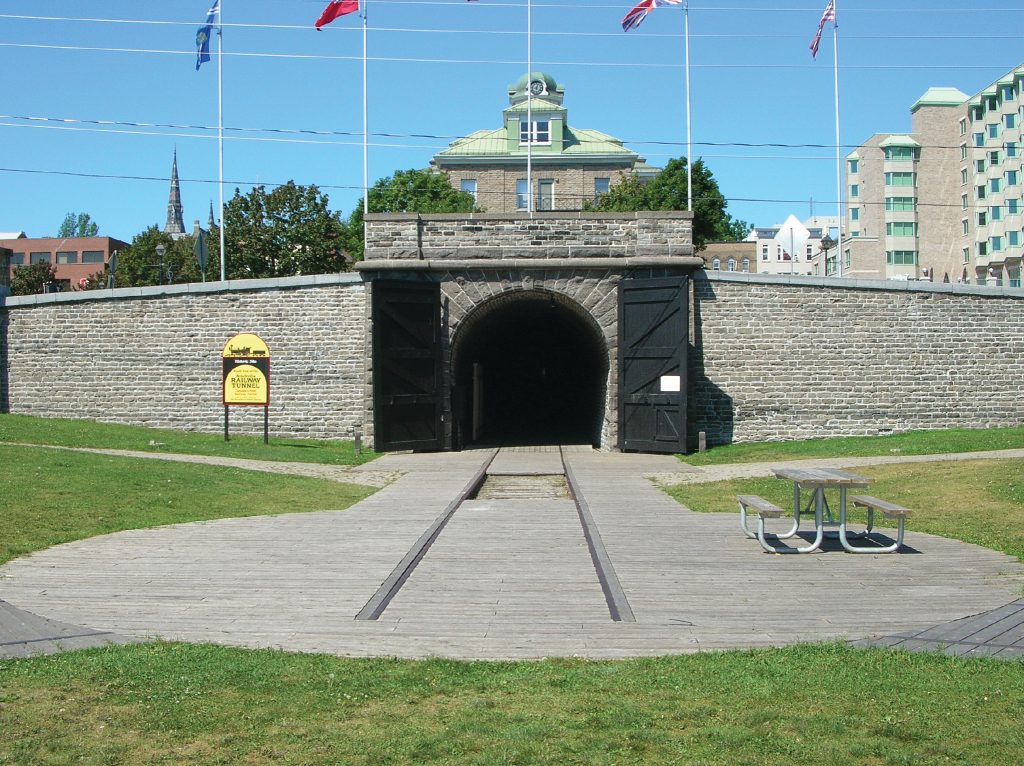 Other historic military sites include Fort Wellington, a three-story stone blockhouse built to protect Prescott during the War of 1812, the Battle of the Windmill National Historic Site, commemorating a bloody four day battle in 1838 between American patriots and the combined forces of the local Canadian militia and British soldiers, and the Battle of Crysler’s Farm Memorial near the former garrison town and supply centre of Cornwall where the Loyalists repelled American troops.

These days the local population is faced with another battle: protecting the environment. Together government, the public, First Nations and universities are studying the river to look at the effect of things like PCBs, mercury and toxic organic contaminants and to act on a Remedial Action Plan identifying eight major environmental issues. Local concern is magnified by the US Corps of Engineers’ plans to dredge and expand the Seaway, potentially disturbing decades of contaminants that lay in the river bed. The St. Lawrence River Institute of Environmental Science is one organization that offers educational programs “to encourage young people to always be mindful of the environment and to foster a life-long curiosity in the natural world.” With the dedication that the communities in this region have shown to preserving their past, there is hope that they may also help to preserve their futures.

Alan Boreham
Alan Boreham is a seasoned sailor and world traveller. He has recently co-authored two books—a series of South Pacific sailing memoirs entitled Beer In The Bilges and a novel entitled Two If By Sea—both soon to be published. Blog: alanboreham.wordpress.com Web: 2ifbyseabook.com

Shining a Light on Great Books: A Night...

The Monster Inside of Me