The students of St. Kevin’s High School in Goulds, Newfoundland invited Father Paul Lundrigan, of the local diocese to discuss his views on issues facing the church today. This invitation was prompted by a recent article in the local newspaper, The Evening Telegram, about the changing role of the church in today’s society. The students explored the role of women in the church, specifically the issue surrounding the ordination of women. As well, they discussed the historical background of celibacy and the church’s view on homosexuality. These issues which remain hot topics in religious discussion were at the forefront for students who sought clarification and explanation.

In a time when so many young people are less and less involved with the church, Father Lundrigan’s personal demeanour and stories of his experience as a priest engaged students in meaningful and challenging discussion. This allowed students to feel comfortable with their questions and to recognize that their concerns were valid and important. Ryan, a grade 12 student stated, “I liked it when he talked about the things that he felt needed to change.” Another student, Julia, adds, “I thought he was so real and sincere. It made it interesting to listen to him.” Father Lundrigan added that he has an uncommonly good relationship with the school and to visit and speak with the students was like a tonic for him. 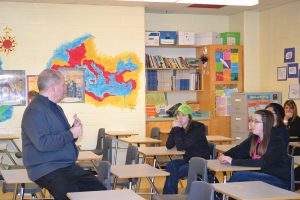 Many of the topics about which Father Lundrigan spoke directly address outcomes of the Religion program. Students examined the historical impact of religion on beliefs, cultures and traditions. They recognized the need for personal search, commitment and meaning in life and the role religion may play in this search. As well, the impact of religion on current issues and events taking place around the world became apparent. Students left the discussion with a more in-depth understanding of how individuals are influenced by religion and that it is healthy and wise to challenge the status quo. In doing so, the church is compelled to revisit its stance on many issues and students are encouraged to challenge their own beliefs. This created fertile ground for learning, reflective thought and exploration.

This article is from Canadian Teacher Magazine’s May/June 2013 issue.

Self-Regulation in the Classroom

On A Clear Day You Can See Anguilla: The Dual Nation Island of St. Martin/St. Maarten

Review of the Basic Journal by Penzu: For...

Hockey: “The fastest game on earth”