The transfer company representative was right there, on time, waiting for our group to come in from Toronto, holding up the sign, “Valerie Kent.” Ten of us streamed towards the sign, luggage already in hand. We had been looking forward to this painting workshop all winter. A couple of the artists had been to Italy previously, but the rest of us were newbies. 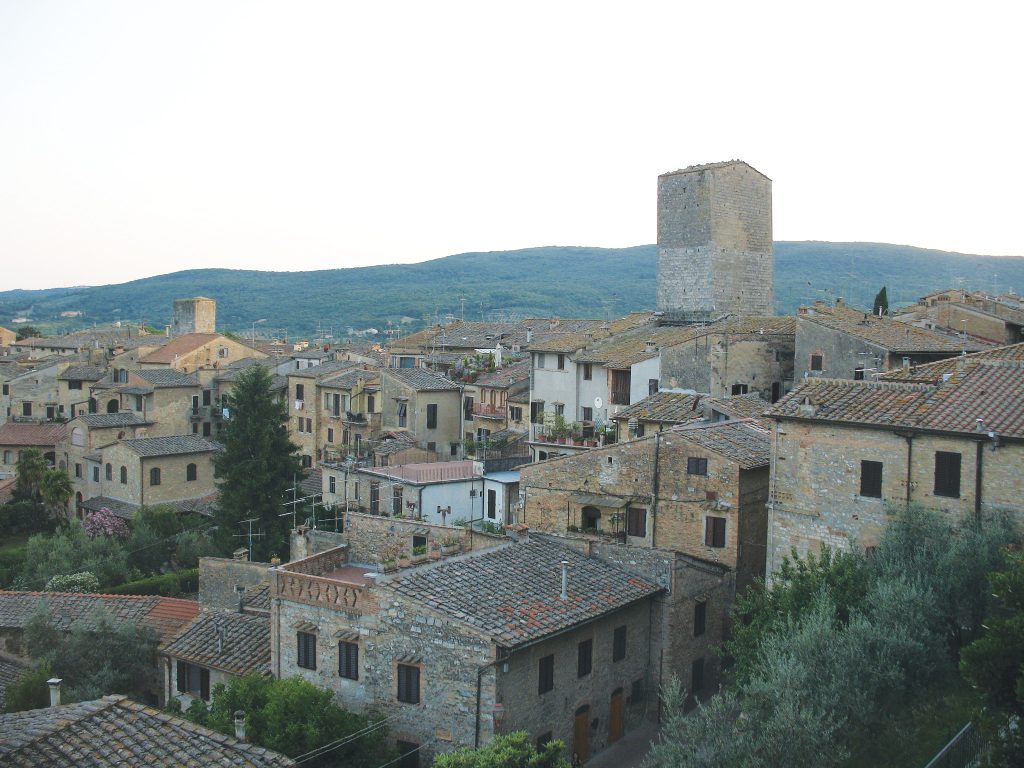 We were all so excited that I thought we would levitate, but actually all we did was board the pleasant little van which headed right up the mountain to the lookout, and took in our first, but by no means last, astounding vista. Beneath our feet stretched the city of Florence and the Arno River. It took our breath away. You just could not stop looking. Everywhere you looked it was unbelievably beautiful.

Our hotel, the Monna Lisa, was tucked away in the historic centre of the city, with its narrow streets and cars practically touching the walls of the ancient buildings as they zipped by. The hotel, which had been a grand residence of the Medici family, was approximately 800 years old. It had a romantic entrance, a garden and a courtyard patio for breakfast when the weather was good. Some of the group painted out in the courtyard in the afternoon. It was a great location in that it was close to many restaurants, attractions and piazzas.

We began our trip by taking a stroll around the neighbourhood, ending up on the Ponte Vecchio, to see the multitude of gold shops built along the bridge and then we went to the little palace, Palazzo Pitti. By the time we got there, the long travel had caught up to us, so we didn’t go in, but sat at an outdoor café, ordered some cooling drinks, then walked back toward the hotel where we found an outdoor restaurant and enjoyed a beautiful dinner together.

Part of the next day was spent doing a walking tour around the centre of Florence through the historic areas. Later that day after wandering around and getting tempted with all the painting venues, we went to see the sculptures in the various Piazzas. Then we went into the Academy where we visited the original David. In the evening, several of the group members painted a large flower planter on a column in the hotel garden to get warmed up.

The third day we left Florence and headed to our next very quaint hotel, which was in a real tower, tall and narrow, named the Torre Antica in the city of Siena. There was a spacious Piazza, the Campo, built where the three hills met. Siena is a town of ancient stone buildings, churches and outdoor cafes and we heard that just recently, they had even had horse races in the Piazza. I was pleasantly surprised that every time we turned around, we found a new and inviting gelateria in Siena. One day we just had gelato for lunch—a lot of gelato.

The first day only Nora painted our little street in Siena with the laundry hanging out the windows, but the following day while scouting, I found the Philosophy Department at the local university and its library had an extraordinary garden which overlooked the town and the distant hills. The philosopher’s garden was a beautiful, green and floral oasis, and we sat in it for quite a while painting happily.

Two days later we transferred to San Gimignano, which is a walled town. It used to have 75 towers, but now has 13. What an extraordinary town with a cistern in the centre of the piazza and fabulous narrow streets and very old buildings. Again, our hotel was an ancient stone building, right in the middle of the town. Several of us shared a large balcony overlooking the fields, hills and valleys spreading out in a panoramic fan around the town.

Afternoons on the terrace were a civilized way to spend the afternoon with pre-dinner drinks and appetizers and the vistas from the terrace while we caught up with each other’s daily painting and touring adventures.

We painted the narrow cobbled streets, the arches and the amazing old buildings. We also painted the towers of the town from our balcony. When it was too hot to paint, we shopped at the many small shops and tried out new restaurants and wines. Many of us went down to the Piazza La Cisterna to sketch or paint the ancient well. We also enjoyed people watching because there were people there from all over the world.

One day we went out to a totally organic farm—Poggio Alloro—for lunch and to try the wines from their winery. We feasted on their fresh vegetables and the owner tempted us with figs right off the trees. They produce extra virgin olive oil, beef, cheese, homemade pasta and fruits including figs and pomegranates on the farm. This was a great place to sketch. I was highly impressed by how the family ran it, how clean it was, and the never-ending views were spectacular. It was a wonderful way to spend a relaxing day.

Almost every evening there was a free concert in the centre of the town practically outside our hotel doors. We would go and eat somewhere lovely and then attend the concerts, stopping for gelatos before heading to bed (the gelatos are always a favourite whenever I go to Italy). We put in fabulous full days and went to bed content, having put in another exciting day with the lovely memory of music ringing in our ears.

The day before we left to go back to Florence, we had the opportunity to have our own exhibition on the balcony of the hotel. We had a vernissage, the reception for which we got wines, cheese and prosciutto—it could not have been better. We took many photographs of our artwork, which was hung out on the dividers on the balcony, and we feasted on wonderful snacks. 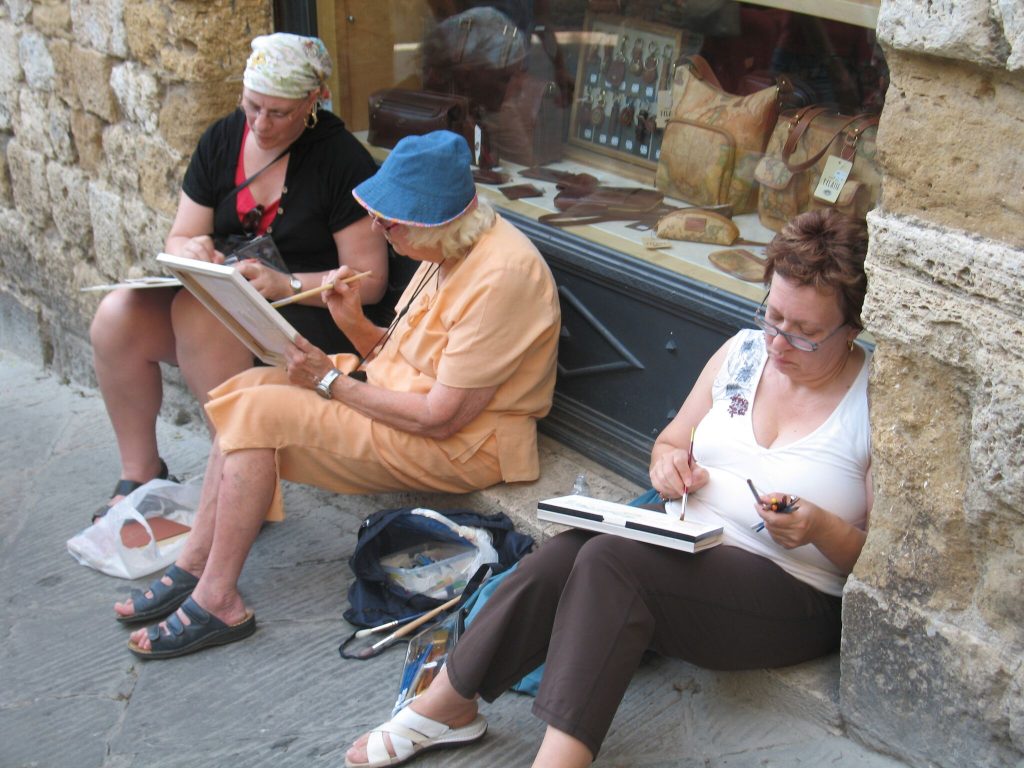 In Florence on the last day, we did some last minute shopping and then met up at the Uffizzi Gallery. It was just too vast to see everything, but we had made a plan to see specific pieces we were interested in, such as the Botticelli and Michelangelo paintings. Sometimes we cannot even imagine how big some of these works are because we have only seen them in books and in prints. We put coins into the fountain at the market with the wish that we would all return some day.

Valerie Kent
Valerie Kent is an artist and teacher who paints en plein air and in her studio. She presents workshops to art societies and at colleges throughout Ontario, as well as offering courses in various media. She facilitates art river cruises in France and overland trips to Italy in the summers. www.valeriekent.com 905-508-5531 artistvalerie@yahoo.ca

Hawaii: An Island of Contrasts

Sitting To Learn: Make It Fit

Ideas for Using Tablets in the Classroom