Field Trip With An Engineer

“Do we have to go down there?” “Will it smell?” Grade 11 biology students were about to visit the washrooms. And the thought filled them with dread.

We were visiting the C.K. Choi Building for the Institute of Asian Research at the University of British Columbia, the first green institutional building in North America. Even the toilets are of the self-composting variety. We were en route to the “bowels” of the Choi Centre to open the bins of “humanure,” all for education, of course! 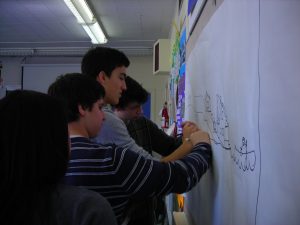 Diana Klein, the structural engineer of the building, was our tour guide. Diana motioned to heavy timbers, “these timbers were salvaged from another building—the UBC Armouries. Each one was catalogued and placed in the building to optimize its strength, and the length of the timbers helped define the width of the building. It’s like putting a puzzle together—we wanted to use whatever we could salvage.”

“Whatever they could salvage” turned out to be recycled timbers, doors, even bricks that had two past lives: as the ballast of a ship and as sidewalks in Gastown.

Klein described how the design team managed to “build green” more than a decade before Al Gore revealed that the truth could be so inconvenient: “Everyone on the team was dedicated to make this happen.” Besides Diana, the design team included Eva Matsuzaki (architect) and Cornelia Hahn Oberlander (landscape architect). They specified recycled materials, green landscaping and natural ventilation. Diana shushed our group, “Listen …What do you hear? Nothing. There is no hum, no HVAC system.”

The design team decided not to connect to the City sanitary or storm sewer, therefore any effluent is treated in a grey water trench outside the building with plants that clean the water. The trench is fed by rainwater from the roof, “tea” from the toilets and water from the sinks. Extensive research with NASA at the Stennis Space Center made it possible to find the right plants. Cornelia Hahn Oberlander chose irises, juncus and sedges to take care of this delicate task. The Health Department had its doubts. When they tested the water leaving the greywater trench filtered by the marginal aquatic plants, they found a coliform count of only 10 parts per 100 mL: fit to drink!1 When the class opened the bins of human compost, my students were surprised, “It doesn’t smell like anything!” And it looked like black dirt. Red wriggler worms digested the waste, and the compost “tea” drained away to Cornelia’s irises.

Anything left behind was fodder for the healthy fauna of friendly aerobic bacteria. Like the beneficial bacteria that colonize a human gut, these microbes simply out-competed the pathogens.2 Nobody ever got sick because of the CK Choi Building.

mentors ▶ grade 11 ▶ grade 8 ▶ students design their sustainable school and present to their parents, their community, their world

Diana’s role as our tour guide was part of a school mentorship activity in Vancouver, BC. The idea was to connect professional designers with grade 11 students so they could learn the basic principles of sustainable design. Our mentors were Diana Klein of Green Bricks and Stanley King of The Co-Design Group. The students, in turn, demonstrated their learning by teaching junior students. Together, they participated in a “charette”—an intense design workshop practiced by architects and engineers themselves. Think “Iron Chef” except the participants are cooking up designs for a sustainable Prince of Wales Secondary School.

First, Diana Klein and Fiona Zawadzki delivered Green Bricks, a fast-paced, interactive sustainability workshop provided free to participating schools (see resources). Then Stanley King, an architect, taught students how to approach design by using the senses. “Imagine that everything has been built and finished to your complete satisfaction… What would you see, hear, smell and touch? How would you move around? Are there people around? How many? What is the mood of the place? And what will you be doing at 6 am, 10 am, noon, midnight?”3 Using King’s “Co-design School Manual” grade 8 and 11 students worked in small groups, discussing and drawing activities that would take place at a sustainable school. The younger students benefited from the respect, care and attention from the older students.

I couldn’t recognize the new school they designed. Drawings depicted an “organic” cafeteria. Scooters, bikes and skateboards invaded the teachers’ parking lot. Students gardened on the roof. There were composters, green walls and solar panels. With projects complete, we invited the community to view the designs in a Sustainable Design Ideas Fair. Green Bricks also invited the City of Vancouver to share the “LiveSmart BC presentation” to the audience. The program presents government grants for green home renovation. This way, parents could act on their children’s enthusiasm for changing their environment.

Our keynote speaker was Cornelia Hahn Oberlander, a pioneer in sustainable landscape design (see sidebar). She is both disarmingly gracious and immovably persistent. There is a bit of the rebel in Cornelia that helps her to connect with young people. These traits enabled her to face down bureaucratic hurdles when she designed the C.K. Choi landscape. She addressed our students:

“With the economy shrinking, this is what we have to do. We have to communicate all these sustainable ideas of sustainable design with your generation. And (in) your generation is the great hope that you will be able to know how to proceed in this very difficult world, so I congratulate you for finding the C.K. Choi Building, which is being discussed amongst architects, as one of the ten best green buildings in North America.”

How did our students respond to Cornelia? One grade 8 boy went home and phoned his grandmother, saying that there was actually hope for his generation because they were learning to save the planet. Another emailed Cornelia to ask her how to become a landscape architect. Even the famously cynical junior high students found her irresistible.

When Ms. Oberlander first practised sustainable landscape architecture, years ago, she did it alone. During the C.K. Choi design, she demanded the impossible: “No trees will be removed during the construction of this building!”4 So they remained. Now, at Prince of Wales, she was surrounded by like-minded youth who demanded the possible. It’s time their voices are heard.

2. Also from the author’s interviews with Cornelia Oberlander in April, 2009. Cornelia described how she researched her gray water trench. There was, at the time, nothing in the literature describing how plants could treat sewage, except for a researcher at NASA. She had numerous conversations with NASA, after which she designed her award-winning filtration trench. She described how the Vancouver Health Department tested the coliform count at the start of the trench, the middle and then the end. The water at the end of the natural filtration process had a coliform count of between 10 and 50 units.

4. Diana Klein described her experience of working with Cornelia Oberlander during design meetings for the CK Choi building. March 12, 2009

Diana Klein is a LEED accredited engineer who was the project engineer of the C.K. Choi building. She specializes in sustainable design. Together with Fiona Zawadzki, Diana coordinates the Green Bricks program. Green Bricks is offered free to high schools and is designed to help youth explore and understand the importance and benefits of sustainable building issues in their schools and communities. Stanley King is an internationally recognized authority on public design participation. He invented a process called “co-design,” a collaborative design exercise that enables citizens to envision their community. Stanley’s Co-Design Group gathered public design input for over 300 communities, including Granville Island and Robson Square in Vancouver. 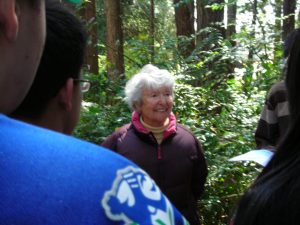 Who is Cornelia Hahn Oberlander?

When I asked architect Stanley King, he reacted as if I’d wondered aloud who Gretzky was: “Cornelia Oberlander is an exceptionally valued person, a national treasure, considered royalty in her profession of Landscape Architecture.” In 1947, Cornelia Hahn was one of the few women who graduated from Harvard in Landscape Architecture. In 1974, she designed gardens on the roofs of three city blocks—a quiet walk in the park, hovering over the city. That was Robson Square and it put her on the map. Her hanging gardens at the Canadian Embassy in Washington DC earned her accolades in the White House. For three decades, she practiced sustainable landscape design—roof gardens, storm water management—and implemented the widespread use of indigenous plants. Look carefully, she’s wearing a medal: Cornelia Hahn Oberlander, officer of the Order of Canada.

“You Have Certainly Made My Day!”: Parks Canada Honours Educators