In this article, I describe my own experiences as a visual art specialist at an enriched math and science high school in Quebec as they introduce STEAM education. I discuss how my grade 11 visual arts students and I designed a creative twist to makerspaces by embracing experimental learning (Kolb, 1984) and by applying Etienne Wegner’s (1998) communities of practice.

STEM is an interdisciplinary approach that demonstrates how science, technology, engineering, and math can function together (Daugherty, 2013). Some schools have adopted STEAM, however, which includes the arts. The arts invite students to use different modes of creative thinking and skills that help solve design problems (Daugherty, 2013). STEAM has the potential to be a model for dynamic classroom experiences, but there are often moments of hesitation and curiosity when new ideas emerge in education (Rufo, 2016). One concern is students will only skim the surface of a topic as content becomes diluted (Peppler and Wohlwend, 2018). The challenge that art teachers encounter with STEAM, then, is figuring out how to embrace all of the disciplines without the art becoming secondary in the learning and only contributing to the aesthetic qualities of a STEAM project (Liao, 2016).

In early September 2017, my colleagues and I attended a one-hour professional development workshop to introduce and demonstrate how STEAM promotes cross-curricular learning, and how it develops twenty-first-century skills. During the workshop, we enacted a classroom activity of constructing a maze that had a marble pass through various obstacles. The science teachers discussed gravity and the math teachers debated angles. Concerning applying art to the maze, I was instructed by my team to “make it pretty.” While the comment was said in a light-hearted way, it demonstrated that the workshop leaders had narrowly explored the possibilities of the arts in STEAM. After this workshop, the science department decided that there would be a STEAM fair instead of a traditional science fair. This was exciting because, as proposed by David Rufo (2016), a STEAM fair model provides more creative paths for students than a traditional science fair model. In his opinion, a traditional science fair constricts students to certain types of thinking and projects. Rufo notes that “change is difficult…For teachers it means having to move out of their comfort zone and beyond customary practices and procedures” (Rufo, 2016, p.16). While I had only participated as a teacher-judge for previous science fairs, a STEAM fair would invite my art students to consider new avenues for their art-making.

The science and math departments suggested that my two grade 11 visual art classes (50 students) participate in the STEAM fair by displaying finished works of art on the walls of the gymnasium. Although it was feasible for my art students to produce works that explored elements of STEAM, I wanted my students to have a more active role. Typically, when students’ artworks are displayed on a bulletin board, there is little opportunity for the students to further discuss their work or interact with the school community. Therefore, I looked to Wenger’s (1998) communities of practice in which the experience of individuals working collectively through the processes of Finding the Art in STEAM Education negotiation is pivotal to generating authentic learning experiences. Furthermore, to embrace more creative paths, Kolb’s (1984) theory of Experimental Learning would be central to the STEAM projects. Kolb claimed that “concrete experiences allows the learner to re-examine and modify their previous sense-making in the light of new ideas” (p. 297). With this in mind, the art students would focus on experimentation and reflection to highlight that learning does not need to end with a final finished product.

To create a community of practice, I investigated the makerspace movement that embraces group interaction, play, and experimentation with various materials (Peppler and Bender, 2013). Makerspaces emphasize process over product. With this in mind, I researched online for art makerspace resources. I noticed that several were focused on students creating craft-like objects (babbledabbledo.com, 2017). Educational researchers Edward Clapp and Raquel Jimenez (2016) questioned whether including art in maker-centred learning experiences provided quality art education learning opportunities. Similar to my own experience, they observed that online and print STEAM resources focused on simple art-making activities. They characterized the projects as “STEM-with-stickers effect, the arts-and-crafts effect, and the artless STEM effect” (Clapp and Jimenez, 2016, p. 486). They suggested that STEAM-focused makerspaces must be “intentionally about integrating the incorporation of the arts into maker-centred learning experiences (Clapp and Jimenez, 2016, p. 489).”

As I presented the creative makerspace idea along with the STEAM fair to my students, their reaction was lukewarm. Students enrolled in the physics, calculus, and chemistry concentrations selected the visual arts option to have a moment in the day without science, and students enrolled in the leadership, debate, and history concentrations were finally free of science. Students were unable to see the possibilities of the STEAM fair and they were thinking within the traditional science fair model (Rufo, 2016). Furthermore, students were accustomed to working solo on projects.

To motivate the students and demonstrate that contemporary artists do work inter-disciplinarily, I presented the work of various STEAM artists. Students were struck by the illuminated installations of Deborah Aschheim who explored the effects of neurological disorders. They were equally fascinated by WhiteFeather Hunter’s work that examined textile techniques and wet biology laboratory practices. By presenting the STEAM artists, it revealed that a contemporary artist’s practice draws upon multiple sources. Additionally, it furthered concepts of collaborative work and experimentation that STEAM artists engage in.

Criteria for the Makerspaces

One area of concern was how to evaluate the makerspaces. While the overarching goal was to utilize Wenger’s (1998) communities of practice and encourage students to embrace experimentation, students were concerned with how they would be evaluated. For the evaluation, the makerspaces needed to fulfill three requirements. The makerspace had to embody all of the STEAM disciplines (Peppler and Wohlwend, 2018). The students had to present research demonstrating how their makerspace embraced science, technology, engineering, and math. And the students needed to talk about an artist who they felt was linked to the overarching theme of their makerspace (Clapp and Jimenez, 2016). Using the Quebec curriculum competencies, the evaluation criteria focused on: depth of the research, the ability to synthesize information, and how the teams presented their research visually (Quebec Education Plan, 2017). 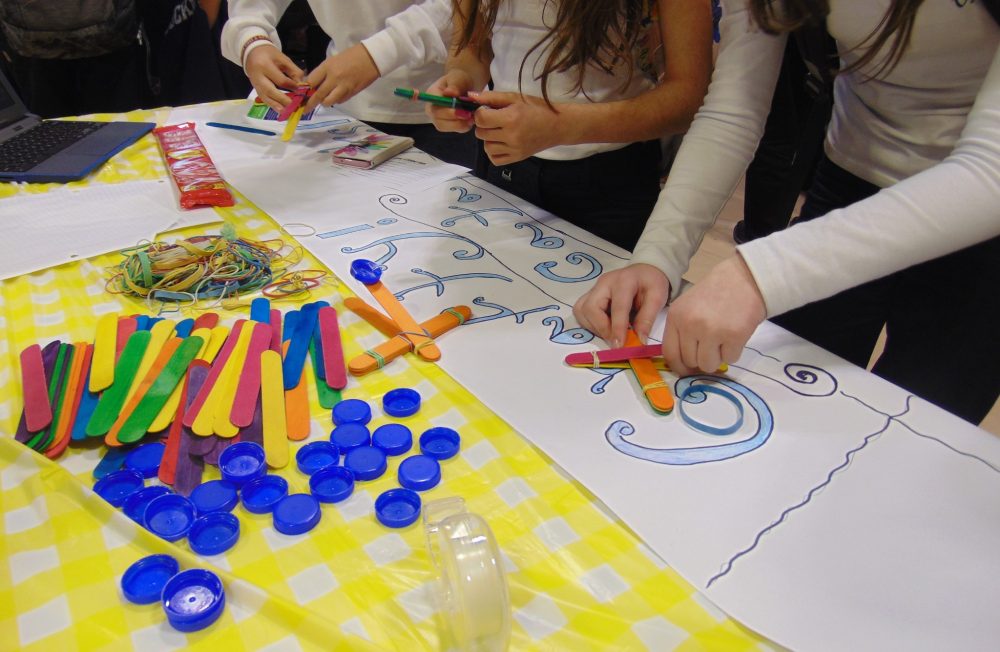 During class time, I witnessed Wenger’s (1998) communities of practice in action. Students became frustrated with each other as ideas were negotiated, but to overcome impasses, they actually listened to each other and accepted alternative approaches and ideas. Due to this, students were forced to experiment with materials and approaches that were unfamiliar to them (Kolb, 1984). By applying experimental learning as the framework for the project, students realized that the process was as important as the product. As students approached me with their ideas, such as exploring the trajectory of paint thrown against a wall, I continuously encouraged exploration. Experimental learning frustrated certain students as they needed more structure and were uncomfortable with not knowing if their makerspace would be successful. 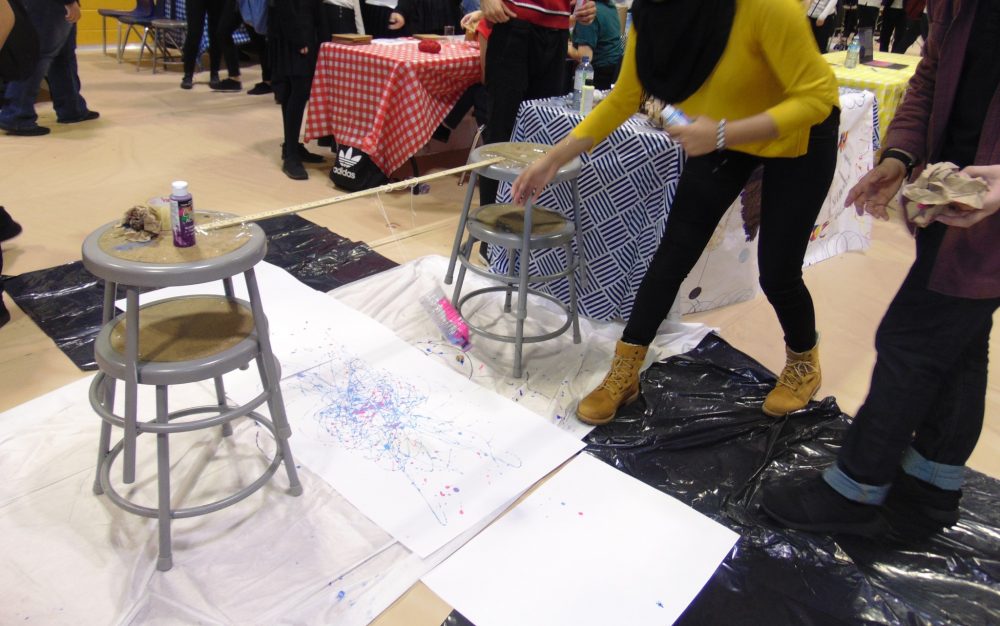 Exploring the physics behind pendulum painting.

A sample of the makerspaces included an exploration of blacklight paint and connections with gravity and Black Holes. A catapult building competition focused on physics and the drawings of Leonardo DaVinci. One team set up an animation station and invited students to produce a collaborative flipbook. Mental illness was explored by a team who wanted students to design and wear stickers that brought attention to stigmas associated with mental illness. Another team that was interested in Alzheimer’s developed a memory game centering on organizing and stacking coloured blocks, while other teams focused on more playful spaces such as candy making and acrylic nail art design. As whimsical as certain makerspaces were, all of the makerspaces were rooted in STEAM and embraced a philosophy of experimentation. 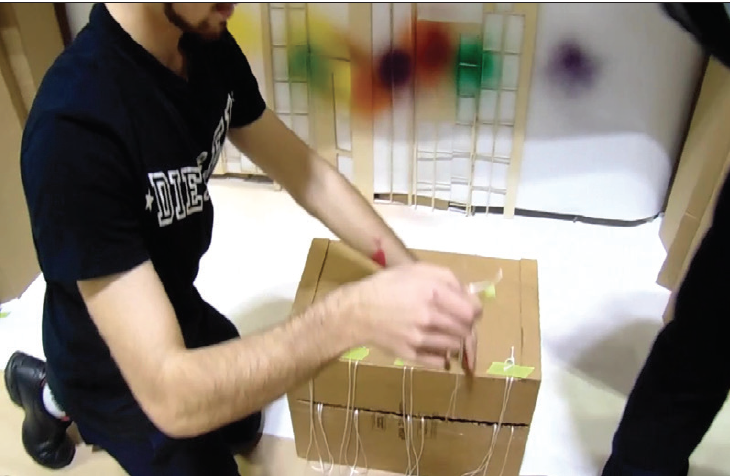 Student adjusting a spray paint box that his team designed.

The goal for the STEAM fair was to create a dynamic learning space where students and staff continued a community of practice in which students from various grade levels and staff learned together at the makerspaces (Wegner, 1998). Throughout the three hours, the area for the makerspaces generated an authentic space for exploration and learning. As suggested by Kolb (1984), “learning from conscious experience is the highest form of the learning life force” (p.337). This was witnessed in the encounters between students and teachers. A number of teachers put on protective garbage bags to experiment with spray paint alongside their students. Students adjusted their projects onsite to solve problems that had not occurred during their experiments in the classroom. I noticed that students who rarely talked in class were animated. This was due to centering the makerspaces on a community of practice model not just within the classroom but within the STEAM fair (Wenger, 1998). 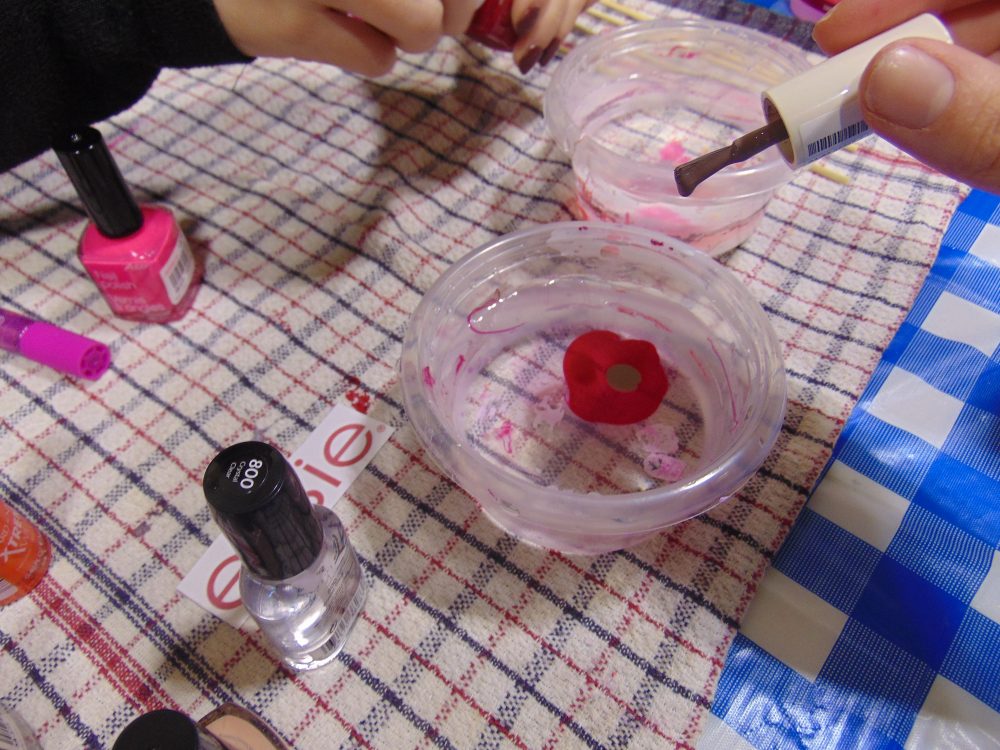 As with any new educational initiative, student feedback was crucial. I invited my students to openly discuss the STEAM fair. Students noticed that the success of their makerspaces relied upon the willingness of students and faculty to work together (Wenger, 1998). They appreciated that the STEAM project was not based upon creating a final project and instead centred on experimentation and the experience. In addition, students discussed the alterations they would have made to their makerspaces based upon their experiences, thus demonstrating that from the concrete experience they saw possibilities to further their learning (Kolb, 1984). This was witnessed by the team that focused on the physics of pendulum painting. The students stated that if given another opportunity, they would experiment more with painting materials. Concerning integrating STEAM into the visual arts class, the majority of the students were against it. Several students feared that if art projects focused on math and science, the art component would be lost and forgotten (Liao, 2016). This was interesting as the students enjoyed learning from the STEAM-based artists.

The experience of participating in a STEAM fair revealed how it is possible to create communities of practice within and outside of the classroom. Students worked together in the classroom and then learned alongside students and teachers during the STEAM fair. It invited new possibilities within the art curriculum by providing an opportunity to learn of artists who worked in a multi-disciplinary way. The creative twist on the makerspaces allowed students opportunities to explore ideas that were either personal (e.g., mental health) or whimsical (e.g., nail art). Furthermore, the STEAM fair demonstrated to students and staff that art is not necessarily a final product to be displayed on a wall but can be a collaborative learning experience.

Julie Etheridge
Julie Etheridge has worked as a high school visual arts specialist and is currently a grade six generalist teacher with the English Montreal School Board. She is a Doctoral Candidate at Concordia University in the Department of Art Education and her research focuses on professional development for teachers in the art museum setting.

Self-Regulation in the Classroom