The day I decided to listen to my Inuit student, Elijah, is the day that changed my life forever and set me on a new professional journey that eventually led me to pursue my Master of Education at University of British Columbia (UBC) three years later. It was the fall of 2009 and I was teaching in a small, isolated Inuit village of 800 people in Nunavik, Quebec. A typical day in the resource room of Ulluriaq School was unfolding as I had begun to work one-on-one with my grade six student Elijah Annanack. Elijah possessed multiple disabilities: language disorder, ADHD, FAS, moderate hearing loss in both ears and visual impairment. In his grade six classroom he was fourteen years old, the oldest student by three years, for the school system had decided to fail him three times for not meeting grade level expectations. Elijah was also a target for bullies and often laughed at for his inability to do classroom work independently. As a way to fit in with his Inuit peers, he became the class clown.

In the resource room on that particular wintry day in November 2009, I noticed that Elijah was Googling “Hohner instruments” on the computer after completing his work. I asked him a question that would be the turning point in our teacher-student relationship. The question was simple, routine and almost unconscious, “Elijah, why are you Googling Hohner?” I was expecting Elijah’s response to be nothing, which was typical after a teacher asked him a question. On this day he surprised me by responding to my question with a simple three-word response, “I love Hohner!” I was shocked and paused to take in his response. I had been teaching Elijah for 2 1/2 years and this was the first time I had learned of his love for Hohner instruments.

The following day for our one-on-one session, Elijah showed up to my class with a beat-up looking but intact Hohner accordion saying, “I want to play!” Once again I was shocked and left speechless. I immediately went to find his Inuit teacher assistant, Rosie Etok, so she, too, could listen to Elijah play the accordion. Both Rosie and I sat very still and asked Elijah to play for us. After many prompts and many “wait times” of at least fifty seconds, Elijah began to play the accordion. He played a traditional Inuit tune for about two minutes. He stopped and stared off in the distance. Rosie and I looked at each other wild-eyed and said to each other, “He is so good!” and applauded his efforts with great gusto. Rosie and I had no idea that he could play. His playing was not perfect, yet was so good we both had goosebumps after listening to him play. Elijah had talent. In that moment, the light bulb turned on in my teacher brain. Endless questions appeared, wanting to be answered. Here was a student’s passion that I could capitalize on and transfer to his other learning activities. After many questions in Inuktitut, and countless repetitive verbal prompts, we discovered that Elijah was given an accordion by the community centre coordinator and that he had been practising at home by himself for the past two years.

Soon after, we all decided that Elijah would do a research project on Hohner instruments. Several lessons later, we discovered together that The Hohner Company, over 160 years old, was the oldest music-making company in Europe. The original factory and museum was located in a small town called Trossingen in southwest Germany. At some point in our research, I showed Elijah on the world map where we lived in the Eastern Arctic of Canada and where Germany was. We also traced the route an airplane would take to get from northern Quebec to Germany and I proclaimed, like any good teacher does who wants to connect a student’s daily life to the global world, “Wouldn’t it be great to go there?” After a fifteen second delay, Elijah turned and looked me in the eye, which is difficult to do as a result of his exceptionalities and stated in a loud voice, “I want to go to Germany!” Six words spoken out loud in a row was a record for him. At the time, I laughed innocently and replied, “Me too!” The school bell sounded. The lesson came to an end and I thought that was the end of our Germany discussion. I was dead wrong, and you know how teachers hate to be wrong.

From that day on, Elijah would talk about nothing else or do any work on anything but Germany. He began to call my home after school or in the early evenings, which is common in the north, and say immediately once I picked up the phone, “I want to go to Germany!” My response was to laugh and then he would play his accordion for me over the phone without any words being exchanged. Eventually, I would put the phone on speaker option so my whole family could enjoy his accordion music. Often my youngest son, Tom, who was five years of age at the time, would declare at the end of a song, “I love that one, Elijah! Play another one!” This daily impromptu music performance by Elijah occurred non-stop for a period of six weeks. I was thoroughly enjoying Elijah’s musical enthusiasm, yet my husband’s patience (he is also a teacher) was waning. One weekend evening, Elijah called our home at 11 pm, woke us all up and demanded that I listen to him play the accordion. At that moment, my husband declared, “Carrie, you have a stalker now. You better do something about this situation!” This was a turning point (unbeknownst to me at the time) for both Elijah and me. I said silently to myself, “Maybe I can!” and went back to sleep.

The next week I made some phone calls to several Inuit agencies in the north that support student-initiated trips. Two local organizations agreed to fund a dream trip if we raised $3,000. I was excited! Elijah and I brainstormed our “fundraising plan” and immediately went to work. Eighteen months later, after countless fundraising events in our Inuit community, we—Elijah, Rosie and I—had reached our goal of raising the necessary funds for our dream trip to Germany.

On May 9, 2011, the three of us boarded the first of three planes that would take us to Trossingen. It was Elijah’s first trip ever out of his Inuit village. Each day brought new life experiences for Elijah. I was there as his teacher to witness and guide his personal journey. Elijah experienced many “firsts” in his life on this dream trip. For example, he got to see how Hohner accordions are made, he participated in a press conference, he performed several Inuit songs on his accordion in front of a small audience, he got his first real haircut in a salon, he ate his first sausage and french fries in a restaurant, and he visited a zoo for the first time! And last but not least, Elijah was given positive attention from everyone he met on the journey who were amazed that one Inuit boy from an Arctic village could play the accordion so confidently in spite of so many disabilities. When we arrived back at the village, the small airport was packed with friends and family. A massive banner, “Welcome Back Elijah,” hung over the arrival lounge. He was now a “rock star” in the eyes of his peers. 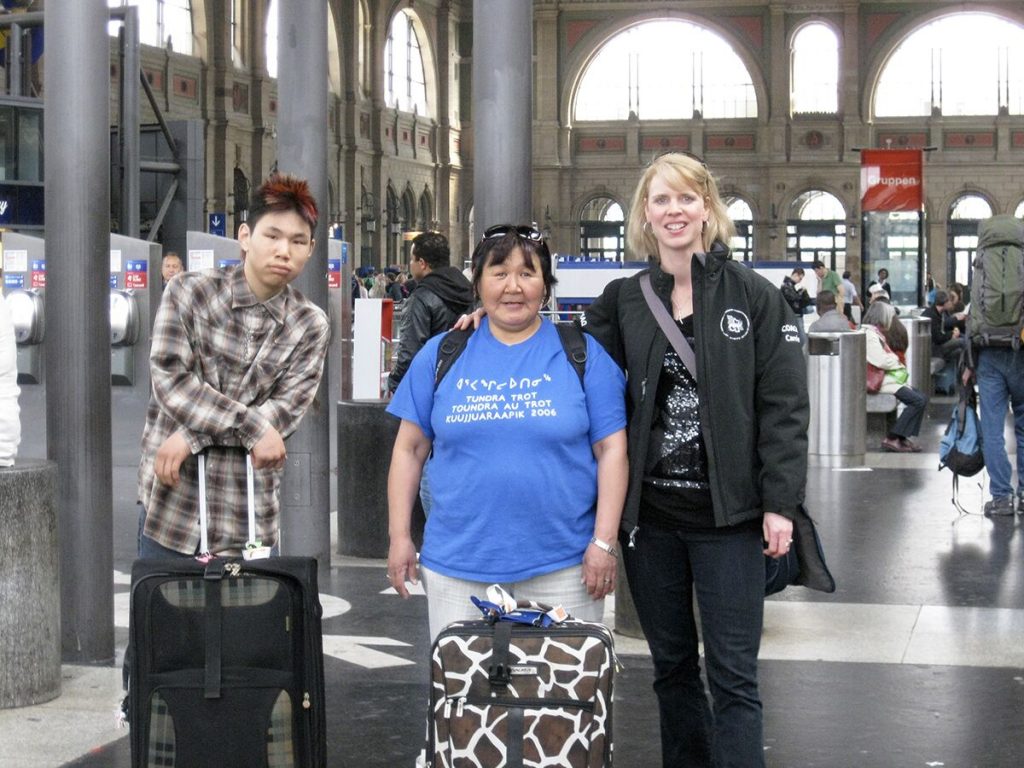 Elijah, Rosie and Carrie on their way to Germany.

After my trip with Elijah to Germany, I had time to reflect on this life-changing experience for both Elijah and myself. I realized how important it is as educators to really listen to our students with disabilities and to seize those teachable moments whenever they present themselves. To this day, I am thankful to Elijah for including me in his musical journey and seeing the bigger world for the first time through his young eyes. I will never forget the quiet joy and pride he exuded throughout our ten-day journey in Germany. Today in 2018, Elijah plays at local musical events in his Arctic village and at musical festivals held in the Nunavik.

Carrie Powers
Carrie has been a passionate teacher in elementary education for 22 years. Her professional journey has taken her around the world from Chile to New Zealand, Toronto, Arctic Quebec and Vancouver. She has taught students in all elementary grades throughout her career as both a classroom and specialist teacher. Since returning to her home city of Toronto in 2016, she has taught young girls in the area of Health and Physical Education (HPE) and enjoys working one-on-one with students with different learning disabilities in Grades K to 6.

This article is from Canadian Teacher Magazine’s Fall 2018 Issue.

A Do-It-Yourself Safari through South-Western Africa