My decision to sit down with my grandfather every Wednesday to record his immigration story was not one prompted by guilt. He never pleaded with me to visit more often, though he was always pleased to see me. My parents never insisted that I stop by to see him. I saw him often, especially when I started teaching in Georgetown where he lived.

These visits came from a search for purpose, a feeling of being unsettled. Though I was happy in my career as an educator, blessed with a wonderful wife who I love more and more each day, and I am surrounded by many supportive friends, something was off. I knew that the best way to remedy this was to turn to the voice of experience.

Surely, my grandfather (Vavô, in Portuguese) had felt the same sense of uneasiness when he decided to leave everyone and everything he loved in the Azores Islands in order to forge a new path for his future family in Canada. There was a lesson to glean from this. I decided to learn this lesson by creating a graphic novel that told my Vavô’s story.

In retrospect, having completed the graphic novel, I see that both my Vavô and I experienced what Joseph Campbell labelled the “monomyth.” 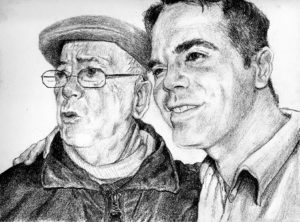 According to Campbell, the monomyth is a story cycle, beginning with an ordinary individual who is dissatisfied with his or her status quo. This monotone life is interrupted by a call to adventure that is accepted, albeit reluctantly, by our protagonist. Training takes place (usually with a wise sage) wherein the hero is ripped from a sedentary life and thrust into a new world filled with uncertainty and new challenges. In the end, the hero conquers fears and adversaries to accomplish his (or her) goals, acquire the treasure, and return home as the master of two worlds: his old world and the special world he just traversed.

The monomyth can be found in countless stories, all the way back to Greek Mythology and is still relevant today. Jason, Hercules and Achilles all followed this pattern, as did Harry Potter, Luke Skywalker and Peter Parker. But what has always made the monomyth relevant is that we all experience its various stages at points in our own seemingly mundane lives; we all have within us a hero waiting for his or her moment.

For my grandfather, the call to adventure was to leave his life in the Azores, including his wife of only five days, to seek a more prosperous future in Canada, not unlike Odysseus sailing to the Trojan War with Penelope at home in Ithaca. It must have been a difficult decision to make, travelling without enough money or enough knowledge of the English language to get by. My call was not nearly as heroic, but life-changing all the same—I realized that I wanted to tell my grandfather’s story by combining my talents for storytelling and art to create a graphic novel. I wanted his story to be the story of Canadian immigrants from all corners of the world. I had neither the skill nor the knowledge to complete this task, and I certainly didn’t have the time, but I accepted the challenge all the same.

The training my grandfather received in preparation for his journey was facilitated by his father, providing him with the work ethic and values he needed to survive in the new world. I, on the other hand, had myriad wise sages in my monomyth cycle, including Vavô, my Uncle Bill (who has always provided me with a moral compass), various drawing and graphic design reference books, my cousin John (a talented graphic designer who provided me with a number of great ideas) and my Department Head, John Merlini, who had faith in my abilities as an educator and sent me to a workshop on graphic novels in the classroom.

Once we had completed our training, we were ready to leave our old worlds and enter new ones—Vavô to forge his future in Canada and I to explore the complexities of art, storytelling and publishing.

Of course, everyone knows that the meat of a story lies not in achieving the final victory, but in overcoming the obstacles that stand in the way of success. For both of us, there was certainly no shortage of these roadblocks. Vavô had to obtain a passport, learn English, leave his wife behind, get a job, purchase a home, and save enough money to have my grandmother join him. My obstacles were not nearly as frightening: my drawing skills were not stellar, I had no knowledge of the programs I needed to complete the project (Photoshop, Illustrator and InDesign), and I was a novice when it came to publishing and advertising. Yet, without these roadblocks, there would have been no learning. After all, who would want to read a hero story that began and ended, “He searched for the treasure…then he found it.” The lessons we learned are the boons or treasures we obtained from triumphing over our fears. Fears of failure and embarrassment dogged both Vavô and me throughout our respective journeys, but in conquering them, we learned perseverance, strength and courage to accomplish lofty goals that at first seemed impossible.

Now that Vavô’s story is complete and he lives on in the pages of the book, it is as though our monomyths have converged. I now feel ready to act out a new role in the lives of my students.

Educators who are charged with the awesome responsibility of shaping young minds must realize that they are not there to serve as the hero who saves their students, rescuing them from academic ignorance. In education, the monomyth belongs not to us, but to our students. We must realize that we are merely wise sages in someone else’s journey, helping our students accomplish their own goals.

And if we really want to help our students, we need to guide them in finding their own call to adventure and be there when they are too scared to accept it; we need to reveal to them that they have the mettle in them to rise to the challenge.

Inspire, be patient, guide without instructing, reveal without pointing, and your students will thrive, becoming intrinsically motivated, lifelong learners in the process. Don’t be a slave to curriculum; instead, use curriculum as a vehicle to teach values and social skills. Be wise sages in your students’ lives. Make Dumbledore and Yoda proud.

Ken Flynn
Ken Flynn is an award-winning teacher, recipient of the 2013 Associate Teacher Award from Queen’s University, and author and illustrator of The Average José: An Immigration Story