The Traveling Teacher – Lessons from the Road 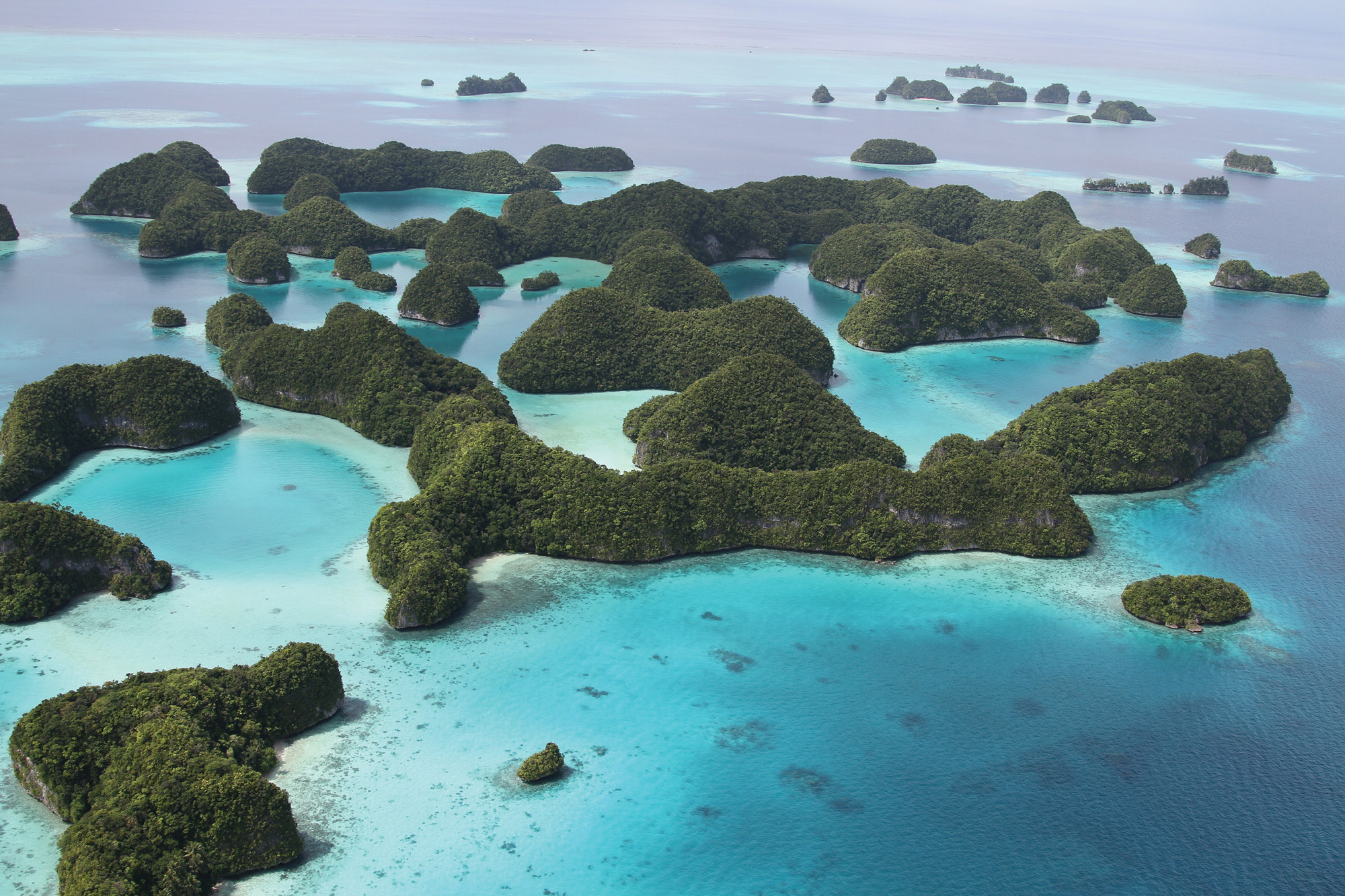 “Dad, I don’t think we can make this!” shrieked my eleven-year-old daughter Hannah from her kayak. Ignoring her sensible pleas, my son Ky and I stroked forward into the open ocean, confident we could outrun the surging tides. With little warning, the surrounding water changed before our eyes from an aggressive but manageable current to an overpowering collection of battering waves. Within seconds both our kayaks capsized. The events that followed over the next twenty hours tested my family beyond anything I could ever have envisioned.

Sea kayaking in the Rock Islands of Palau was going to be just one of our adventurous excursions that would highlight a thirty day family tour through Micronesia and Hawaii. For three days we would kayak in aquamarine waters, snorkel in a protected coral nursery harbouring baby sharks and eagle rays, and camp on an uninhabited island. After hearing what we had planned, my thirteen-year-old son even jokingly suggested that we should pretend to make our own wilderness survival show.

We had pre-arranged the rental of camping equipment and kayaks from a local company before we left for the trip. TJ, our Palauan outfitter, showed us where we would find our beach, pointed out sites of interest and gave us tidal charts and maps. He mentioned that the only portion of open water we would encounter was beyond a point not far from our camping beach. He casually stated that due to the tides, we should paddle around this point no later than 2:30 in the afternoon. As we pushed off we quickly became enthralled with the clear sapphire water and abundant coral. Perhaps paying too much attention to what lay under the surface, we soon found ourselves questioning whether we were going in the right direction. Eventually, after backtracking slightly, we found the proper route and continued on our journey. The point TJ had mentioned, the one we were to pass before 2:30, lay just ahead, and it was 2:45.

After capsizing, the relentless waves continued to pummel us. Thankfully we all made shore at the opening to a sea cave on the point we were attempting to round. Bruised and cut we took stock of our surroundings. Our cave was actually more of a cavern, walls on three sides, with the top fully covered by the jungle canopy. The back wall wasn’t as steep as the sides, but was packed with jagged rock and slippery vegetation. Thick, thorny branches made hiking out the top of the backside impossible. With the surf raging at the mouth of the cave and no way out at the back, we were forced to admit a stark reality—we were there for the night.

We decided we would make camp and wait for the low tide at 7:30 the next morning. Surely at that point, the seas would be calm enough to launch our kayaks. The cave had few flat areas which rendered our tents useless. We managed to find a spot for the four of us to sit side by side, each of us made uncomfortable by a protruding rock or root. We used the four kayak seats as our base, and brought everything we would need in the night to within arm’s reach. We needed to hustle; darkness comes early in the tropics.

We tried to light our tiki torches, but the damp wicks would not ignite. Our only source of light was a wind-up flashlight my daughter had won at her school’s Eco Club a couple of years back. Discounted earlier in the trip as a cheaply made toy, this small piece of plastic would provide our only source of comfort in the night.

The rain started around midnight, a light peppering at first which quickly turned into a hammering downpour that lasted until dawn. I scurried gingerly for the two-person tent. It was impossible to erect it, but the fly and the canvas could at least be used as a cover. My wife Marie held our makeshift tarp over the kids for the rest of the night. 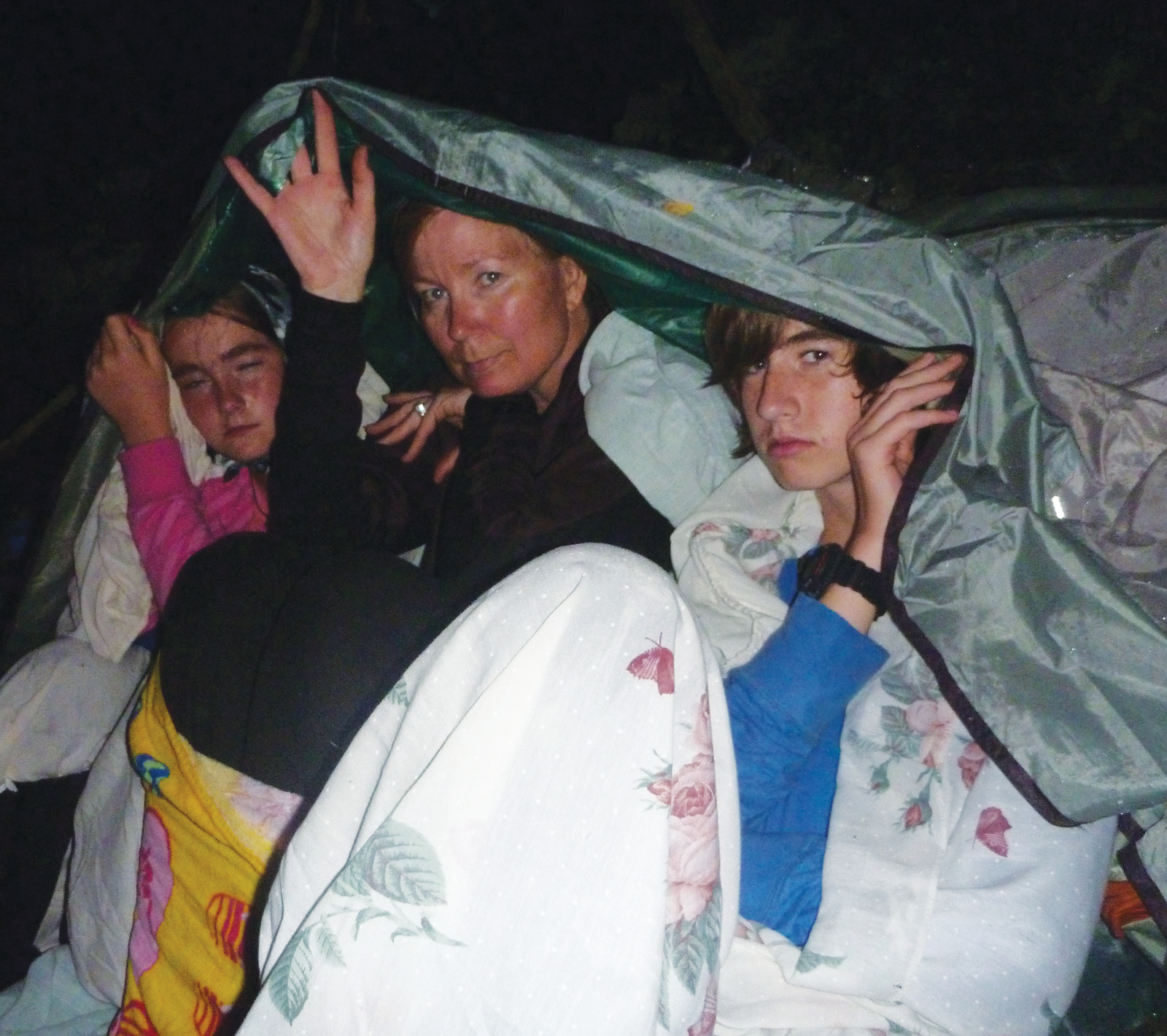 The tide would peak at 12:30 am. By checking the water marks and vegetation patterns we felt fairly certain that we had pulled the kayaks up to a safe point, but for some reason I felt compelled to stand almost the entire night constantly checking the water levels.

Around 1:30 in the morning Marie heard something rustling behind her head. I quickly wound up the flashlight to take a look. The pouring rain splattering over my glasses made it impossible to see clearly, so I discounted the noise as nothing. She was certain that she heard further noises throughout the night.

The hallucinations started around 3:30. First came the mudskippers, fish normally not more than six centimetres long, appeared ten times that size. As each wave crashed in on us, they would scurry up the rock, teeth gnashing, heading straight for us, at least so I thought. At one point the rescue ship sailed into the cave only to vanish as my eyes readjusted at the last second. My greatest fear was the tsunami that I pictured every tenth wave. I feared this imaginary wall of water would drag us into the sea and we would never be heard from again. These visions of mine turned almost comical—at one point I asked Marie if she could see the carrot cakes that appeared on the big rock in front of us—you know, the ones they sell at the Super Centre. She thought I was joking. I wasn’t.

Dawn came, the rain finally stopped and our spirits were cautiously positive. At 7:30 low tide would greet us and we would escape. We waited patiently. Seven thirty came and went; the low tide seemed non-existent. In fact we were all certain that the waves looked even larger than the previous day. Launching our kayaks in these conditions would be foolhardy. Our spirits dropped as we realized we might need to wait until a search party would be sent out for us in the late afternoon of the third day.

“Ky, don’t go up there, you’ll fall on the rocks,” Marie cautioned our son.

“I’m okay mom, just gonna sit here for awhile,” he replied as he scurried to near the top of the back wall.

“Snake,” Ky stated calmly, matter of factly. Not two metres away from where Marie and Hannah were sitting, and heading in their direction was a Banded Sea Snake, one of the world’s most venomous snakes. Normally docile, they are known to become aggressive during mating season. Our new associate was unquestionably a female as she was around a metre and a half long. Given the eggs that my son later found in the crevices of the cave (the Banded Sea Snake is the only sea snake to lay its eggs on land), surely she was at some point in the mating process.

Was this the only one? Were there babies to consider? That sound Marie complained of at the back of her head in the dark of the night, could it have been the snake? Questions filled the air as a new round of panic overtook us. Sure, I could have whacked the snake over the head with a paddle, but for some strange reason all of us thought this wasn’t right.

The snake had allowed us one night’s lodging, but perhaps her confident presence that morning was an indication two nights might be pushing it. If one of us were to be victim of her venomous bite, they would be dead in minutes, not hours. Simply put, we could not stay another night trapped in this cave. 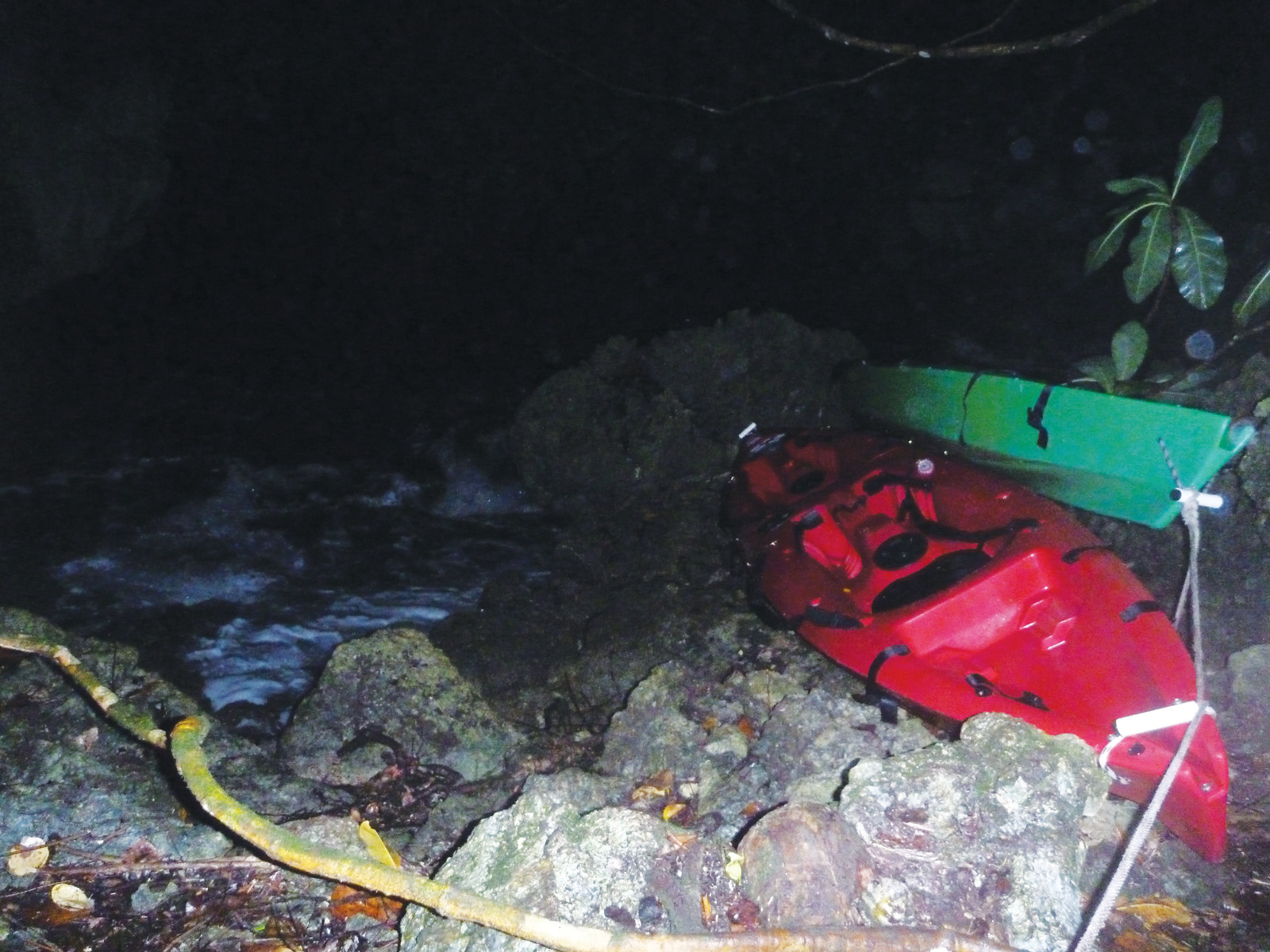 Better judgment aside, my hand forced by the snake, I prepared for a solo launch into the raging surf. If I could make it around the point, I could paddle the 1½ hours back to our launch dock and get help. However if I capsized again, my family would be isolated for another evening, this time with the knowledge that a serpent ten times more venomous than a rattlesnake shared their surroundings.

Our goodbyes were impossible to script. My son’s raw emotions were expressed through a string of almost incomprehensible phrases. My daughter’s tears quietly inched down her cheeks as fear stared from her eyes. My wife stood stoically, with her arms around her precious babes, ever the protector. I had not seen this look on her face since the day she gave birth to our son. I felt my own lip quiver as I prepared to bring a kayak down to water level.

Just getting the kayak to sit in the cove perpendicular to the surf was an intense struggle, but eventually I righted the craft and waited for a lull in the waves. The push-off was successful, but not without challenge, as two large waves pounded me close to the tipping point. Luckily I remained upright, and as I rounded the cove just before moving out of sight of my family I screamed, “I’ll see you guys in two hours!”

For the next seventy-five minutes I paddled as intensely as I could, thirty strokes, rest for ten, fifteen strokes, rest for five. I made good time and as I neared the dock I encountered a Palauan boat hosting a group of tourists. At my polite insistence, they lent me their cell phone.

The rescue boat from an affiliated dive shop appeared at the dock within ten minutes. Three young employees were on hand. I gave them our location and we were off, moving swiftly through the water thanks to the power from twin 160 HP engines.

When the rescuers saw where my family was, one blurted out, “Who sent you out here?” When told the answer, he simply shook his head in disbelief. They managed to anchor the boat fifty metres offshore. The skipper maneuvered his craft as best he could, while the relentless waves showed no signs of easing. The three of us dove into the sea and struggled to shore, one rescuer holding a tether that would soon bring each family member onboard. They took another ten minutes to gather up all our gear and get it back to the boat, and then we were off. Our collective relief at that point was palpable. We praised our rescuers, forever beholden to their acts of bravery.

I had originally blamed myself for missing TJ’s tidal warning by fifteen minutes, but after talking to our rescue crew and seeing the false low tide early that morning, I knew that those lost minutes were immaterial. The area where we capsized was witness to a wave pattern it had not seen in many years. Upon returning to safety we found that a strange combination of natural events may very well have contributed to the unusually rough seas we encountered. Just 700 kilometres away a typhoon had hit the Philippines—surely this weather pattern could have been an influence. As well, Palau had suffered an earthquake the day before we departed. It was relatively minor, just 5.0 on the Richter Scale, and no tsunami warning had been issued, but certainly this must have affected the sea as well.

In the end, our original sea kayaking excursion became a quiet afterthought. My family didn’t need to pretend to participate in a wilderness reality show anymore; for those twenty hours trapped in a sea cave on the Rock Islands of Palau, we lived and survived our own adventure.

Steve Chopyk
Steve Chopyk has taught for 25+ years. He currently teaches ELL in Markham, Ontario. Along with his wife and two teenage children, he continues to take the road less traveled.

This article is from Canadian Teacher Magazine’s Apr/May 2014 issue.

Giving Back in Retirement: Learning and Teaching – Always