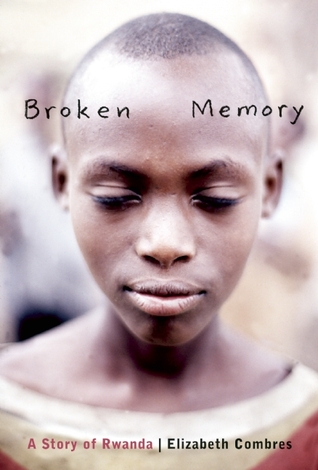 Broken Memory
A Novel of Rwanda

Although this is a work of fiction, the historical content is real. The author spoke with many adolescent survivors of the genocide that took place in Rwanda in 1994. From these conversations, and those with aid workers and psychologists, Elisabeth Combres created this story of Emma, a young Tutsi survivor. Hiding behind a chair, Emma did not see her mother murdered, but she heard it. At the age of five Emma was an orphan who “slept in the bush, went for long days without eating,” and “walked between the dead bodies that blackened the fields and the roads.” Eventually Emma was taken in by an old Hutu woman, and there she lived for nine years. This act of courage by the old woman was not without its dangers, as the Hutu killers would have slaughtered them both if Emma were discovered. As the years passed, Emma remembered her mother’s face less and less, and continued to suffer from nightmares. She befriended another genocide survivor, Ndoli, who was physically and emotionally scarred from the torture he endured. When Emma recognized the voice of a prisoner on a truck as that of the man who murdered her mother, she collapsed and fainted near a wall. It was Ndoli who stayed by her side throughout the night. Ndoli and Emma were helped by the nameless “old man” who ran a clinic which helped young survivors cope with their trauma. Through his kindness and patience Emma began to recover and soon found the courage to visit her former village. It is there that she made a discovery that enabled her to begin to deal with the past and look to the future.

The two children in this novel represent the many thousands of children who suffered during this horrific time. It is also a story of hope, and of the immense courage of the Tutsi survivors, and of those Hutus who were against the slaughter. It is a story of a country trying to heal itself.

This review is from Canadian Teacher Magazine’s May 2010 issue.