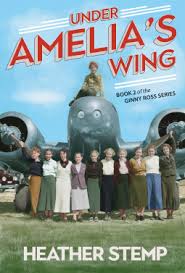 Under Amelia’s Wing
Book 2 of the Ginny Ross Series

Former English teacher Heather Stemp, whose family originally hails from Newfoundland, has written a sequel to her 2014 novel Amelia and Me. Stemp’s protagonist remains Ginny Ross, a bright teenage girl from Harbour Grace, Newfoundland who has gained entrance to a Purdue University mechanical engineering program partly through the influence of her idol Amelia Earhart. Essentially a “fish out of water” tale, Under Ameilia’s Wing deals with the sexism of the 1930s, when young women were expected not to pursue STEM-related studies but, at most, home economics degrees. Ginny’s greatest challenge turns out to be her room-mate Mabel’s uncle, Professor Jones, who is determined to get the young Newfoundlander to quit the engineering program. There are clashes that see the majority of her classmates turn on her, just for being a female engineering student, but she perseveres and eventually acquires a group of close friends and a pilot’s licence.

Classroom Connections: Stemp has crafted an engrossing tale that intermediate-aged readers will enjoy. As the father of two young women, I well remember their fascination when they first heard of Amelia Earhart, and the still-unsolved mystery of her disappearance. This novel explores the university experiences of one slightly naïve but very determined teenager, as well as important world events in the 1930s and 1940s. Under Amelia’s Wing is thus a treasure-trove of potential classroom activities, including many that could be cross-curricular. For example, Mabel and Ginny create a detailed map of Earhart’s 1937 final flight and, as the second world war erupts, they track events overseas (such as the Anschluss in Austria and the Nazi invasion of Poland) through a world atlas. Clearly, the novel could prompt some lively classroom discussions about sexism and gender expectations.

This review is featured in Canadian Teacher Magazine’s Winter 2021 issue.

Moses, Me, and Murder

The Lookout Tree: A Family’s Escape from the...