Today’s educators are nurturing a generation of environmental problem-solvers and leaders. There is no greater time in history than now to work on innovative solutions to decrease the impacts of man-made issues. This series highlights the accomplishments of students who are helping to restore our planet’s fragile ecosystems.

In order to fight plastic pollution on-site, students at British Columbia’s Pearson College are engaging in a project to build their own small plastic recycling facility. Plastics to be sorted are gathered on campus as well as from the neighbouring community and local beaches. The blueprints the students are following for their workshop and machinery construction were designed by Precious Plastic, an organization in the Netherlands that shared its technology. The goal is to make the Pearson College Precious Plastics project sustainable through the sale of items from the production of recycling plastics. Profits will be used to maintain the workshop as well as to support other campus initiatives.

As Pearson College borders the Pacific Ocean, students are well aware of the urgency for conservation to protect it from further pollution. Due to the glut of single-use plastics together with inadequate public education, regional recycling facilities are able to process only approximately 9% of the volume they receive. Inspired by their Marine Science class and beach cleanups, students saw the need to address this issue as an example for other classmates, which in turn, hopefully, will lead to raising public awareness in their Victoria community. Antoine Croquelois and Eden Zandstra, students responsible for the Precious Plastic Project, stated, “These outings gave us the idea to recycle plastic from the beach and from the campus. Because we are so passionate about the issue, we formed an amazing team and designed the activity based on an idea from Dave Hakkens, as well as organized the funding through contacting equally minded environmentalist organizations.”

There are still several challenges facing the implementation of a new facility on campus. Although becoming self-sustainable is the end goal, available grants are stretched when creating a fully operational workshop, therefore, students are also reaching out to local industries and organizations to help fund the initiative. Heather Gross, Deputy Head and Vice-President, Education and Programming at Pearson College, said, “One of the best things for a teacher is being able to support an idea that students have passion about, that also addresses a pressing issue in the world.” 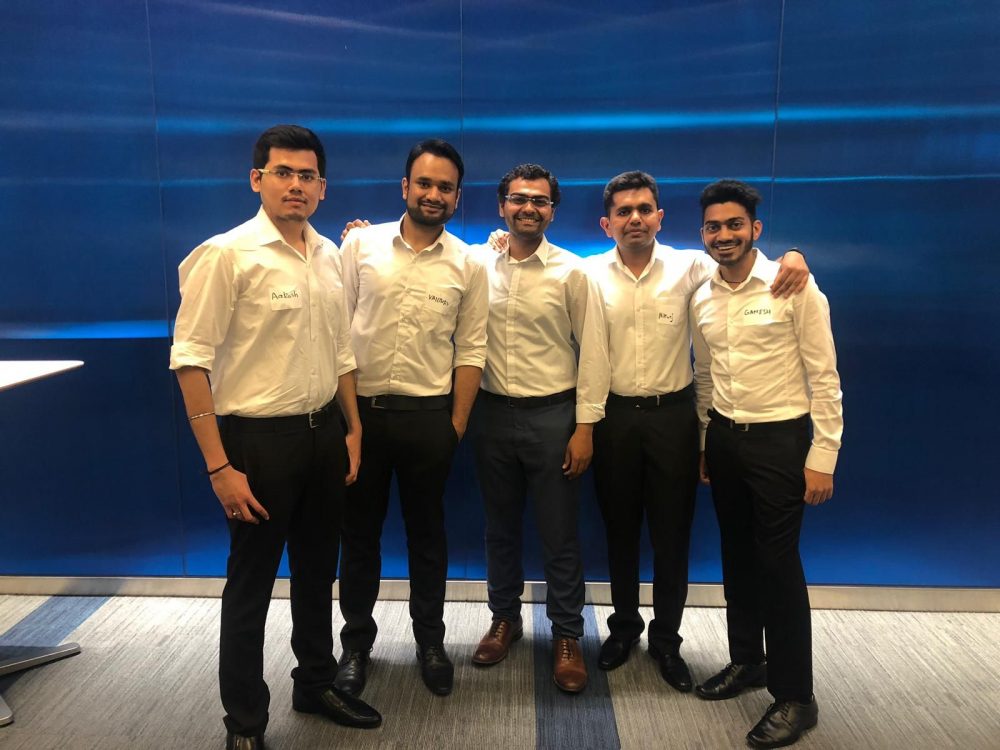 In May 2019, 65 universities from nine countries entered the Klynveld Peat Marwick Goerdeler (KPMG) second annual competition. RoboBin, an invention which addresses the dilemma some people face when discarding items into public recycling containers—in which bin does this belong?— won first prize over 600 applicants. The worldwide competition was designed to develop solutions to problems facing businesses. By looking for ways to eliminate unwanted food from entering landfill sites, RoboBin was created by a team of five students from the University of Toronto (U of T). The invention not only directs food cores/peelings and half-eaten lunches for composting, but also separates recyclables from garbage.

Many Canadians are recycling wrong, and it’s costing us millions was a headline for a CBC article regarding residential blue box recycling (https://www.cbc.ca/news/technology/recycling-contamination-1.4606893). When creating their prototype, the team was mindful of this information and became confident that their invention will help save the city money.

With help from the RoboBin’s artificial intelligence (Al) system, it will become easier for people when tossing pop cans or apple cores into containers with various options. The U of T students claim the invention will reduce the amount of Toronto’s recyclables becoming contaminated.

Nikunj Viramgama, the CEO of Paramount Al, which is the company they created, said, “One in three citizens contaminate their recycling waste— even if you make an educated guess, we go wrong all the time.”

Al, the powered system, uses photos to sort what is deposited. Paramount Al’s CTO, Vaibhav Gupta, says that they uploaded over 35,000 images to train the system to identify the differences among garbage, recyclables, and organics. “So what it is doing is basically analyzing each and every pixel separately and the RoboBin determines the best description for the content.”

When people deposit an object, they push a button. The system then scans the item before mechanically moving it into the correct bin, basically eliminating the user’s guesswork. Viramgama states that they created the prototype to be an accessory to the containers in order to reduce costs. The bins do not have to be replaced.

The KPMG Ideation Challenge judge, Anthony Coops, was convinced the Al concept had good merit and stated, “This team in particular brought to life the business case for their idea by talking about the number of bins at a theme park and the amount of waste that is then generated.”

Viramgama concluded, “We want to save the environment as well as create a business model.” The team is now planning to implement the system in their neighbourhoods to determine whether it is “feasible and scalable” and if so, Paramount Al will approach the City of Toronto.

The project Precious Plastics whose mandate is to process on-site, and RoboBin, an invention to eliminate contamination, are both instrumental in preventing plastic pollution and could be key in dealing with the solution. Until these two systems are fully operational, we need to lessen our dependency on disposable plastics. Working towards this effort, Custom Earth Promos offers a variety of tips and products that we should all be using. Diligent recycling will result in new markets for plastic. As well, reusing what we have on hand should be two achievable goals for the future.

By improving recycling habits and introducing a composting program, students are leading the way towards a healthier planet.

When several students began noticing lunchroom trash bins filling up with recyclables at Douglas Park Elementary School in Regina, Saskatchewan, a Green Team was initiated to begin retrieving them for recycling. Rain or shine, Abby Tetlow, along with other students, remained indoors to gather and rinse out lunchroom recyclables. Abby said that starting the Green Team, whose members soon grew to number 23, was an easy process.

“The students learned that they could take the recycling and put it with the paper recycling, meaning no extra cost to the school.” Nicole Putz, a Grade 4/5 teacher and team supervisor, said, “The idea came from a sustainability unit that is part of the Grade 5 curriculum. Students came with an idea of taking action in their community.” Putz added, “I’m proud of them every day for giving up their afternoon recesses to go around to pick up all the bottles.” Putz also noted the time when students were emptying the recycling bins and the garbage in the staff room. “We teachers were actually surprised to find out that staff were culprits in some of these recycling fails.” Putz laughed, “This moment also helped to educate everybody in the building.”

This student-led crusade also became passionate about improving their classmate’s recycling habits. Regina’s juice boxes, for example, can be returned for a refund, while single-use plastic pudding cups are not recyclable. The team spends approximately twenty minutes rinsing and properly sorting whatever they gather, which in turn helps recycling facilities. When using plastic gloves, students wash them for reuse.

The Green Team has other accomplishments that include a vermicomposter with a goal to sell the nutrient-rich compost to local gardeners to raise money for future environmental initiatives; creating and planting milkweed “seed bombs” that will attract Monarch butterflies; joining the Crayola Marker recycling program; extending schoolyard litter pick-ups into the neighbouring community; offering prizes to students who bring reusable forks and spoons instead of opting for single-use plastic ones; handing out reusable produce bags to employees of local businesses; and working with the Queen City Marathon Green Team in managing both recyclables and organics that are created at the event. In addition, the team has fun creating YouTube videos on recycling and water conservation in order to help educate other students.

Abby concluded, ”I hope that our school will be known to be really eco-friendly and that lots of people are going to remember us starting the Green Team. It will help the Earth for future generations. If everyone did it then it would really make an impact on all of the landfills. Recruiting younger students is also an important initiative because we recognize that after graduating, our legacy and efforts will continue.”

Students at St. Thomas High School’s Comité vert in Montreal reduced their school cafeteria’s trash by launching a zero-waste challenge. Their mission was to divert up to 70% of the material being trashed during its two daily lunch periods.

The green committee idea was formed when teacher Maria Pia Chavez, along with a group of students, attended September’s climate change rally. It was there that 17-year-old Haley Yorston and 15-year-old Simon Vaillant were inspired by Greta Thunberg, the renowned Swedish teenage environmental activist. Yorston said, “The ultimate goal is to do the best we can as a school to create change and get people excited about composting and recycling. We’re optimistic. After two weeks in the cafeteria we’ll reassess and rebuild.”

As Vaillant’s family already composts, he is actually involved in reducing the waste stream first-hand by diverting household organics at home. “And then I would come to school and see 20 garbage cans in the cafeteria,” he said. “The biggest obstacle will be the general laziness of the student population. It’s a big change. It’s really important for our generation to take on the responsibility to bring about change. We need to take on the simple act of allowing an apple core to decompose naturally in a compost heap and not toss it into the garbage.”

By encouraging less wasteful habits, the team began with an advertising campaign approach. Leading up to the launch, they spent weeks making daily announcements over the PA system. Posters and buttons were created. They visited classes to offer presentations and request students to bring reusable containers and cutlery. As well, the team devised a supervisor’s schedule to direct students to the appropriate bins. Provided with compostable brown paper bags to gather all unwanted organics including serviettes along with mandatory recycling, the team visualizes a huge reduction in waste.

“It doesn’t matter if we’re not perfect the first day,” Maria Pia Chavez explained. “What we need is the bins in place and manpower on the floor.”

Assistant principal Sue Larivière, who reinforces the necessity to ensure that the program remains on track, states, “We need to encourage good habits from all of our students. We’re reducing the number of garbage cans from 20 to 5. That’s exciting! We are working hard to make a difference.”

Other West Island schools in the Lester B. Pearson School Board are also installing green initiatives. These include the John Rennie High School and eleven elementary schools that have introduced a variety of composting programs. West Island College, a private school, has reduced its waste by composting and reusing bowls and spoons.

In order to see habits change towards a more sustainable working environment, the students that are implementing the program need the entire student body, facility, clerical and custodian staff, as well as parents, to become involved.

Chavez and her committee members are passionate about reducing waste. “These kids are committed,” she said. “And it’s not just about the environment, they are politically invested. This is just the beginning.”

Phenomenon-Based Learning: A Look at How Finland Teaches Skills for the Future