Schools, like other institutions, are increasingly concerned with social inequities and what they might do to lessen them. Curriculum changes seek to redress past unfairness to marginalized groups, and some commentators have put the entire female half of the human race into that category. We are led thereby to assume that women in the past were silenced and excluded from public life, but in fact, whether they openly battled prejudice or not, women were central. That too few students know of their achievements in the sciences, arts, scholarship, social advocacy, and politics seems like a retroactive form of misogyny. It is our ignorance of their work, not their lack of participation or accomplishment, that has marginalized them.

Generalizations of course have their limits, and what happened to one person is not necessarily what happened to another. Yet it benefits no one to concentrate on historic sexist barriers against women while we ignore the world-changing effects their work has actually had. It’s understandable that outrage would colour the desire to redress unfairness, but might female students not be more empowered by learning about their fore-mothers’ achievements than by hearing a victim narrative?

Although girls today are taught that they have superior opportunities compared to their predecessors, in fact, the great female writers, scholars, scientists, and activists born into the financially comfortable classes had educations of a quality which few girls receive today: they spoke several languages, played several musical instruments, learned to paint a decent watercolour and identify botanical specimens. They travelled the world visiting its museums, writing literary diaries and letters to the intellectuals of their day. “The intellectuals” included 17th, 18th and 19th century British, North American and European female writers, such as Margaret Cavendish and Mary Somerville (scientists); Joanna Baillie, Elizabeth Gaskell, Marie Vignee-Lebrun (writers and artists); Emilie du Chatelet (scholar-partner of Voltaire); Christina, Queen of Sweden (shaper of Europe’s 17th century arts landscape). 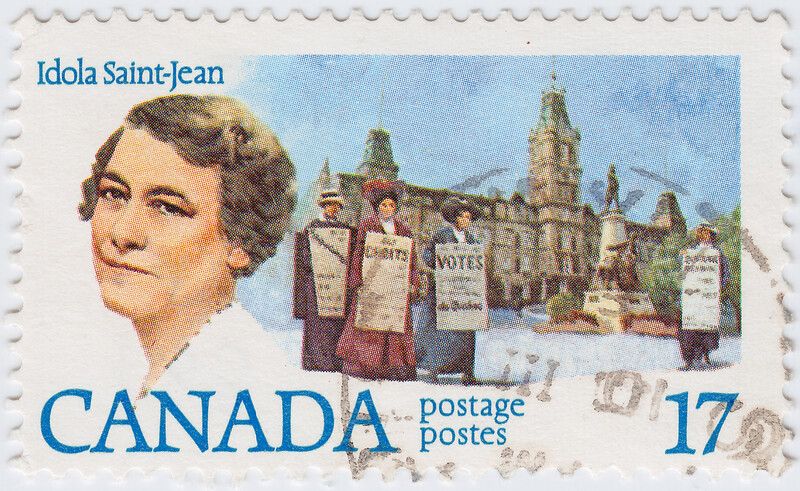 How many know the names of great female portraitists of the Renaissance and the still-life painters of the Baroque era? Who knows of Medieval composers such as Hildegard of Bingen who in about 1151 wrote what is thought to be the first morality play (sacred musical drama), “OrdoVirtutem,” and Isobella Leonarda (1620 – 1704) who lived in an Ursuline convent from age sixteen until she died at eighty-four and was well-known for her compositions? Also famous were Barbara Strozzi and Francesca Caccini, contemporaries of Byrd, Tallis, Monteverdi, and Palestrina, whose names are familiar today even among non-listeners, while Strozzi’s and Caccini’s are not.

Who knows which woman’s laboratory discovered nuclear fission (Lise Meitner), which woman made the discovery of the shape of DNA possible (Rosalind Franklin), and who was the first person to receive the label
“scientist” (Mary Somerville)?

Today’s students may be unaware that the three social movements which shaped the world they’ve grown up in—the civil rights, feminist and environmental movements—were all triggered by books written by three particular women. These were not, of course, the only figures behind these movements; many other women did as much for civil rights and conservation—but anonymously. As did many men, anonymously. Their names too are lost to history, and they too are, in that sense, marginalized.

Even names not lost to history are often not heard in classrooms, however. Do students learn, for instance, which woman founded Kew Gardens, now the Millennium Seed Bank (Queen Augusta), or Britain’s National Trust and the Social Work profession (Octavio Hill), or modern hospital administration (Florence Nightingale)? Would students know of the female aeronautical engineer responsible for the Hawker Hurricane bombers which were Canada’s contribution to the war against Hitler (Elsie MacGill)?

The works of millions of women who produced great novels, poetry, music, theology, and scholarship may be a specialty interest for experts, as are those of their male coevals, but it seems a strange educational gap that today’s female students know so little of the women who literally made their world.

We live in a historical, going-forward time, but we do a disservice to students when we gloss over the past, ignoring the nuts and bolts of how we got to where we are. That this entails glossing over the achievements of female geniuses seems an unfortunate irony, in an age when we say we want equality between genders. Mainstream publishers have produced an increase in titles about women formerly left in obscurity, but it would be helpful if this body of knowledge were incorporated into the History curriculum. “History” is now often dismantled into separate areas of “ethnic studies,” “gender studies,” and so on. This may contribute to an unintended deterioration in general knowledge.

Certainly, the message that they are the first generation to be “free,” and that they have no heritage of female accomplishment to look back at and be inspired by, is not doing today’s female students any favours. To delve into the works of great female authors may be not only inspiring but also a bulwark against the short attention span attendant on the “click and swipe” method of reading. The educated woman of the past carried around a compendium of knowledge in her head; she had no Google to outsource her mind to. It seems an insult not to acknowledge that and to dismiss her well-furnished mind as “marginalized.” Perhaps in our own time the habit of sustained reading, of sustained mental effort, is itself too often marginalized by schools.

School librarians as well as teachers, of course, have a role here, if they can find in their budgets the means to purchase books written by or about the female giants of history. Students can find these women on any number of online sites, but there’s nothing like going to original sources to reclaim the “marginalized.” How helpful it would be if classrooms and libraries offered autobiographies by Florence Nightingale, theologian Elizabeth Cady Stanton and artist/salon hostess Marie Vigee-Lebrun, and collected letters of Mary Worley Montague and Octavia Hill, and travel journals by Mary Kingsley (explorer of Africa) and Gertrude Bell (Middle East traveller and colonial administrator of the post-World War I country of Iraq).

By learning what women of past centuries had to say themselves about their lives and times, students get a different impression of the roles they played. They discover that these women were very busy—creating our world.

S. B. Julian
S. B. Julian, BA (History), MLS (Library and Information Science), is a past librarian and school library assistant, and present writer, memoirs coach, and author of Women Who Made the World, Ninshu Press/Overleaf Books, 2018.

Into the Prairies: Grassland Biomes