Aware of my passion for books, a friend recently handed me a newspaper article that he knew would intrigue me. The article described The Lost Words by British author Robert Macfarlane and illustrator Jackie Morris. A bestselling book in Britain and Europe (called a “cultural phenomenon” by the Guardian newspaper), it had recently been published in Canada. 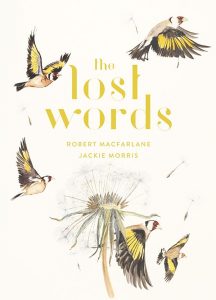 A large (27 cm by 37 cm) and lavishly illustrated book, The Lost Words was created in response to a number of words relating to the natural world being deleted from the 2007 edition of the Oxford Junior Dictionary for schoolchildren. Acorn, dandelion, fern, heron, newt, and kingfisher were among the words that were no longer being used often enough by children to justify their inclusion. They were replaced by other words such as voice-mail, blog, and bullet-point.

Within a few days I managed to acquire a copy of the book, and it certainly did not disappoint! Six pages are dedicated to each of the twenty “lost words” that are included in the book. These pages are sprinkled with letter puzzles to decode, predictions to make, magic spells to read aloud, as well as lovely watercolour and gold leaf illustrations to look at.

A celebration of the complexity and importance of the natural world, this book would be a great addition to school libraries and classrooms.

Note: A free “Explorer’s Guide to the “Lost Words” can be downloaded from johnmuirtrust.org/initiatives/the-lost-words.

The deletion of these words from this popular classroom dictionary has raised a number of questions for parents and teachers. Are children spending less time in contact with the natural world? Are the lost words another indicator of the accelerated loss of biodiversity that we are currently experiencing?

After reading the book I decided to update myself on the present state of biodiversity and turned to the 2018 Living Planet Report for information. Published every two years by the World Wildlife Fund for Nature in collaboration with the Zoological Society of London, collected data is used to measure the status of 16,704 populations of 4,005 vertebrate species. Here are just a few of the facts that I uncovered:

• The largest decline has been found in freshwater species of fish.

• Habitat loss and degradation has been identified as one of the most significant causes for the decline in biodiversity. For example, almost 20% of the Amazon rainforest has disappeared in the last 50 years.

As I was searching through some background information on policies intended to support conservation efforts over the last 50 years, I came across a number of international treaties (e.g., The United Nations Convention on Biological Diversity-1992). There were also many documented initiatives by federal, provincial, and municipal governments as well as conservation groups (e.g., a wildlife crossing structure on the Trans- Canada Highway in Banff National Park). During my reading, one term that kept recurring was rewilding.

Numerous rewilding projects have been initiated around the world including the Yellowstone to Yukon Conservation Initiative and the European Green Belt. The core concepts that all of these projects share are:

• to provide connections between the areas

• to reintroduce and/or protect keystone species

• to limit human control over the protected ecosystems

If you are looking for information on conservation projects or rewilding initiatives, or just some simple ways to engage your students in the natural world, the following resources might prove helpful. 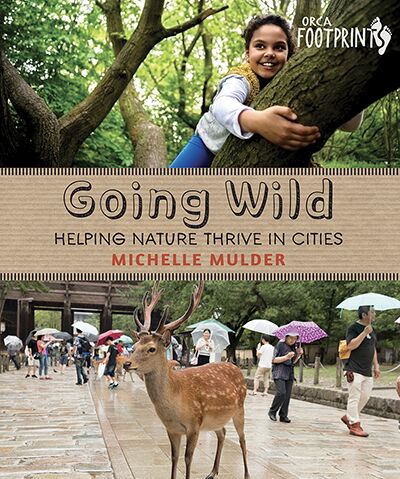 This informative and well-illustrated book describes the development of cities over the last 6,000 years and explains the impact they have had on the environment. Examples are given of rewilding projects that are changing the landscapes of heavily polluted industrial areas. Complex issues such as depaving creek beds, and simpler projects such as planting wildflower seeds in balcony planters, are described.

In this book, rewilding is described as an important and viable strategy for restoring ecosystems to their natural state. Examples from around the world are given of endangered species being successfully returned to their natural habitats. Clearly written and well organized, this book would make a good resource for elementary school classrooms. 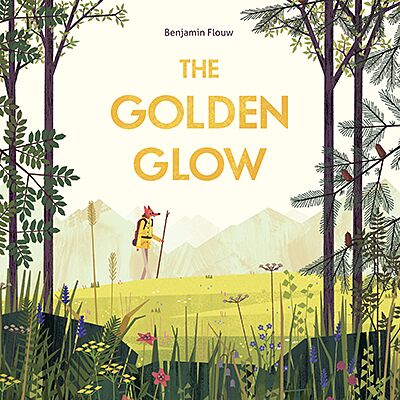 This colourful picture book describes the adventures of a nature-loving fox who sets out on a hike into the mountains to locate the golden glow—a rare plant specimen—to add to his collection. On locating the flower he changes his mind and instead of picking it, he sketches it in detail. He happily returns home to put the sketches in his botany book. With several pages of labelled scientific diagrams and drawings, this book is a lovely celebration of the natural world. 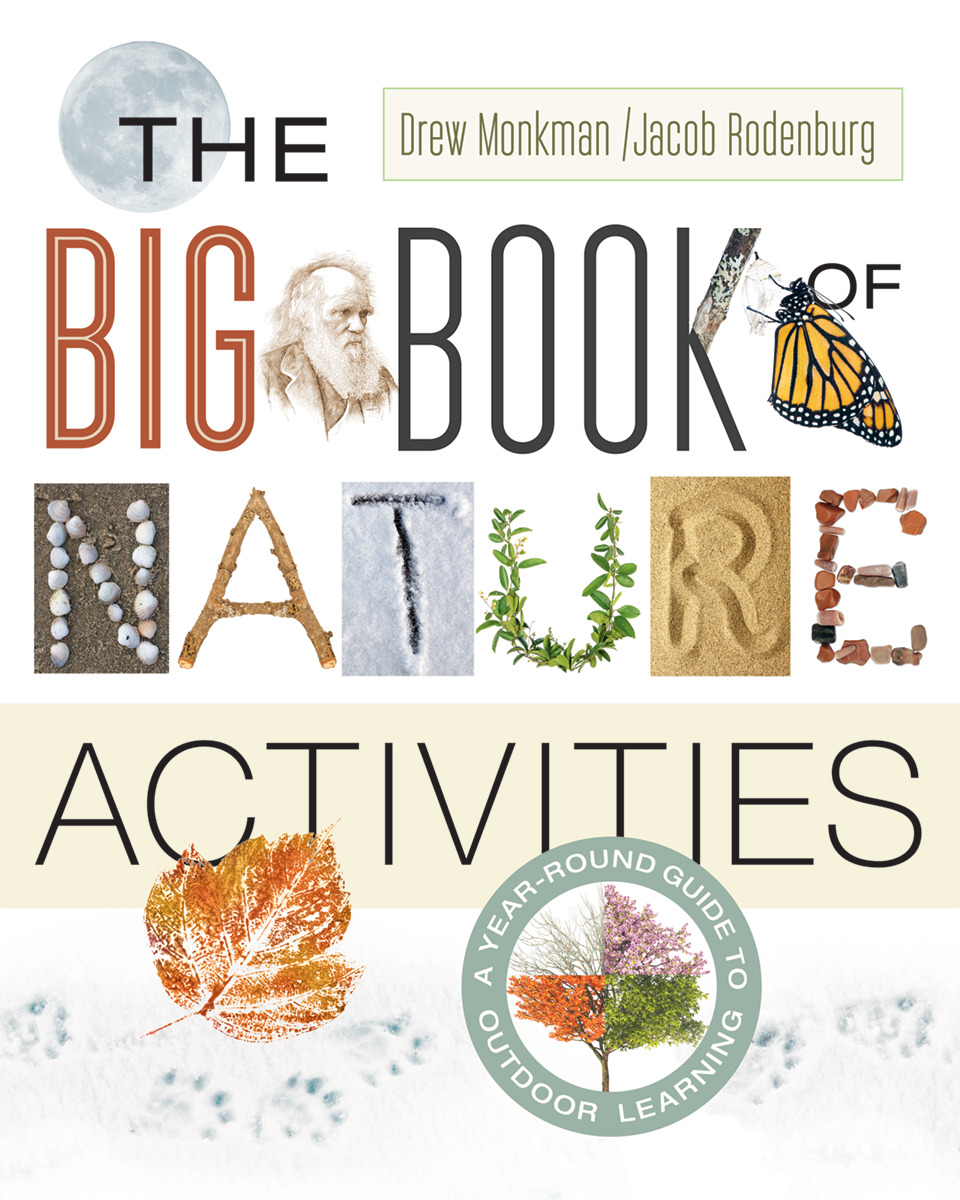 The Big Book of Nature Activities

This book is a resource guide for teachers and anyone else who wants to engage children in nature-based activities. Organized around seasonal change, each chapter offers a continent-wide overview of seasonal events (timing depending on latitude, elevation, climate, etc.), nature highlights by region, a poem, challenges, art ideas, a story, and a multitude of activities.

Other Titles of Note

Note: This lesson plan is taken from the Endangered Animals Teacher’s Guide which is available from PacificEdgePublishing.com.

Goal: To engage students in an accessible conservation activity.

Step 1: Discuss the following information with your students: the destruction of habitat and the shrinking of food sources are some of the major causes of the accelerated rate of extinction amongst birds.

Step 2: Brainstorm a list of birds that live in the area around your school. Record the list on chart paper.

Step 3: Research a list of food sources required by these birds. Discuss how people can protect the food sources.

Step 4: Have each student tie a piece of twine around the stem of a cone.

Step 5: Have the students spread peanut butter or lard between the woody sections of their cones.

Step 6: Have the student roll their cones in birdseed so that the seeds coat the cone.

Optional: You could watch and record the birds that come to the feeders and submit the information to Project FeederWatch, an initiative of Bird Studies Canada (birdscanada.org).

This article is from Canadian Teacher Magazine’s Spring 2020 issue.

A Worm Bin in a Classroom

The Extra Mile: A Mini Bio of Colin...

How Do We Teach The Heart?