The True Tale of a Giantess: The Story of Anna Swan 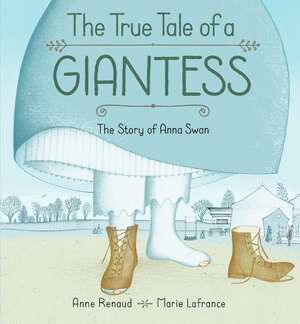 The True Tale of a Giantess
The Story of Anna Swan

This enchanting story is based on the life of a Nova Scotian girl, Anna Swan. The story is written as if Anna is telling the story of how she was born large and how she became “tremendous” as she aged. She compares herself to her environment on her family farm with such things as the plants, bales of hay and animals. Anna became a celebrity at a young age when her family took her to county fairs to show her off. She tells of the problems she faced growing up, such as having to try to fold herself up on furniture and not having clothing that would fit. Later, Phineas Taylor Barnum invited Anna to join his Gallery of Wonders in his museum in New York. The story continues to follow Anna’s life as she moves to New York. Anna tells of traveling to England to have tea with the Queen and meeting her husband Martin Van Buren Bates. The couple traveled together as the Tallest Married Couple on Earth. After tiring of touring, the couple settled in Seville, Ohio in a home that was specially built to fit them and their friends.

In the author’s note, the reader learns that this story is based on an actual person. More detailed facts about Anna and her life are shared. The photographs in the notes add to the reader’s understanding of her large size.

Classroom Connections: This story lends itself well to discussions about trying to fit in and how people feel when they may be different than others around them. A good lesson could be developed around looking at the problems and challenges Anna faced and how she turned them into opportunities. Students could research more about this famous Nova Scotian using Anne Renaud’s list of sources for writing this book.

100 Things You Don’t Know About Atlantic Canada (for Kids)

The Art of Inquiry: Questioning Strategies for K-6...

A Stranger at Home

Over at the Rink