Savvy teachers have long used money to make Math lessons more practical and engaging. Could you also use cash to teach other subject areas? What about incorporating Canadian currency as a provocative tool to teach History, Politics, Chemistry, Physics, Law, Art or Civics!

A wallet full of bills offers more than mere purchasing power. Naturally, money allows for practical calculations in Math class or ledger work in Accounting or Economics. However, what is on the surfaces and what goes into the substances offer unsuspected deep learning and cross-curricular lessons. Our Canadian currency can be a creative teaching tool.

Canadian history textbooks outline the political development of the BNA Act, the Statute of Westminster, and the repatriation of our Constitution. The evolution of our currency also illustrates the development of our sovereignty.

In 1934, the Bank of Canada was chartered by an Act of Parliament. Initially, it was a privately owned corporation to avoid party politics, but in 1938 it was designated a federal Crown Corporation. The preamble to the Act revealed its role “to regulate credit and currency in the best interests of the nation.”

Now, the Bank of Canada formulates monetary policy—in particular, a low and slow rate of inflation. It is the central bank for the federal government and the sole issuer of Canadian bank notes. The previous Dominion of Canada bank notes were withdrawn from circulation between 1935 and 1950 (the Royal Canadian Mint issues our coins).

Did you know that when the Bank of Canada issued its first series of bank notes in 1935, they produced separate English and French bills for each denomination? That fact is always a great hook to start a lesson. The reigning monarch and members of the British royal family were the faces on the front of the early bills. They provide a visual review of the history and politics of the day.

Cash was king throughout the 1900s. Today, electronic trade and transfers run domestic and global economies. Currently, Canadians who still use cash have the choice of five standard bank notes: the blue $5 bill with the face of Wilfred Laurier, the purple $10 bill with John A. MacDonald, the green $20 bill with Queen Elizabeth II, the red $50 bill with William Lyon MacKenzie King, and the brown $100 bill with Robert Borden on the front. 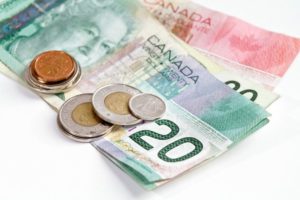 Compared to other nations, Canada has a very limited range of bills and denominations. A class survey of global currencies can produce numerous points of comparison. In our multicultural classrooms, this also allows for personal connections and explanations.

You can link History and Economics and pique student interest by studying the denominations first printed by the Bank of Canada. For example, to commemorate the silver jubilee of King George V in 1935, they issued a unique purple $25 bill and an orange $500 bill. Those denominations have never been used in Canada since, which makes them collector items. The Bank of Canada continues to design and print commemorative bank notes for notable occasions. Has anyone in your class seen the limited edition $10 bill marking Canada’s 150th?

Our different currency denominations—and the trends, abuse or prohibition of certain bills—can illuminate public and corporate practices, purchasing power and financial trends. Have your students examine the decommissioning of Canada’s $1 bill in 1989, for the less costly, more durable “loonie” coin. In 1996, the “twoonie” similarly replaced the $2 bill. How has retail business changed? Who still gets paid in cash?

Canada’s largest, but least used, denomination was the $1000 bill. Ever seen one of those? As mainstream society became more corporate and technological, as wages were paid electronically, and as large-ticket items were purchased with credit or debit cards, the purple-pink $1000 bills were seen less and less. Another reason for their scarcity involves crime.

Thousand dollar bank notes allow for large amounts to be carried, saved or transferred discreetly. Nicknamed “pinkies” by banks, the RCMP and on the street, the $1000 bill became the bank note favoured by organized crime. They routinely appear when police bust narcotics or organized crime rings.

The Bank of Canada halted printing in 2000, but well over 900,000 remain at-large. That’s nearly one billion dollars in outstanding currency! Stores no longer honour these bills, but commercial banks will. Once taken out of circulation, the $1000 bills are destroyed.

Counterfeiting is another legal issue that can bring currency into a classroom. The Currency Act and the Criminal Code of Canada clearly state that it is illegal to deface or destroy Canadian currency. Creating false copies is obviously illegal too. In the battle to prevent counterfeiting, science and tech play an integral role.

The Bank of Canada employs chemists, physicists, artists and engineers to develop our modern bills. In fact, our paper money is no longer made of paper. Since 2012 and the Frontier Series of bank notes, our money is made of multi-layered polymer.

Polymer bills have a glossy, slippery feel. They are more durable and extend the previous lifespan of bills in circulation from three to seven years. Scientists even test their limits by boiling, freezing and washing them. Each bill is designed to be uniform in dimensions, weighs about one gram, and costs nineteen cents to produce. Chemically, polymer bills can be recycled, whereas old paper bills were destroyed.

Canada’s polymer bills also incorporate a myriad of tactile and security features. Have your students look for raised ink on words like The Bank of Canada or on the shoulders of the image of the Queen. Examine the microprinting and holographic 3-D images. There are also watermarks, embedded thread, and random white security fibres that glow red when exposed to ultraviolet light. Metallic portraits and symbols, transparent areas, and colour-change technology are built into these bills. Your students can learn how to test for counterfeits on the Bank of Canada’s website.

Our bilingual, multicoloured bank notes feature the Queen and notable Canadian Prime Ministers on the fronts. Artwork that highlights Canada’s military history, culture, achievements, natural flora and fauna claims the other side. There have been six successive series of bank notes since 1935, with detail and designs worthy of gallery exhibition. What new bills would your students design?

Just as the Bank of Canada has changed the substance and security features of our bank notes, they also routinely change what is on the surface. How they choose to do that is an excellent Civics lesson.

For the first time in history, the Bank of Canada initiated an online campaign, inviting citizens to submit names of iconic Canadian women (citizens renowned for leadership or significance, dead for at least 25 years) for a newly designed $10 bank note. The list narrowed from thousands, to hundreds, and eventually to the selection of Viola Desmond.

Viola Desmond was a black Canadian businesswoman from Nova Scotia who struggled against racism and injustice. She is sometimes referred to as “Canada’s Rosa Parks.” Desmond stood up against segregation in society at a New Glasgow movie theatre in 1946 nearly ten years before Rosa Parks took her stand in the US.

Hers will be the first Canadian, female face on our currency, making her a role model for others and highlighting the ideals of our nation. This new $10 bill is due in circulation by late 2018. A second public survey and selection process is planned to identify another iconic Canadian to be featured on a redesigned $5 bill, expected in 2020.

Of course, change always brings questions. If the Bank of Canada removes Prime Ministers Laurier and MacDonald from the $5 and $10 bills, will they be eliminated from our money altogether? The answer is no. Instead, the $50 and $100 bills will drop the images of MacKenzie King and Borden and become the new positions to honour Canada’s first Prime Minister and first French Prime Minister.

The future of Canada’s bank notes is preparing for dramatic change on the surface. The substance of our bills has already changed. Our money reveals national priorities, history and technology. Much more than mere promissory notes to pay, it can be used to teach a myriad of lessons.

An original, commemorative $25 bill from 1935 can fetch $2000 as a collectible—or you could deposit it as $25 into a bank account. It is still money—but it is so much more. The symbols and faces on our currency (past, present and future) read as a mini-text of Canadian history and achievements. The features built into the bank notes apply our best science and technology.

This year, challenge your students and use Canadian cash as a way to explore and connect History, Economics, Chemistry, Physics, Law, Art and Civics! Your wallet has never been so valuable.

Maria Campbell
Maria Campbell is an Ottawa-based high school teacher (OCT certified 1991). She is also a wife, a parent, an avid traveller and writer.

Living and Working in China

Rousing Curiosity in Math with a 125 Year...