In many countries, the allure of ideologies promoting nationalism, isolationism and populism seems to be on the rise. Increasingly, fervent narratives concerning the desperate need for border walls, counterterrorism and the scapegoating of minorities tend to dominate a significant number of popular news outlets. International tensions and suspicions run high, and one of the likely casualties of this emerging mindset is international collaboration in education.

Recently, some school boards across Canada have prohibited students from travelling to the U.S. and overseas due to security and legal concerns. Several Canadian school divisions have hastily created policies barring teachers from international conferences. I understand that there may be some excellent arguments why these decisions were made. For example, it may be a legitimate concern that some Canadian schoolchildren might be unable to enter certain countries due to the place of their birth. Elected school board officials may worry about the optics of funding Winnipeg teachers who ask to travel to Hawaii for professional development in February. Still, the timing of these policies also represents insular thinking. This is regrettable, especially when one considers the many geopolitical crises that we currently face and the genuine need for transnational cooperation. As school systems suppress international opportunities for shared understanding, gaps between nations run the risk of getting wider.

In 1925, British author Virginia Woolf wrote the short essay “The Russian Point of View” to describe the inevitable tragedy of losing critical meaning in literature due to gaps in language and culture. Woolf (2015) acknowledged the unfortunate reality that “the mind takes its bias from the place of its birth, and no doubt, when it strikes upon a literature so alien as the Russian, flies off at a tangent far from the truth.” She posited that these differences in flight patterns distanced nations even further from one another. Yet despite enormous disparities in language and culture between British and Russian audiences, Woolf marvelled at the remarkable influence of Russian writer Leo Tolstoy. Woolf exclaimed of Tolstoy’s work, “Even in translation we feel that we have been set on a mountain-top and had a telescope put into our hands. Everything is astonishingly clear and absolutely sharp.”

In December 2015, University of Manitoba Professor Dr. Donald Fuchs arranged for University of Manitoba Professor Dr. Rick Freeze and me to teach 130 university students, professors and officials about Canadian educational perspectives at the North Caucasus Federal University (NCFU) in Stavropol, Russia. Translating from English to Russian always proved to be an interesting (and sometimes less than accurate) endeavour, but there were three specific moments in which actions and insights from our hosts transcended all language, cultural and political barriers. These three individuals—Alexandra (Sasha) Timoshenko, Maria Kolokolnikova and Dr. Valery Shapovalov—provided me with “telescope from a mountain-top” experiences. In short, they were my Leo Tolstoys. 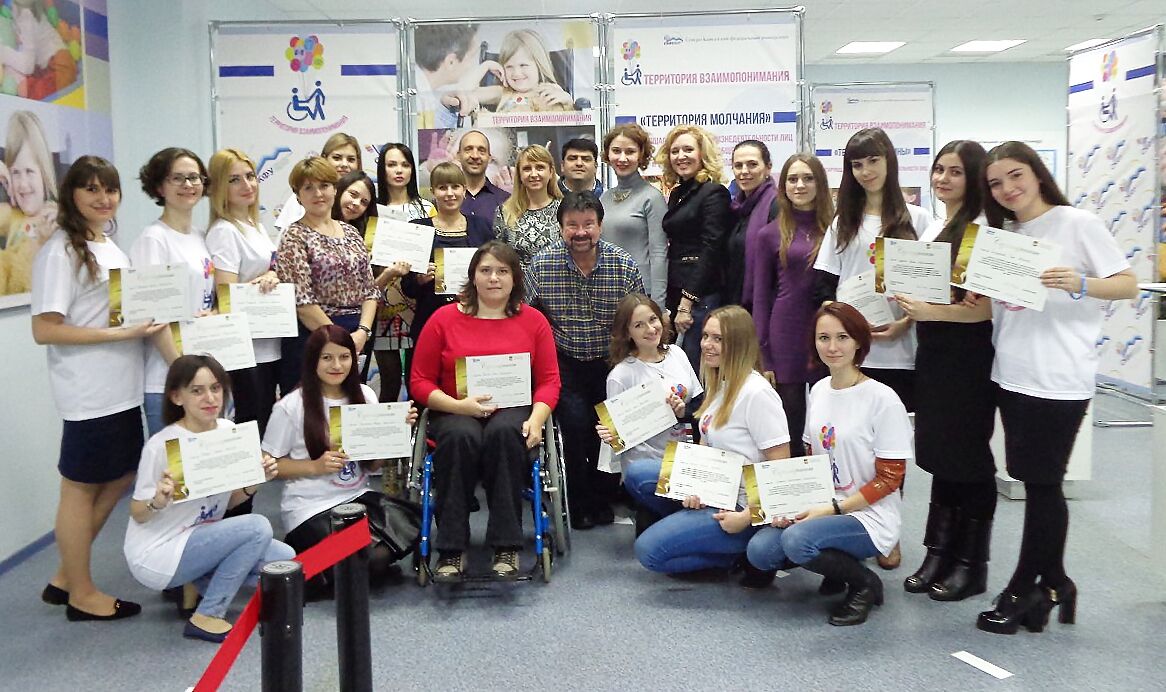 The author (back row, eleventh from the left) and University of Manitoba professor Rick Freeze (front row, middle of photo) visiting the Territory of Mutual Understanding with NCFU professors and students in Stavropol, Russia.

Alexandra (Sasha) Timoshenko was a fourth year NCFU student. She often accompanied us in the morning from our hotel to the university campus. Her kind-hearted smile and gracious hospitality had quickly made both of us appreciate her company.

On the fourth day of lecturing at NCFU, Dr. Freeze and I asked the Russian students, “What will the Russian education system look like in 20 years?” After students had some time to work in groups and formulate some ideas, we began the process of drawing their visions. As Dr. Freeze asked each group leader to speak, I illustrated visual representations of their depictions on a giant piece of paper. Sasha was one of the first group leaders to speak.

Sasha spoke in Russian while I awkwardly drew what was being translated to me. After a few moments, Sasha quietly walked to the front of the lecture hall, smiled politely, and firmly seized the markers from my hands. As she spoke, she simultaneously sketched the group’s vision. Once Sasha concluded her report, she respectfully insisted on drawing the remaining group responses. Unlike my fumbled attempts, her drawings were much more rich, detailed and authentic.

Sasha provided me with my first grand “telescope from a mountain-top” experience. With this one silent autonomous act of removing the markers from my hands, she made it abundantly clear that while the students greatly appreciated their two guest Canadian lecturers, the vision of their country’s educational future needed to be an entirely Russian endeavour.

One evening we visited a facility called the “Territory of Mutual Understanding.” This interactive simulation environment site was created by Ph.D. candidate Maria Kolokolnikova, and made it possible for people to temporarily experience multiple disability conditions. We momentarily experienced navigating our world without vision or hearing. We moved through an obstacle course in a wheelchair and attempted to untie objects with limited fine motor skills. The site was magnificent in terms of physical size, and required the services of many young and enthusiastic student volunteers. While each simulation was in itself a worthwhile experience, I was most impressed by the energy and passion of the twenty highly engaged future teachers.

Observing Maria’s brilliant project in action provided me with my second grand “telescope from a mountain-top” experience. Maria provided an astounding forum for young future educators to showcase their excitement and hope to create a more empathetic, compassionate and inclusive education system. It was clear to me what Maria was trying to express, and she did not need to utter one word to me in English for me to hear her message.

On our last day in Stavropol, Dr. Freeze and I were given tours of two local schools. Later that evening, NCFU Director Dr. Valery Shapovalov invited Dr. Freeze and me to a restaurant for a dinner of local dishes and ice cold vodka. We were joined by several other faculty members and a translator. This was my favourite evening of our trip.

Dr. Shapovalov asked Dr. Freeze and me to share our impressions of the schools we had visited and any lessons we observed. While both schools seemed to be in some need of repair, we collectively expressed our amazement at the many impressive examples of folk dancing, singing, foods and artwork within each school. We also spoke of the remarkable grade two “snowflake” lesson we observed. While we could not help but notice the old chairs and desks, and the worn flooring, the lesson we observed was astonishing. This teacher ingeniously blended her art instruction with high-level mathematics, science and language arts. As the young children pulled out their geometry sets and began to work individually on their snowflakes, classical music streamed through the classroom.

Dr. Shapovalov sadly acknowledged that many Russian schools were in poor physical condition. He then shared a story about a time he visited a public school in North America. While the architecture was beautiful and the technology within the classrooms was astonishing, he found the instruction of a high school physics class he observed to be of poor quality. Even relatively simple concepts that the teacher introduced seemed to be beyond the reach of the majority of students. Dr. Shapovalov then eloquently shared the following.

“Our schools in Russia may be old and deteriorating, but our lessons are beautiful. Here I was in this beautiful classroom in a marvelous school, and listening to substandard instruction. In this American school they have a golden birdcage, but a plain bird lives inside. In Russia our birdcage is rusted and bent, but our bird is golden.”

Listening to Dr. Shapovalov’s poignant narrative provided me with my third grand “telescope from a mountain-top” experience. He clearly wanted to share how proud he was of Stavropol schools, even if the buildings were not as aesthetically pleasing as schools in the West. His powerful message that evening challenged me in my previous role as a school principal, and continues to inspire me in my current role as assistant professor at the University of Winnipeg.

I am very grateful for the teachings of Sasha Timoshenko, Maria Kolokolnikova and Dr. Valery Shapovalov. They let it be known that the people of Russia are filled with great pride, excitement and hope. I can’t help but love and cheer for people possessing these qualities, no matter where they were born and what language they speak. Like Tolstoy, their messages were brilliantly articulate and abundantly clear.

I hope that we provided all of our new Russian friends with similar “telescope” experiences throughout the week. I hope that our overarching messages about inclusion, equity and cooperation came through, despite our inability to speak the Russian language and our Canadian perspectives. I hope that even though we seem to live in a time of ever-rising sociopolitical fears and suspicions, educators from around the world can have opportunities to connect for the collective purpose of mutual understanding and progress. We need to open our birdcages. It is nice to think that together, we could all create a symbiotic “telescope from a mountain-top” experience for each other. And when we gaze through its lens, we see our golden birds soaring together.

References
Woolf, V. (2015). The Russian Point of View. In The Common Reader. Retrieved from https://ebooks.adelaide.edu.au/w/woolf/virginia/w91c/chapter16.html.

Kenneth Reimer
Kenneth Reimer is an Assistant Professor at the University of Winnipeg. Prior to this, he had a twenty-five-year career in Canada’s public school system as a mainstream, special education and resource teacher, guidance counsellor, and school principal. Dr. Reimer holds a Ph.D. in Education from the University of Manitoba. His primary research interests are on inclusive special education, school leadership, creativity, educational policy, graduation rates, at-risk learners and teacher collaboration. He has served as President of the Manitoba Council for Exceptional Children. Dr. Reimer has taught at the University of Winnipeg, University of Manitoba, and North-Caucasus Federal University (Russia). He has presented papers at several provincial, national and international conference sites.