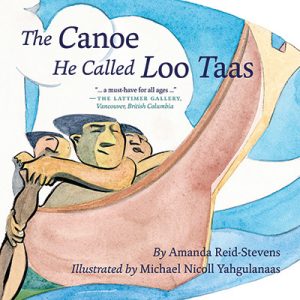 Just over three decades ago Bill Reid crafted a 50 foot Haida canoe for Expo ’86 in Vancouver. This hardcover work is about that craft, starting with its creation from a single massive red cedar to its later adventures that included a trip to France. The text is a product of Reid’s daughter and the writing is wonderfully accompanied by whimsical illustrations.

Classroom Connections: Loo Taas means “Wave Eater” in the Haida language and the story of the canoe is offered first in rhyme over 18 pages of text and drawings, and then explained more fully in a narrative afterword. For those reasons, I suspect this book actually has a broad range of potential readers. Younger readers will certainly love the first part of the work, while older students could use the afterword as a research tool for information on Haida Gwai, or even as a springboard to explore the importance of traditional transportation amongst other First Nation, Métis or Inuit peoples.

Journey to Literacy: No Worksheets Required