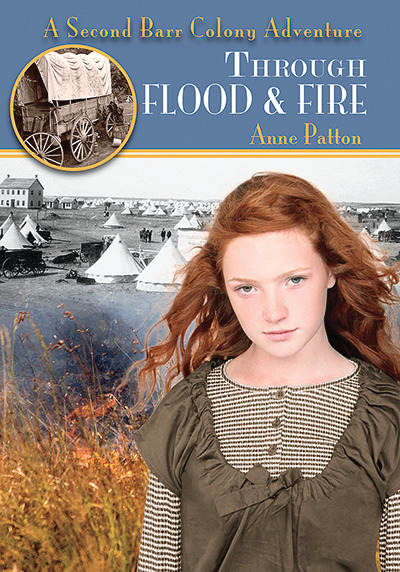 In 2011 I read and reviewed the first Barr Colony Adventure: Full Steam to Canada. This sequel is even more thrilling! Dorothy (Dodie) Bolton and her family travel by wagon from Saskatoon to the Barr Colony from April to June 1903. The family faces everything from scarlet fever to spring floods, separation from each other, injured limbs, snow, broken bridges and a forest fire. Barr’s promises of an English settlement with shops, a church, and schools turn out not to be true and the Boltons pass many colonists who are headed back to Saskatoon (and possibly even home to England). It’s no easy journey and the Boltons wouldn’t have made it without the help of the Sutton family (who were on the same steamship), Mr. Snow (the Government man), and a Métis man named Baptiste Parenteau. Through it all, Dodie and her sister Lydia show grit and rise to the challenges of camping in a canvas tent, sleeping on pallets with straw mattresses, baking bread in a camp stove, driving horses, and cutting wood, all while trying to adhere to their mother’s English expectations of ladylike behaviour. The author’s bio notes that she is working on a third and final Barr Colony book. Considering the quality of the first two novels, I’m eagerly awaiting its release!

Classroom Connections: Buy a class set for a novel study or ten for a literature circle. The plot moves quickly, the author includes illustrations, and the characters whisk you along 300 exciting kilometres through “the northwest territories,” now known as Saskatchewan. The book can also support the History curriculum: Colonization of Canada/Settling Western Canada; Pioneer Life; Women’s Roles at the Turn of the Century; Family Dynamics in the early 1900s, Settler/Native relations. Reading Comprehension Strategies: Asking Questions, Making Connections, Visualizing.

This review is from Canadian Teacher Magazine’s Sept/Oct 2016 issue.

“From the Mountains to the Sea” Series

The Secret of Zoone