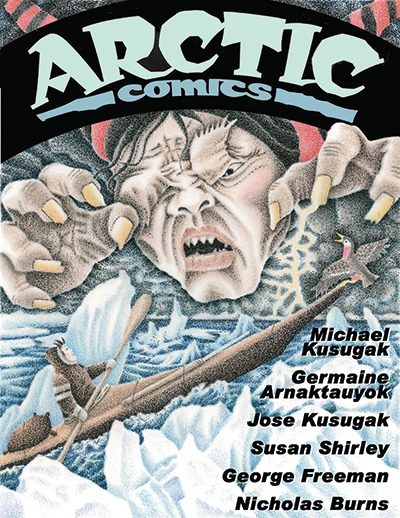 This beautifully illustrated comics anthology presents five diverse tales that illuminate the rich tapestry of Inuit and Northern indigenous past, present and future culture. Nicholas Burns, the editor, describes the book as a cross between a “European-style” comics album and North American comics written and drawn by Inuit writers and artists. Michael Kusugak wrote “On Waiting,” an insightful poem about life, adapted into a graphic representation illustrated by Susan Thurstan Shirley. Jose Kusugak tells of one of the origin stories of Kiviuq described as the original man in a Keewatin tale from the Northwest Territories in “Kiviuq Meets Big Bee” illustrated by Germaine Arnaktauyok. “Blizzard House” is a story about future energy options for the north written by Nicholas Burns and illustrated by George Freeman. Nicholas Burns also penned and illustrated “The Great Slo-Pitch Massacre” which is a humourous story of the Arctic present (circa 1990) and “Film Nord,” a farcical detective story starring an Inuktitut RCMP officer and her trusty dog. This fascinating collection is both engaging and educational.

Classroom Connections: This anthology can be used with intermediate and senior-level students in visual arts, literature and Native studies classrooms as a vehicle for exploring historical, social and cultural aspects of Inuit and Northern indigenous peoples. This graphic collection is a great resource to promote literacy initiatives and also motivate reluctant readers through the reading strategies of asking questions and making connections to the text. Arctic Comics is a text that will support a deeper awareness and understanding of Inuit and Northern indigenous studies.

This review is from Canadian Teacher Magazine’s Sept/Oct 2016 issue.

“From the Mountains to the Sea” Series