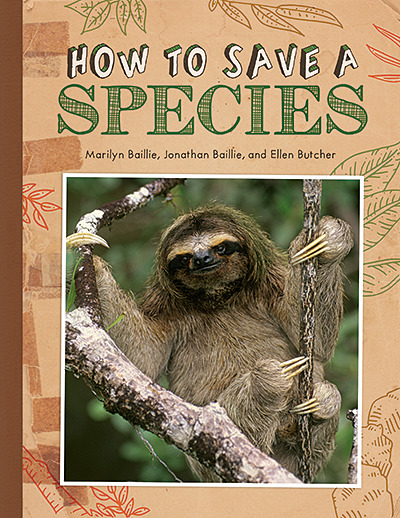 Previously published in 2013 in the UK under the title Very Wonderful, Very Rare, this slim volume examines some of the world’s most critically endangered species. Seventeen are featured (although the work also includes a top one hundred list), from humpback whales to Mauritius kestrels, with information on habitats, threats, estimated numbers and action plans to prevent extermination. In addition, ten scientists who have worked to save these endangered species are featured in sidebars. Some of the stories are upbeat in nature (the recent return of the black robin and the reintroduction of the Przewalski horse, for example) while others are simply chilling (there are only four living Red River giant soft shell turtles, for example). Still the overall tone is optimistic. The authors assert that breeding programs, conservation efforts and volunteering by the readers can help ensure that all these creatures and plants continue into the future.

Classroom Connections: Environmental education has certainly emerged as a concern across the world and teachers seeking a useful resource for elementary students in their classes (as well as something that can increase their own expertise in this area) will be pleased to have this in their collection. While the critically endangered species featured in the book are mostly from Asia and Africa, Environment Canada’s “Schedule 1” has hundreds of plants, mammals and fish that are considered vulnerable or endangered. One could easily see junior-intermediate aged students learning about those particular species, and creating action plans of their own.

This review is from Canadian Teacher Magazine’s Apr/May 2016 issue.

Autism: The Gift that Needs to be Opened

The Story of Canada

Free as a Bird